Just as we predicted in our last ETC price analysis, the 23rd cryptocurrency has descended to the macro support level at $5,3 upon forming the double top pattern on the daily time frame. The bears dealt a blow to Ethereum Classic as its gains in USD and ETH from last month have gone in the red by 1.75%.

Last week, however, was quite fruitful for Ethereum Classic that made a 15% sprint to the upside in the USDT market; 12.4% in the pair with Bitcoin; 7.8% when traded against Ethereum. This considerable price boost happened due to the implementation of the system upgrade dubbed Phoenix that made this network fully compatible with the original Ethereum blockchain. The upgrade could have served as an incentive for the bullish side of the market, especially since the altcoin market is blooming while Bitcoin is ceding the ground, but the bears appear to have the upper hand in this market.

Right now, Ethereum Classic is sitting right in the middle of a wide trading channel between $5.3 and $7.6, which, as you can see on the daily chart below, has worked well during the price cycle before the last. Therefore, it is correct to assume that the price action in the ETC/USDT market over the next four weeks will not go beyond the borders of this channel unless the entire altcoin market takes the bullish action up a notch. 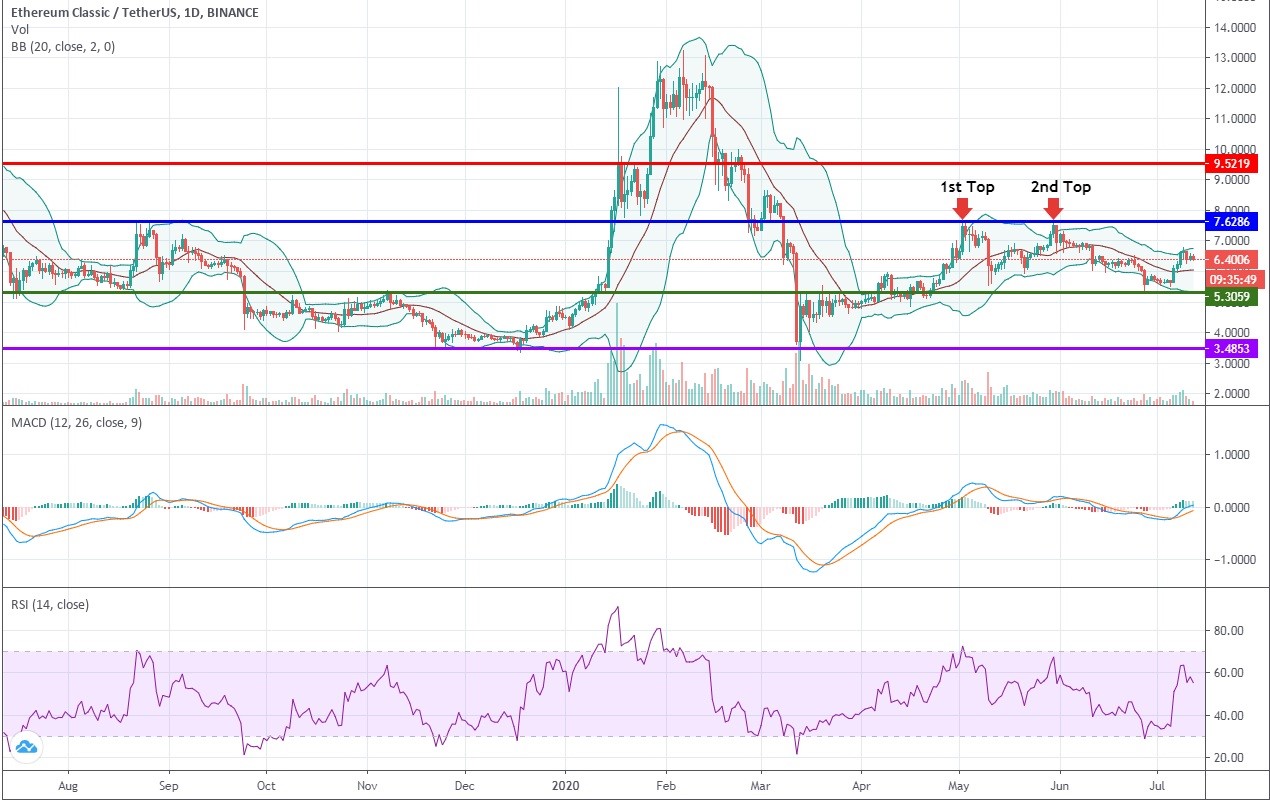 So far, there have been no evident prerequisites for another big move in either direction as the trading volume has been on the decline after the aforementioned upside spike. The decrease of volume after the impulse is usually associated with the commencement of the consolidation phase, although it is not customary for Ethereum Classic to start ranging in the middle of the designated channel.

Therefore, traders are likely to witness at least a 10% move sometime next week. Judging from the showings of principal indicators, the move is likely to be directed to the downside. However, there is also a possibility of a dash to the upside in the direction of resistance at $7,6, in case big players would want to shake down the hasty traders who would jump the gun before the price even approached the resistance. In that case, we are likely to see the emergence of the triple top pattern that would add to the overall bearish context of this market and confirm the price reversal.

The RSI is sloping down after a huge spike from 35 to 63, which coincided with the last bullish impulse. However, we already see a hidden bullish divergence as the indicator made a lower high while the price remained flat;

MACD seems to have reversed after the prolonged slide and the bullish crossover below zero, but the way the price reacted to it by staying flat hints at the weakness of the sellers;
The price is now at the upper line of Bollinger Bands that has been serving as resistance throughout the current cycle of price action. Since Ethereum Classic displays the tendency towards sticking to the lower line of BB, we reckon that the price will drop to $5.3 over the next ten days.

All in all, the BitTorrent market is rather dull right now, though it still offers an opportunity for a 15% to 20% short play over the coming week.