The second cryptocurrency is experiencing all the “delicacies” of the ongoing global crisis as it has already seen all of the gains from the last year melt away in a matter of three weeks. During that time, the price reached the bottom at $85.3, which is also a  support level from the tail end of 2018, and began showing signs of recovery, although they are still quite weak.

A morning star in the ranging mist

The crisis is already three weeks old, and the market appears to have entered the period of relative stability. It is now showing signs of recovery that is taking the form of the morning star pattern, with last week’s candle being a doji. Although for this pattern to become conclusive, the current candle has to close near $160, which could prove extremely high to obtain in the present market condition. 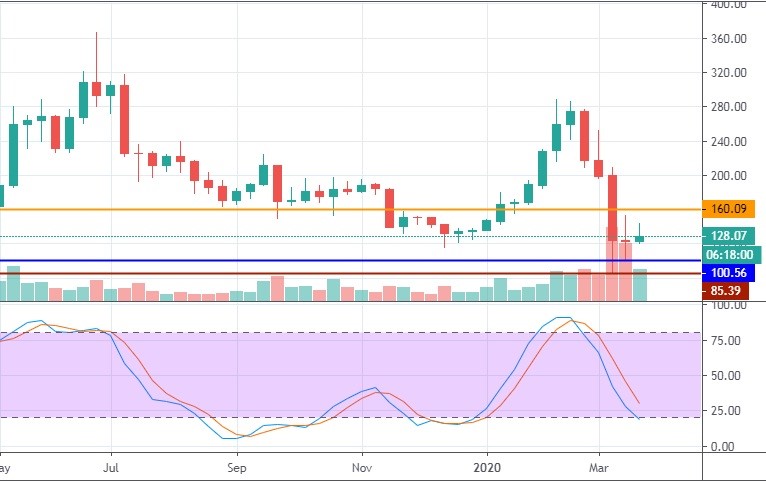 While the execution of this pattern remains feasible in theory, MACD on the weekly time frame suggests otherwise as the slow-moving average has already crossed under -25 line while the fast one remains behind at a considerable distance, which leaves room for two scenarios.

Either Ethereum is going to close this week below $130, and persists showing an insignificant growth during the next one, or traders could see the price retracing to the $100 region, thus confirming the inception of consolidation on the macro level.

On the daily time frame, however, the price action looks overly dull as it continues to move in an increasingly tight range. 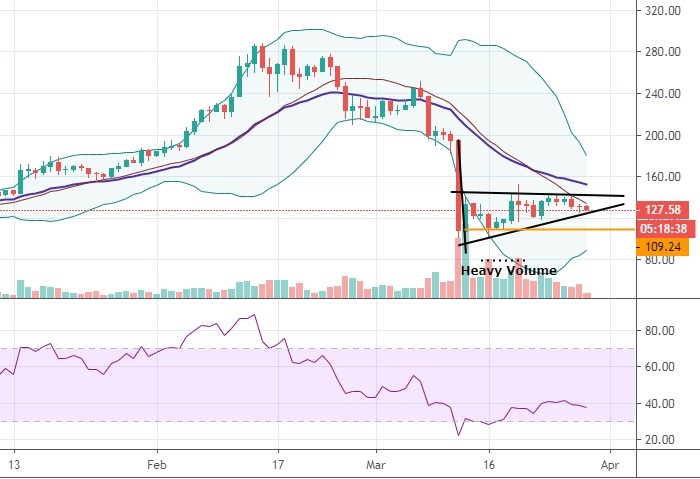 At the same time, ATR is on a steady decline after having reached the maximum level on the day of the market crash; therefore, the possibility of significant impulsive moves in either direction is getting lower by the day. Moreover, Bollinger Bands are yet to draw close to each other after enormous volatility during days of collapse, which means that traders are to expect the market to follow the present course. Even if Ethereum does attempt a move to the upside, it won’t go much higher than the middle line of BB that is flowing in the $134 area.

Historical data shows that Ethereum has the proclivity to moving within the confines of a tight range for weeks, if not months, like it did last year, in the period from mid-August, which marked the end of a minor bull market, until November.

This model of price behavior could provide plenty of splendid opportunities for scalpers, whereas swing traders’ only hope is that Ethereum would execute an exit from the already overextended bearish flag and test the 25-period EMA that runs just above the centerline of Bollinger Bands.

There is also a possibility of the big follow-up move to the downside, to the level at $109, because that is precisely the area which accounted for the largest trading volume in the post-crash period, or the territory where the whales have re-entered the market. The price history of not only Ethereum but the majority of other cryptographic assets shows that those areas tend to act like magnets that pull in the price after large actors gain their positions.