March 12 will be remembered as one of the biggest single-day crashes in the history of cryptocurrency markets. The prices of literally all cryptocurrencies have jumped off the cliff, with Ethereum losing 27% in a span of 24 hours. While this must have come as a shock for the holders of Ethereum and those who had for some reason went long on this coin in the last couple of week, traders who were foresighted enough to short this coin, as well as the overwhelming majority of other cryptocurrencies, were probably jubilant about such an unprecedented pride drop.

The obvious cause for such a panic sale was the news that came on March 11 from the World Health Organization (WHO) that had officially declared the coronavirus to be a global pandemic. This announcement caused a massive crash not only on the cryptocurrency market but on all traditional ones as well. Even gold, which is inarguably the best performer among other assets amid the rising crisis, has dropped by 3% on the day.

The bottom is nowhere to be seen

At a certain point, the price of ETH on crypto exchanges reached $123, the point which marked the annihilation of all gains made during the minor bull market of January-February, effectively making the worst expectation of those who were hesitant to sell Ethereum during the last price swing come true. Ethereum was down from $193 (the open price) to $137 at the time of writing, having established resistance at $123, which was last registered in mid-December 2109. 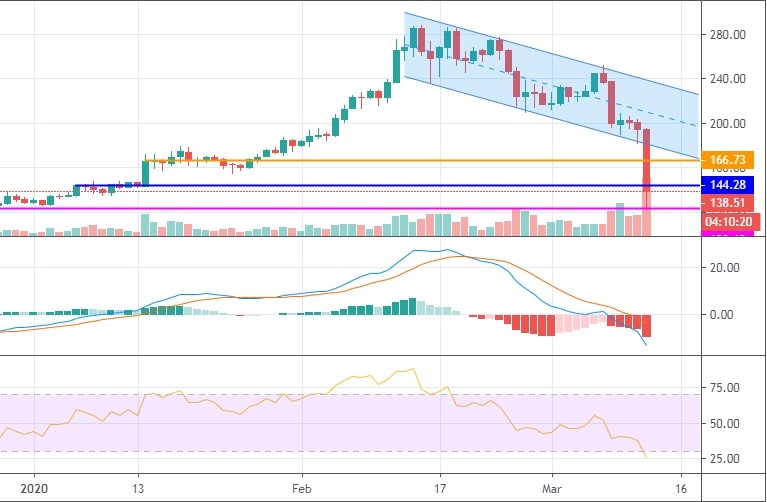 There is obviously very little chance that the price will roll back to that proper descending channel on the daily time frame, especially given that the stock markets are also in disarray.

This black swan situation has given all elements of power to the bears, whereas the bulls are left helpless, except for the miserable retracement efforts.

Nevertheless, the worst had already happened - the world has acknowledged the global threat of coronavirus, so the extreme fear should pass soon enough - it’s simply a matter of mass psychology. Therefore, we could see a slight recovery of Ethereum, with the most probable price targets being $144 or even $166, which could be reached within the next few days. But the panic is still way too intense for ETH to recover to the psychological level at $200 in a swift fashion. The best-case scenario for the foreseeable future is a bounce to the said levels, followed by a prolonged period of consolidation that would allow the market to settle down and gain enough strength to push to the lower high above $200.

In order to better understand the price dynamics, let’s take a look at the hourly chart of Ethereum. 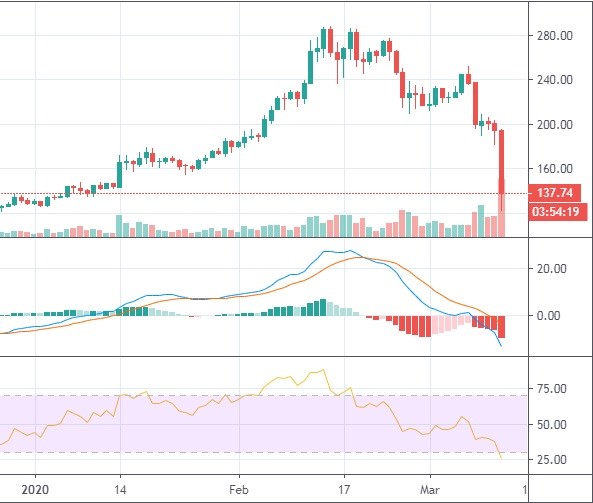 Following a massive drop, which was preceded by the three black crows mini-pattern, ETH is now in the consolidation phase, the structure of which shows that the bulls are making an effort to establish a foothold at $139, which could be crowned with success as the signal line of MACD oscillator is approaching the MA for a bullish crossover, though it would happen way below -10 level, which is the bears’ territory. The 14-period RSI is still rooted in the oversold region but shows the tendency for rising steadily.