Ethereum has been doing quite well in the last month as it has gained 17.4% and fell short only by 1.8% to equal its performance to that of Bitcoin. Whereas the hyped-up Bitcoin halving that is due to occur on May 13 won’t live up to the expectations of a powerful bullish rally that should have dragged the rest of the market along with it to the upside, the Ethereum Foundation is laying hopes on the release of the Ethereum 2.0 as the main driver of the ETH price in the foreseeable future.

The testnet is soon to be released

In one of his latest interviews, Vitalik Buterin provided some insight into the process of development of Ethereum 2.0, a major upgrade of the corresponding network that could potentially provide ETH with enough means to seriously hamper the Bitcoin domination, which currently stands at around 64%. According to the co-founder, the Ethereum Foundation collaborated with Prysmatic Labs - an international team of software engineers that already made an immense contribution to the development of the ecosystem - to launch the Topaz testnet that is said to be the final stepping stone on the path to implementation of Ethereum 2.0, phase 0.

There is still a very long and bumpy road ahead of them, but traders should have no doubt that fundamentals will be the main driving force behind the potential prolonged bullish price action that seems inevitable once the stagnation caused by the worldwide lockdown due to COVID-19 will be done with.

Bearish sentiments are negating the effect from fundamental upgrades

At any other time, the emergence of the news concerning the progress in such a vital fundamental upgrade would have sent the ETH price up by at least 10% on the day. But now the cryptocurrency market is deep in the bears’ territory, with fear being the main sentiment among the vast majority of participants.

Therefore, traders should not expect an explosive price action upon the launch of the Topaz testent, which is due to occur sometime between April 15 - April 22 - the price of ETH is way too dependent on the coronavirus-related stories and the behavior of US stock markets that outweigh any internal force within Ethereum. In these times, it would be more prudent to rely on technical rather than fundamental analysis in the Ethereum price predictions.

The weekly chart shows Ethereum running into a bearish defense line between $170 and $178, which has been a point of frequent price interaction in the past. ETH didn’t manage to cling to that area and is now being pushed back by the sellers. 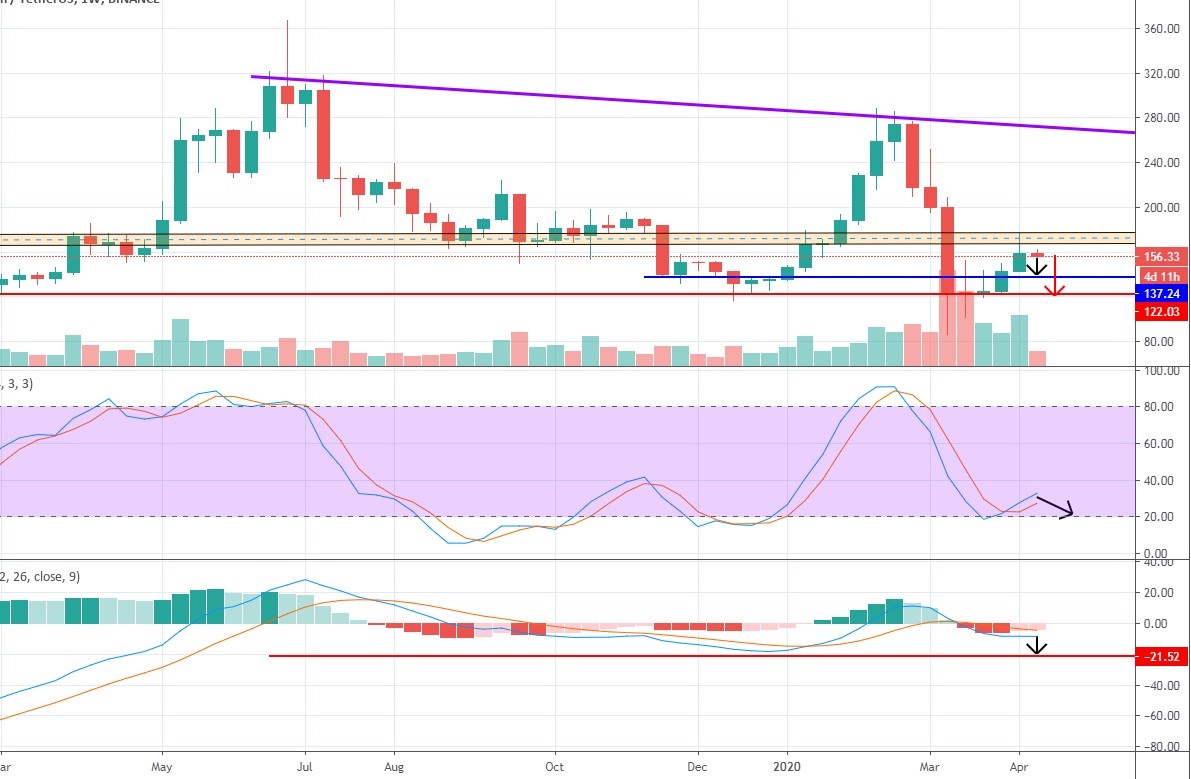 The best-case scenario is Ethereum making a healthy retracement to $137 to give the market a breather after the 3-weeks worth of bullish action. Upon that, ETH should make another attempt at $170. Look for RSI finding resistance at 20 and MACD at -21 for confirmation.

At the same time, don’t forget that the bull trap could still be in play, so a short burst to $180 with the following dump all the way to $122 is still a possibility; therefore, make sure to assess your risk/reward before entering a trade, and size your position carefully.