Ethereum (ETH) is largely considered to be the second most important cryptocurrency ever to be created. Thanks to the fact that it was created as a development platform instead of a cryptocurrency meant to be used as digital cash — it shifted the attention of developers towards blockchain technology.

This, in turn, inspired developers to come up with countless new use cases for blockchain and crypto, and to start exploring one of the most advanced and most important technologies of the 21st century. But, what of Ethereum itself? How is the price of its coin doing, and what can be expected of it in the future?

After its launch in 2015, Ethereum's price had barely moved for two whole years. It was around $10 per coin during this time, and for quite a while, it did not seem like it will ever live up to Bitcoin or other altcoins. Then, in 2017, when the prices started surging, and new coins started to emerge everywhere, Ethereum's ability to serve as a development platform for altcoins became invaluable. The coin went from $12 to $380 in only a few months in early 2017. Then, in late October 2017, its price started surging again until it reached its peak in mid-January, climbing all the way up to $1,377. 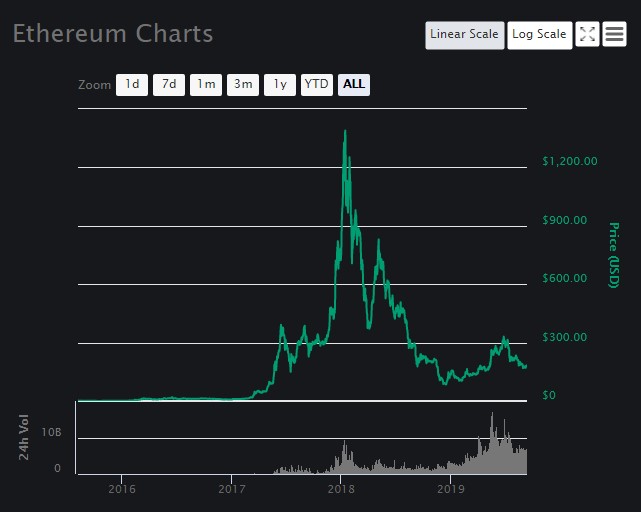 Of course, the market crash of 2018 came immediately after that, and the Ethereum price kept dropping until late December 2018. At that point, it hit $120, briefly even breaching this support and going down to $108. Fortunately, it never went below $100, although many had feared that this might be what lies in its future.

Over the next several months of 2019, ETH price started climbing up, with its first big surge starting around May 9th. Only days later, ETH managed to breach the resistance at $240, and only about one month later, it nearly reached $360. However, this was when another shift in the crypto space happened, and Ethereum's price started dropping again. The drop was sharp, and it took the coin below the support level at $240, once again turning it into a resistance.

Ever since then, Ethereum has been dropping slightly, breaching one smaller support after another, seemingly going back towards $120. 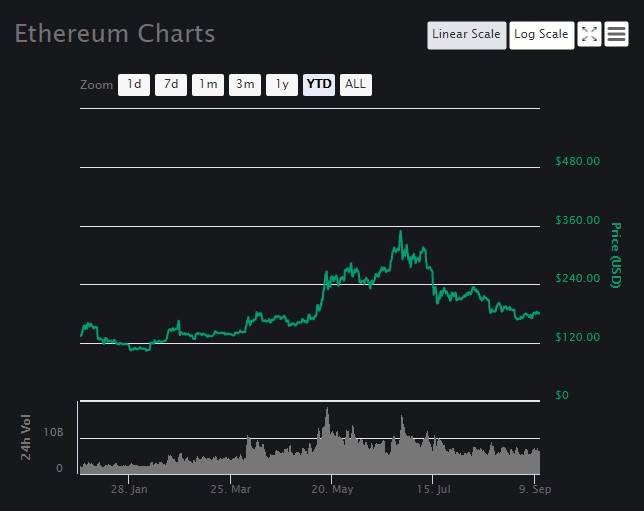 At the time of writing, its price sits at $179, after dropping by around 1.41% in the last 24 hours. So, with a situation like that, what can be expected from Ethereum in the future?

While the ETH price doesn't seem to be stable, or moving in a positive way — the coin's use cases are still as strong as ever. It is still the largest development platform in the entire crypto space, with the greatest number of dApps, and thousands of coins being developed on its platform in the form of ERC-20 tokens ant otherwise.

Ethereum's bearish behavior is not only affecting this coin, either. The entire crypto market reached its peak in June of this year, and has since experienced pretty much nothing except for drops. Even Bitcoin nearly reached $14,000 in early June, only to drop down below $10,000 and then climb back up to barely above $10,000. In other words, this is a bearish part of the cycle, and the situation will likely see a turnaround in months to come.

With that in mind, Ethereum will probably grow as well, as the year approaches its end, and right now might actually be a good time to invest in it.