The list of the top 10 largest cryptocurrencies by market cap is filled with coins that are still closely tied to Bitcoin, but even so, many of them have certain periods when they seem to have a will of their own. Binance Coin, for example, reached its all-time high only in 2019, doubling the price it reached during the famous 2017 bull run. Another coin that exhibited similar, uncharacteristic behavior is EOS.

Of course, as many already know, EOS is not a cryptocurrency meant to be used as an everyday currency like Bitcoin. Instead, this is a coin meant to be used within its own ecosystem, where its blockchain acts as a development platform. In that, EOS is more like Ethereum than Bitcoin.

The coin's current price sits at $3.30, which is not the lowest it has ever been, but it is certainly not the highest, either. This level may be considered a bottom for EOS, as its price drops stopped at $3 on more than one occasion. In the last 24 hours, however, EOS lost 0.14% against the USD, although it did see 0.15% gains against BTC.

EOS is the 8th largest cryptocurrency by market cap, which sits at $3.98 billion. Its daily trading volume exceeds $1.7 billion right now. However, its price is still at the relatively low levels, although still above its post-launch value.

The coin was launched in July 2017, only a few months before the famous price surge that took BTC to $20,000. At the time of launch, EOS price reached nearly $5, only to drop down to $1.8 a few days later. As months went on, EOS started sinking further down, and by October 30, it hit its bottom at $0.69. Interestingly enough, this is also when the coin started seeing attention from traders and investors, and it finally entered the bull run, itself.

By January 13th, EOS hit $18.16, which was its ATH at the time. Of course, the bull run had ended only days later, and the entire crypto market crashed. EOS was no exception, and it was back at $5, which was the only support level that managed to stop its drop. 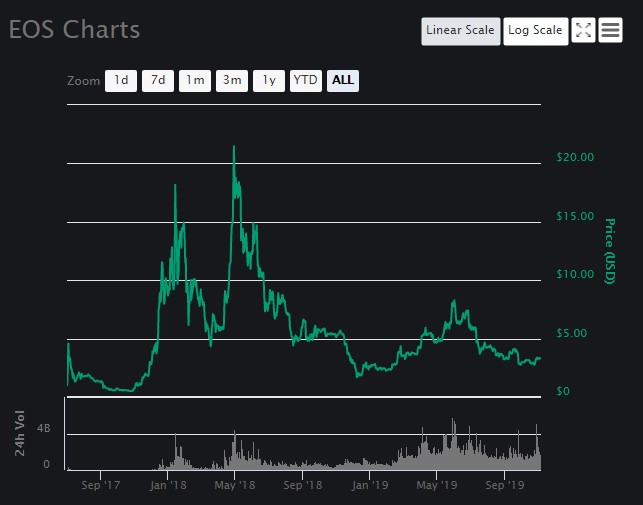 However, in mid-April, another bull run took place, and many believed that the bear market was over. While the majority of coins started growing a bit, they never really reached the levels seen in December and January. EOS, on the other hand, surprised the entire market by not only reaching its ATH, but also exceeding it by quite a bit.

The coin even managed to breach the resistance level at $20, eventually hitting the price of $21.46, before the bear market resumed, and it kept dropping further down. In months that followed, EOS once again dropped to $5, and it remained close to this level until mid-November 2018. Back then, the BCH hard fork happened and caused a second market crash, forcing EOS to break its support and sink to the old lows. The coin found its new bottom at $2.

After a few weeks at the bottom, EOS started growing as soon as 2019 arrived. The bear market was almost gone, although the investors were still cautious, and they needed time before they started working with crypto in a meaningful way once more.

However, by mid-February, EOS started taking off, and other altcoins started joining it as well. BTC opened the bullish season on April 1st surge, which was also when EOS once again found itself above $5. The bull runs continued until the second half of June, but EOS hit its highest point in 2019 on May 31st, when it reached $7.75. After that, the coin started spiraling down once more until it reached its current levels, and it has been going from $3 to $4 and back ever since.

What will happen to EOS in the future?

EOS is a coin that has potential, but it also faced a lot of difficulties. It even faced issues when it launched its own blockchain in June 2018. Its technology did get better further on, and its blockchain started receiving many great dApps along the way.

However, it is still far from being a dominant platform, and with Ethereum's new update on the way, it is likely that EOS will not surpass ETH anytime soon. However, as mentioned, EOS still has pretty good technology and potential, and it shows the will to grow even when most other coins do not. It may even decouple from BTC someday. After all, its growth in 2019 started two whole months before BTC had started its own surge, so anything is possible.