EOS appears to be doing rather well

EOS (EOS) is one of the largest cryptocurrencies in the crypto market, currently ranking as 7th on the list of largest coins. It has a market cap of $3.7 billion at the time of writing, while its daily trading volume sits at $1.7 billion. At the moment, the coin's price sits at $4.05, after seeing a 3.21% surge in the last 24 hours. EOS is also performing excellently against Bitcoin, with its price being at 0.00040092 BTC, after a 4.29% growth in the last day.

Obviously, EOS appears to be doing rather well right now, which makes it one of the few coins that do. Many other cryptos are not handling the shifting market that well, but this project — currently also the main candidate for the title of 'Ethereum Killer' — manages to keep its own.

EOS has been through a lot in the last two years since its launch. In days after its launch, its price rose to around $5, only to suddenly drop barely above $0 in mid-September and early October of 2017. After that, it started surging with the rest of the market, eventually hitting the all-time high of $23. An interesting detail about it is that this happened in April 2018 — when most coins have already lost at least half of their value, after hitting the ATH in December 2017 or January 2018.

EOS, on the other hand, performed better since it was approaching the launch of its blockchain, which served as a development platform for dApps and smart contracts, like that of Ethereum. However, EOS also started dropping sharply after hitting this level, and by the time 2019 had arrived — its price was quite low, sitting at $2.50. 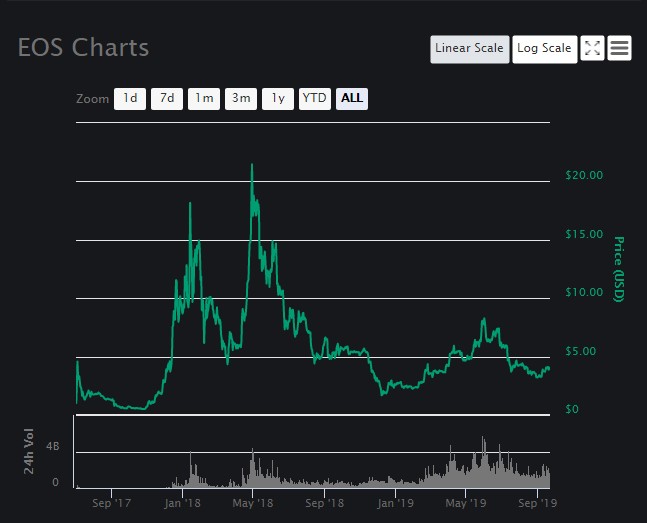 The coin performed pretty well in 2019, however, at least as far as the first part of the year is concerned. It started growing before most other cryptos, all the way back in February. Bitcoin, for comparison, did not start seeing surges until April 1st. EOS made use of every surge in the entire series that happened during this time, eventually climbing nearly half-way towards its previous ATH. It hit its peak in 2019 so far on June 1st, when it reached $8.45. 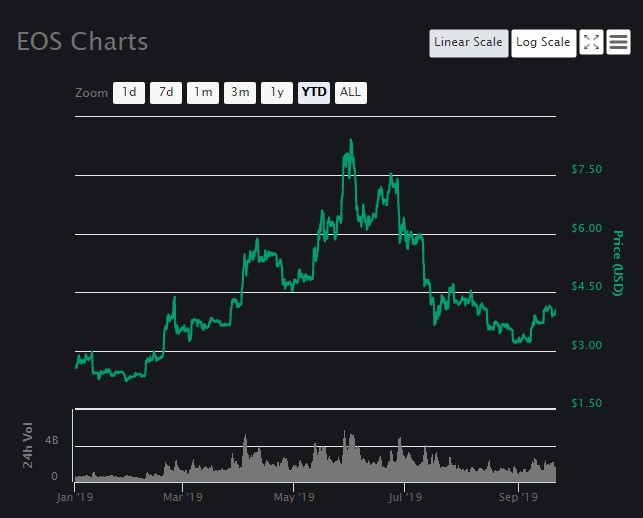 After that, it went into a series of drops which took it back down to $3.22 by late August. However, the coin's largest support — sitting at $3 — softened its drop, and EOS kept slowly rising throughout September, which led it to the current levels. It now faces a large resistance level at $4.50, but the fact that it managed to breach another resistance at $4 does seem encouraging.

What awaits EOS in the future?

As always, it is impossible to tell what any coin might face in the future with any certainty. However, EOS has shown that it has the will to grow, that it offers a competent platform, and that it has a strong community. Its daily trading volume is well above $1 billion, and it has taken every opportunity to surge, which is more than can be said even for Ethereum itself.

Performance-wise, EOS is not unlike Bitcoin. Bitcoin still performed better, as its price went more than half-way towards its own ATH, while EOS did not even reach 50% of its highest value. But, it surged enough to show that it has the potential to go back up, and potentially even reach higher levels, meaning that it can go back to where it was before, given the opportunity.