Conquering the gaming industry wasn’t the primary objective of cryptographers who gave the world the most innovative piece of tech and means for monetary exchange - cryptocurrencies. Nevertheless, that particular industry has become arguably the first welcoming haven for the new kind of digital money since the philosophy of people from both these worlds intercross in many points. Besides, blockchain and cryptocurrencies provide a host of much-needed solutions, such as monetization of virtual assets and gaming streams, as well as the means for creating a fully-fledged digital economy within a given video game.

Needless to say that such a valuable input that cryptocurrencies make to the corresponding space will increase the demand for ENJ exponentially, even in the next few years, which will ultimately be translated to a gradual yet massive price increase.

The fundamental value of Enjin Coin and its current standings

Enjin Coin (ENJ) is one of the finest representatives of the gaming industry in the crypto space. The company that stands behind the establishment of an ecosystem that makes, as they call it, blockchain gamified, was established eleven years ago. Since that time, the project has grown a substantial user base, which presently amounts to more than 20 million gamers.

In a nutshell, the solution, elaborated by Enjin, affords gaming enthusiasts to create, incorporate, popularize, and utilize the in-game virtual assets, backed by the ERC-20 compliant token ENJ.

The coin itself presently occupies the 61st place in global ranks, with the market capitalization of $72 million. Enjin Coin’s fundamental crypto-asset score is C, although its overall health score has dropped from 729 to 610 over the past three months. Nevertheless, ENJ has a risk rating of BB, which means that the coin has a stable outlook - therefore, suitable for mid to long-term trading.

The crash meant nothing for Enjin Coin

The recent market meltdown, which was already labeled as the Coronavirus Crash, exerted a serious impact on the price of ENJ by dragging it down by 64% in a span of three days. However, as we can see on the daily chart below, the actual crash occurred on the back of an average selling volume, which tells us that there weren’t that many holders willing to sell the coin but rather that there had been a momentary yet huge price gap on that day. 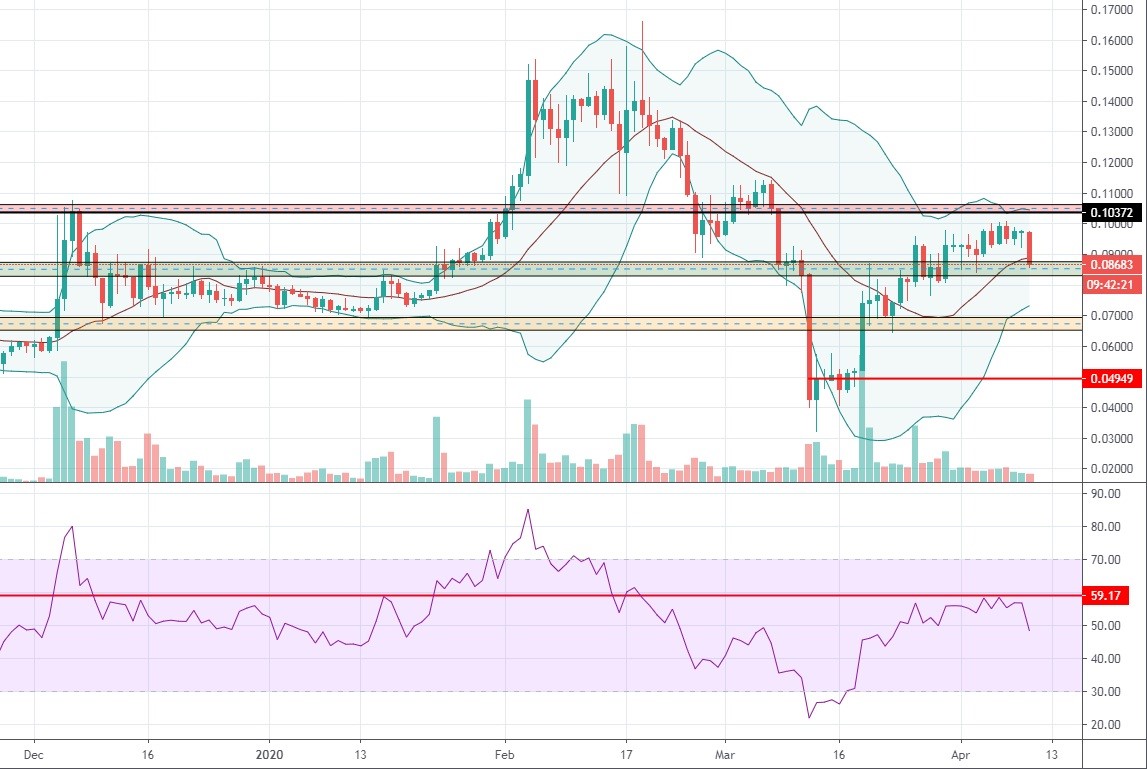 A significant price drop was followed by an immediate reaction from the bulls, who pushed the price from the interim low at $0.032 to the edge of the bear-controlled zone at $0.049. What happened then was the valiant pushback on the part of the bulls as the bears managed to suppress the price only for four days.

However, even such an impressive price gain has its limitations, as we can see from the latest action of ENJ, during which the trading volume has been shrinking, along with the strength of price impulses. The lines of Bollinger Bands are drawing closer to each other, signifying the approaching period of low volatility, meaning that the price is likely to get stuck in the area between $0.086 and $0.103 that constitute strong historic price levels. The 14-period RSI also appears to have found resistance at 59, so traders should brace themselves for the sideways action and apply their scalping skills.