Elrond (ERD) is a young cryptocurrency that was released last July and got listed on the exchange platforms a month later. As for fundamentals, Elrond represents an innovative blockchain ecosystem that should be superior in terms of the overall network throughput, as well as the promptness of transaction execution. These feats are achieved mainly due to the employment of the PoS consensus algorithm and project’s proprietary mechanism of adaptive state sharding, which makes Elrond functionally similar to Ethereum 2.0 that is still in the process of development, even though this altcoin was launched on Binance Chain, not the Ethereum blockchain.

Given the relatively short time that the altcoin is present on the market, it is ranked reasonably high (117th on CoinMarketCap) and has an adequate market capitalization of $40 million, which shows the tendency toward increase, given the coin’s latest price action.

ERD is the BEP2 type token that is used for staking, as a vehicle of exchange between users and validators, execution of smart contracts, and the allocation of validator rewards. Most trading operations involving ERD take place on Binance, which consumes up to 90% of the overall trading volume, which has fluctuated between $2.8 million and $10 million over the past 30 days. 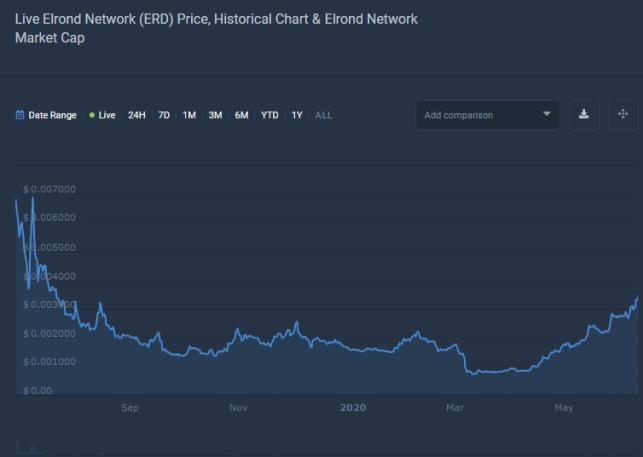 On the historical chart, Elrond appears to be forming a pattern that is reminiscent of cup and handle, though the price still needs to travel 43% to the upside to reach the all-time high at $0.0075. For your information, the all-time low was recorded on the infamous March 13 - on that day, the price of ERD sank to $0.00056. From that point forward, Elrod has been nothing but bullish, especially during the previous month, when the price skyrocketed by triple digits across the board.

Elrond is unlikely to surpass the all-time high during this bull rally, but it will surely strive to establish a crucial higher high on the macro level above $0.0063.

Awaiting retracement after a huge pump

Upon going through a month-long period of consolidation after the market crash, instigated by the coronavirus, Elrond took off to the upside in a massive move that could have been predicted thanks to the bullish divergence on the 14-day RSI. It seems that divergences are working quite well in this market as they have already allowed traders to predict the price movement accurately on three separate occasions. 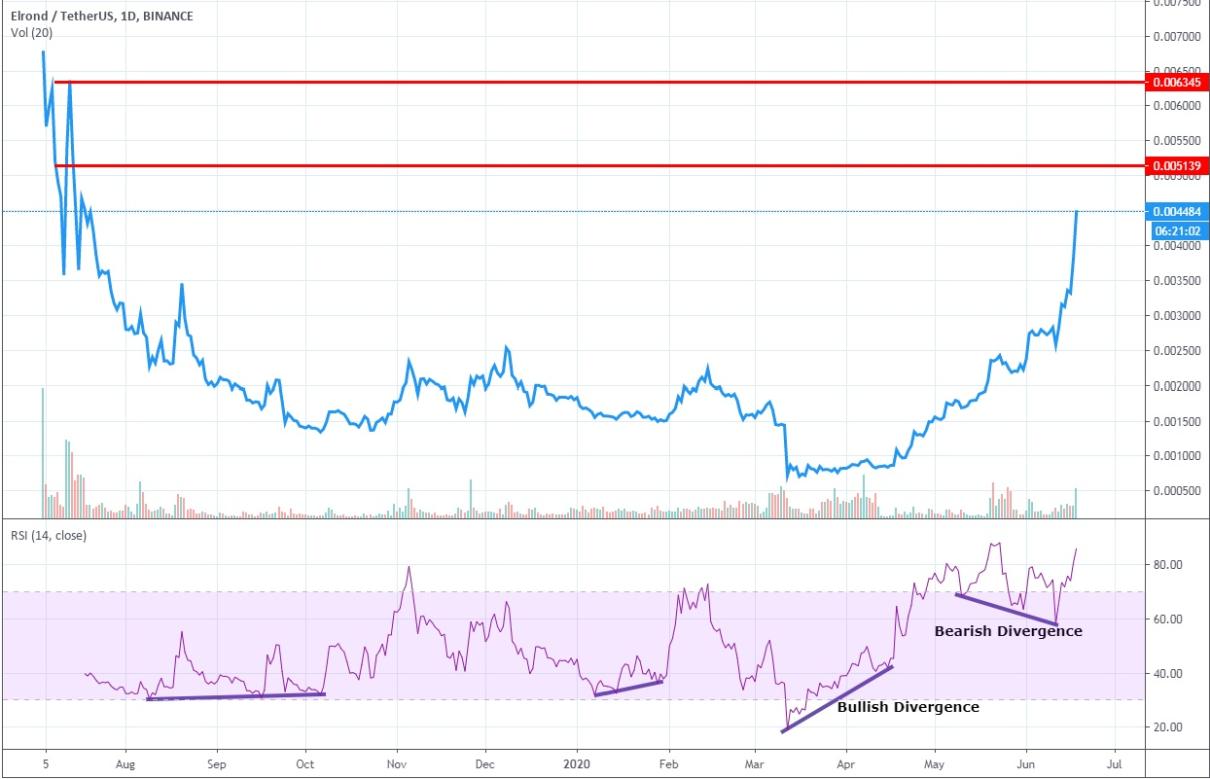 Presently, RSI shows a bearish divergence that serves as a primary basis for our ERD price prediction. Needless to say that the market already looks very overextended, although the buying volume is still rising. 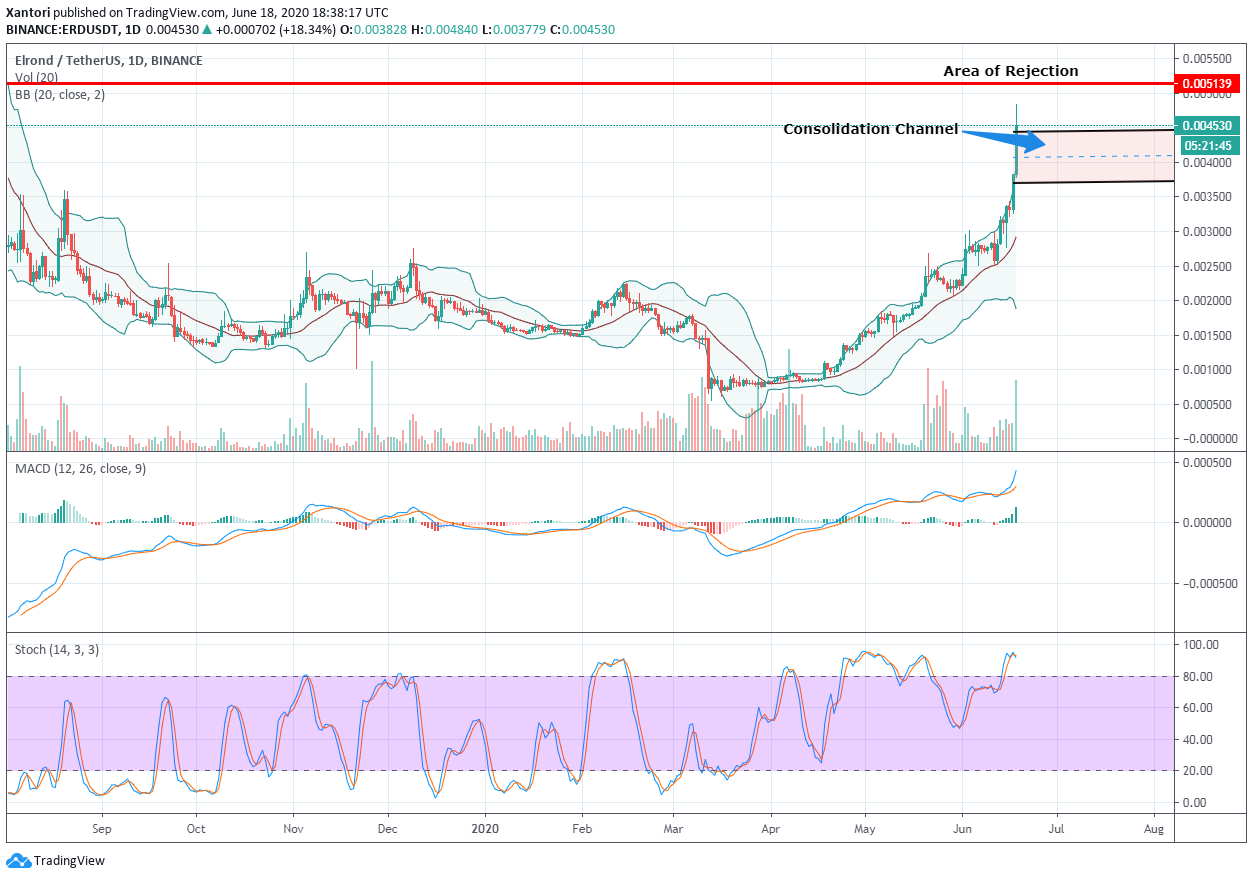 Therefore, we could expect the price to make an effort and test the resistance at $0.0051, but it is most likely to be rejected at this point. If the upside move occurs, it will take all major indicators, MACD, Stochastic, and RSI, to the overbought extremes that could trigger a mild sell-off and the subsequent consolidation in the area between $0.0037 and $0.0044, with occasional troughs to $0.003.

We predict that the bull rally of Elrond will run its course at $0.0051, and the price will enter a period of consolidation in the designated channel. ERD will reach the previous all-time high in the next ten to fifteen weeks.

Elrond (ERD): The End of the Fairy Tale Gains