Even though Decred (DRC) still maintains a fairly high all-time ROI of 1,500%, the 46th altcoin has been in the perpetual downtrend since the last massive price spike that occurred in July 2018. 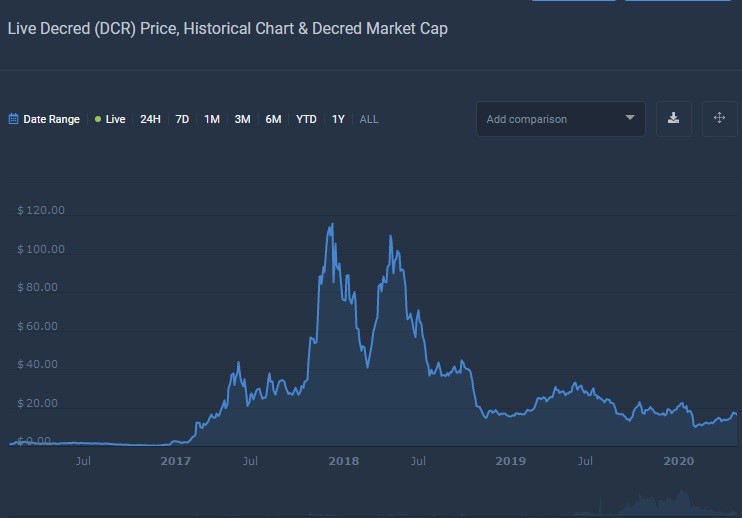 The coin has made a successful recovery after the March crash but didn’t have enough vigor to pull itself out of the zone of bearish influence, which has ultimately limited its price upside movement and didn’t allow DRC to go past the resistance at $20. It would be safe to say that Decred is certainly not suitable for traders who are hunting for gains as this coin has been disappointing in that department for quite some time now. Over a year, its USD and Bitcoin value decreased by 46%, while the last month, which was very productive for many altcoins, gave DRC only a weak 12% boost.

The bulls have no say in this market

The chart below shows that those who are looking for a long play have nothing to do in this market because everything points to the approaching bearish phase in price action. 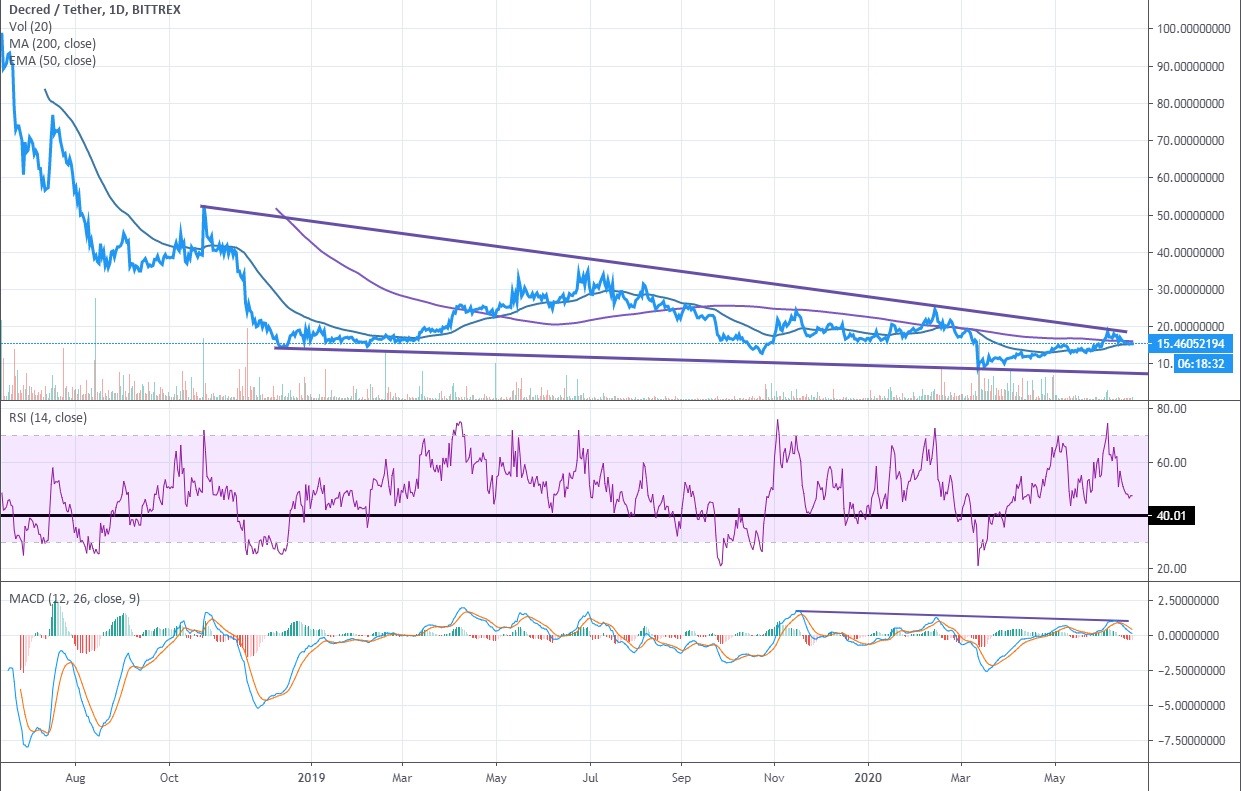 The price got rejected decisively right at the edge of the macro resistance level at $20, thus showing the bears’ intention to maintain the downtrend. Moreover, the 14-day RSI keeps on traveling southward, hinting that the current pullback is far from being over. The indicator would either find support at 40, which could convert into another 10% - 15% drop or sink all the way to the oversold area, hence forming an even deeper trough.

MACD has also been displaying proclivity towards going fully bearish by descending below the zero line, as it had already crossed to the downside with the histogram getting red, which has previously resulted in MACD sliding to -2. However, there is a bullish light at the end of the bearish tunnel, so to speak, as DRC has been shaping a falling wedge pattern that is considered as a trend reversal formation, although it is likely to be resolved no sooner than the price makes the next lower low, which is expected to be below $12 - DRC is currently priced at $15.4. 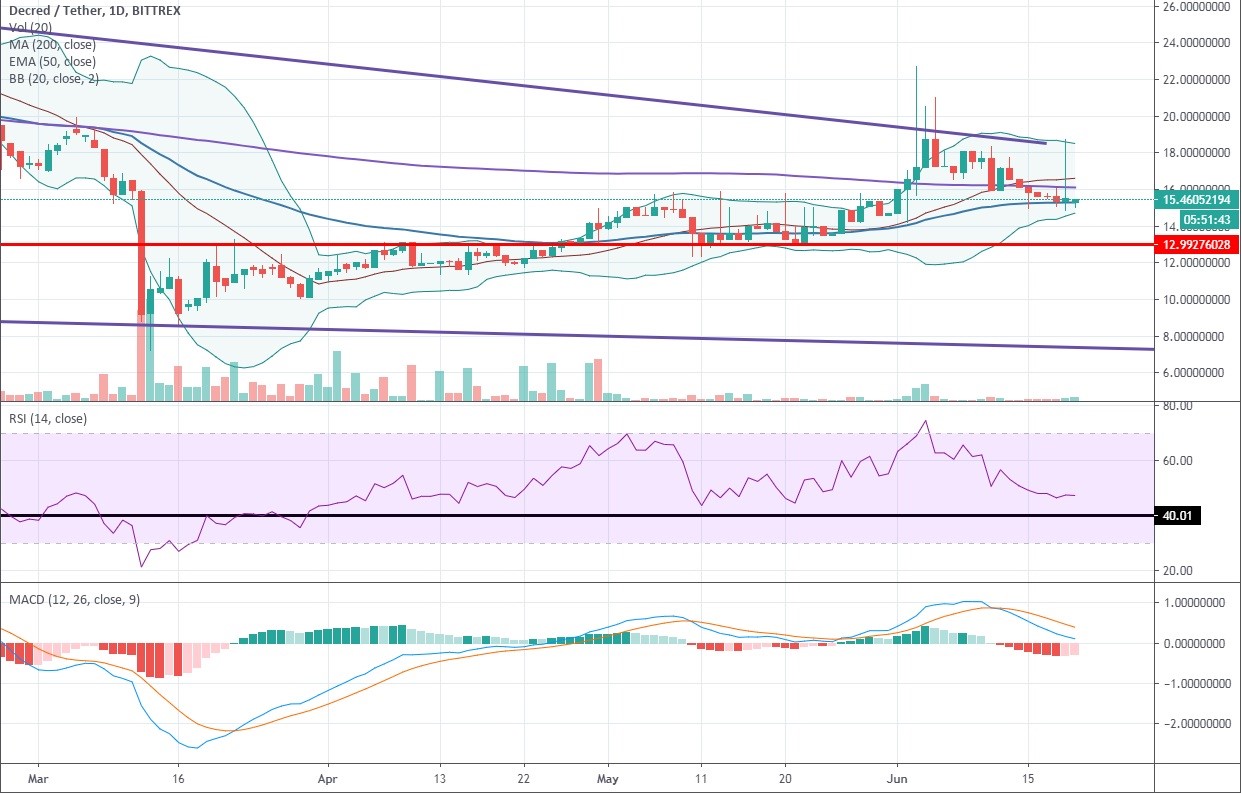 After analyzing the present situation in the DRC/USDT market, we conclude that right now is not the best time to take any position here since the price is likely to initiate a consolidation, using the 50-day EMA, and the lower line of Bollinger Bands, as support before either retesting the macro resistance, presumably at $18, and getting rejected for the second time, or dropping straight to $12.9, having another round of consolidation and then going under $12 for a chance to reverse the bearish trend.

All bearish on the Bitcoin front

The situation in the DRC/BTC pair is equally dire for the altcoin as it sank lower with regard to the 200-day EMA without even testing it, and then went on to dive below the 50 EMA. 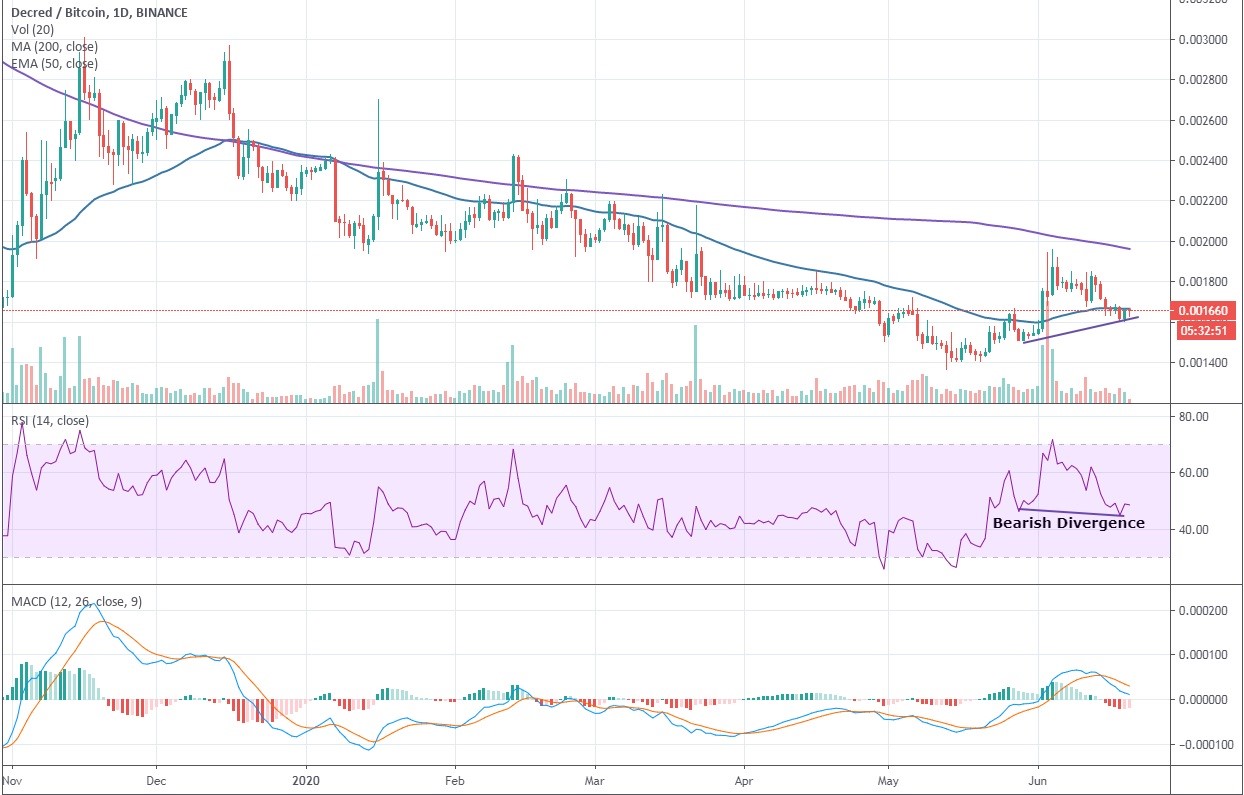 MACD shows the same bearish inclination as in the DRC/USDT pair, whereas the 14-period RSI has formed a bearish divergence, which is the main prerequisite of the upcoming decrease to 140,000 satoshis.