Decred can be characterized as a cryptocurrency that doesn’t make any splashes on the water. The coin hasn’t been making any loud appearances in the newsreels, except for the project’s cooperation with Feleman Limited for the development of blockchain-enabled governance solutions for African enterprises. There was also no announcement with regard to any upcoming system upgrades.

Therefore, Decred’s fundamental value is mostly irrelevant at this point. It is worth mentioning that the market capitalization of DCR remained stable for the past 3 months, revolving around the $200 million mark, which ensured the low-to-medium volatility of the coin over the same period of time. The average daily trading volume of Decred amounts to $90 million - a decent showing for the 35th cryptocurrency, given that its closest rivals, Bitcoin Gold and FTX Token have the volume that is 3 and 10-times lower, respectively.

There is only one issue with DCR, which is that 95% of its trading volume is accommodated on a single cryptocurrency exchange, BKEX - a sure sign that the currency is prone to pump-and-dump schemes, though it hasn’t been involved in any major ones as of yet.

A bit of Decred’s price history

DRC is one of the old-timers that has been around since 2013. The coin lived through the 2017 wave of mega-hype, which took it to the all- time high of $114.15, and displayed the miracle gains in the midst of the 2018 crypto winter, although the second rise in price had concluded the double top reversal pattern, which was subsequently followed by the falling trend and the correction that still lingers. 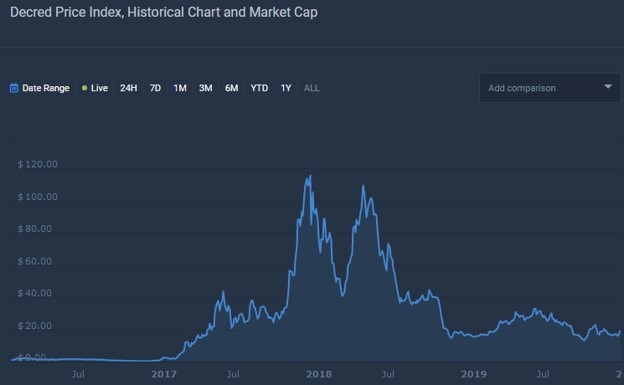 Right now, the coin is struggling to exit the correction, which is understandable, given its team’s insufficient efforts at the fundamental front. 2019 was a disappointing year for Decred as it managed to produce only 2% gains against USD while having double-digit losses in comparison to two major cryptocurrencies. However, the year 2020 began relatively well as the coin gained 40+% in two weeks but then retracted back significantly, almost to the pre-rally region, having maintained only 8% of the overall gains.

The daily DCR/USDT chart shows that since the inception of the year, the coin had gained 47.5%, formed a false bullish flag, and now it’s falling to the previous support at $16. Presently, the coin is trying to regain its position by testing the $18 level, but judging by the fact that these efforts are accompanied by insignificant trading volume, they are most likely to be futile. 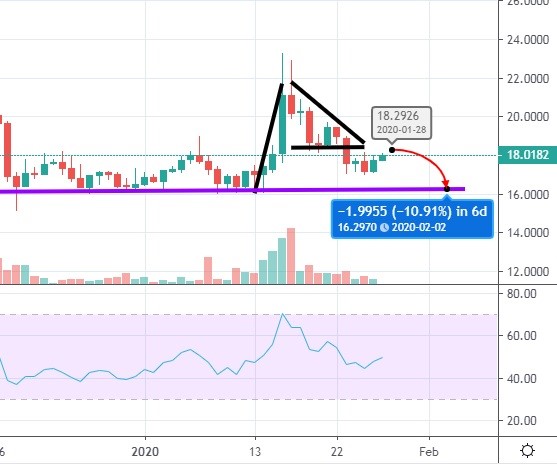 Although the 14-day RSI is moving in the neutral zone, it hasn’t approached the overbought territory since last October, so a trip to the downside should happen sooner rather than later. On the chart, we see what could be the emergence of the three advancing white soldiers pattern, but any conclusions now would be far-fetched. 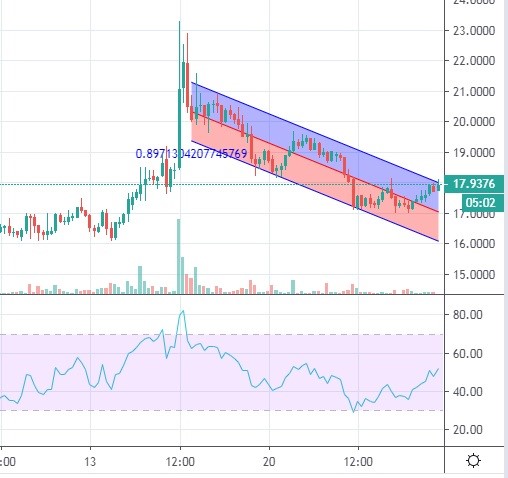 On the smaller time frame, DRC has already begun moving in the descending channel, with no substantial buying volume to provide for a breakthrough to the upside.

The bottom line is that Decred is currently a prime candidate for shorting as it’s already in the late stage of correction after a brief rally. Basically, those who bought this coin for $16 now have the last chance to close their position and take a minimal profit.