Even though Decentraland (MANA) is far from being a highly-ranked cryptocurrency - it presently occupies the 104th spot on Coinmarketcap - it has unique and noteworthy fundamentals, which should find broad application in the virtual world that has been longing for a proper system for monetization and value assessment. 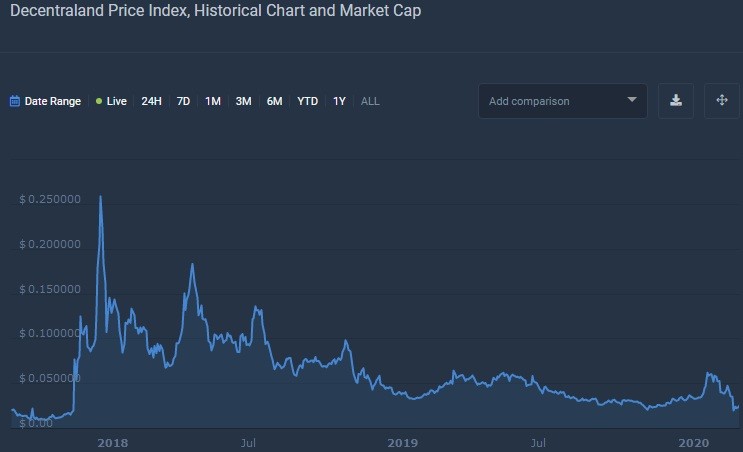 In a nutshell, Decentraland is an ecosystem that’s been built on the Ethereum blockchain that provides means for profiting from making and distributing different virtual content, for example, digital land and items of property. The holders of MANA believe that it would become an integral part of the future system of decentralized finance; therefore, traders who build their portfolios around cryptocurrencies that represent the concept of DeFi should definitely pay attention to Decentraland since it has the potential to disrupt this space in the near future.

But these are the long-term prospects for this coin, which are most certainly bullish, but right now, traders are more interested in whether or not MANA is capable of providing immediate profits.

If we were to characterize the price action of Decentaland over the past couple of months, the proper word would be “smooth.” The daily chart shows that the coin has been moving fluidly along the 50-period exponential moving average, employing it as support/resistance on numerous occasions, especially during the last uptrend which ended in a disastrous crash that must have caught many traders by surprise since it struck them at the very beginning of a seemingly healthy pullback in the downtrend.

This somewhat unexpected nosedive must have taken out a massive amount of stop-losses, thus only aggravating the situation which resolved in Decentraland smashing different support levels like a glass floor and stopping short of the all-time low at $0.00923 by a mere 2 cents, bottoming out at $0.00118. 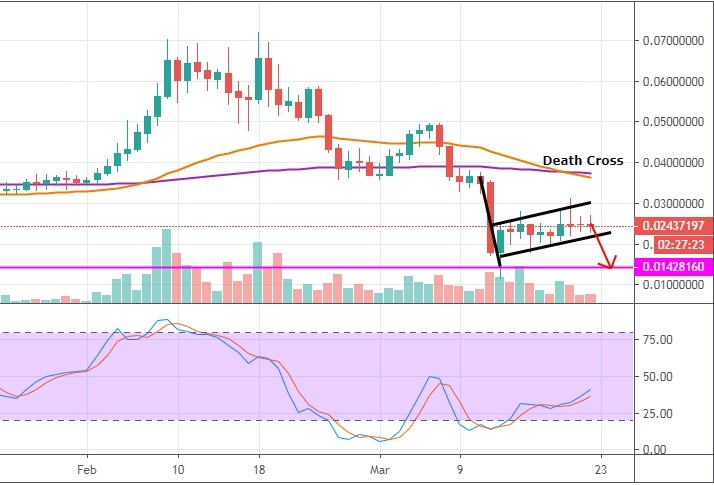 What is interesting about MANA is how swiftly this innocuous-looking coin has adapted to the crisis situation and began a gradual recovery. The fact that traders didn’t abandon Decentraland after the landslide of prices serves as proof of the popularity and resilience of this cryptocurrency. In the period from the 12th of March until now, the average daily trading volume has never fallen below $11 million and restored to its usual $19 million in just a week.

The 14th of March marked the inception of the consolidation phase during which the price even made a weak attempt at moving to the upside and testing the $0.03 resistance but was ultimately pushed back by the bears to the current $0.0024.

The overall prognosis regarding Decentraland could have been optimistic if not for the death cross that formed on the daily time frame only a couple of days ago. Given how accurately MANA cooperates with the 50E MA, and moving averages in general, the logic dictates that the price is aiming for $0.0142, which is about halfway to its recent bottom. This move could be incentivized by the news concerning a new outbreak of coronavirus, which could happen at any given moment, or the worsening prognosis regarding the global economy - the combination of which would send the markets into a panic mode once again, thus drag down the price of MANA further below the designated support.

Nevertheless, those who are devoted to the concept that Decentraland represents can rest assured that this currency will recover seamlessly once the markets regain their senses.