For quite a long time, Dash (DASH) was considered as an underperforming cryptocurrency that made a U-turn after a more than impressive bull rally from $40 to $133 during the short-lived altseason which preceded the market crash that was like a dagger in traders’ hope for the continuation of an uptrend.

In the middle of March, when all markets had been flying into the abyss, DASH made its way back to the $40 region, which must have been a tragedy for reluctant traders but also an opportunity for those who were outside the market, only monitoring it. The said opportunity presented itself in the form of a double bottom formation that began to emerge on the weekly time frame. 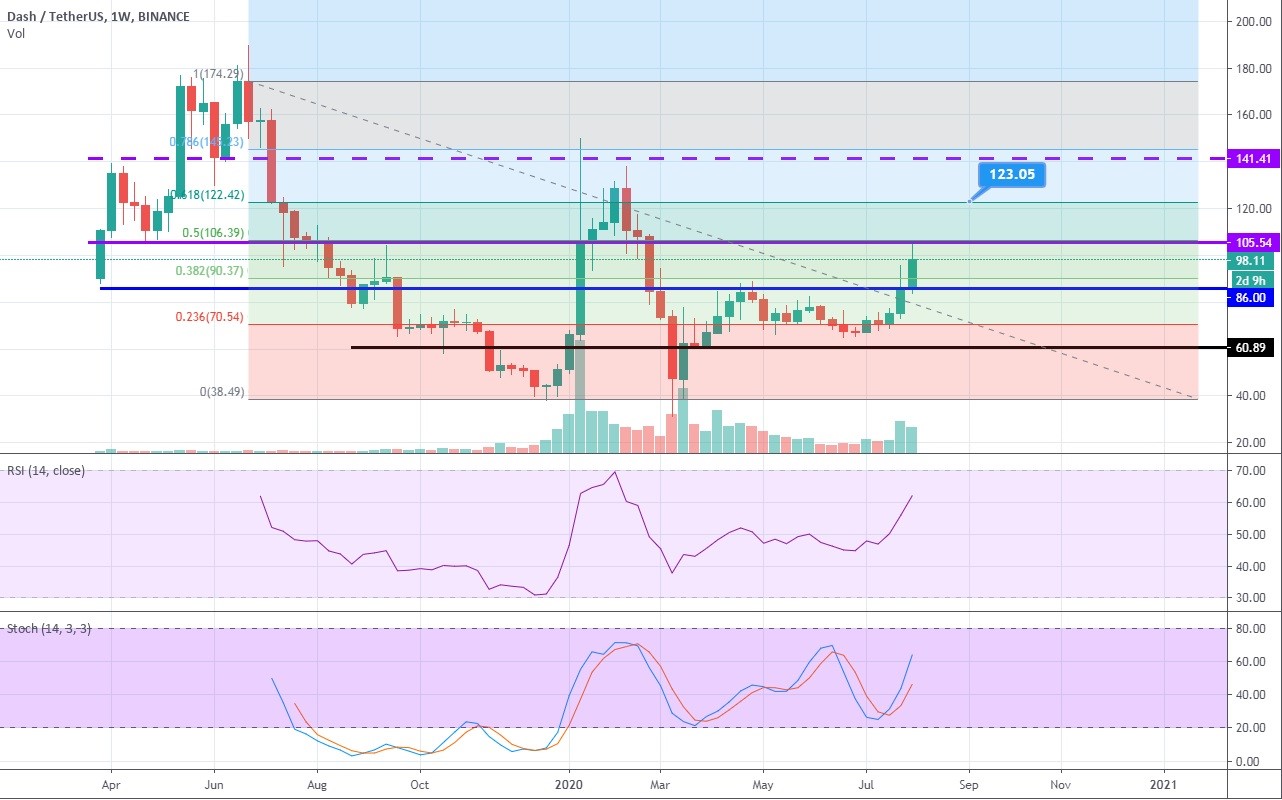 But let’s not jump the gun here, because that pattern is still far away from being positively confirmed. In order to do that, the price must make an uphill journey from the present level at $98 to $141, the final support line of the previous bull rally. Only then would we begin considering a major breakout and the initiation of a secondary uptrend. Until that happens, Dash has to overcome two major barriers.

However, there are several factors that point to the probability of a more intense bullish price action over the next six to ten weeks. Firstly, the Dash community is awaiting a major system upgrade, as per the official press release of the Dash Core Group. The next interim upgrade is due to happen at the tail end of August, whereas the launch of a new Dash testnet is expected at the closure of the year. Given how strongly other altcoins that introduced significant upgrades - Cardano (ADA) and Elrond (ERD) - rallied over the past couple of months, the news coming from the team could offer the coin the much-needed upside potential.

Secondly, DASH is making significant progress in its key market, which is Latin America. In one of the latest instances, Dash announced that it would be issuing the first cryptocurrency Visa debit card in this region, in partnership with the Mexican exchange platform Tauros. Latin America, especially Venezuela, Argentina, and other countries that are in the state of permanent economic crisis, provides a fertile ground for cryptocurrency adoption as people are looking for an alternative to their failed national currencies.

Right now, both Stochastic and RSI are clearly bullish while remaining in the neutral zone, which hints that DASH has a lot of upside fuel. We await the break of $105 to the upside with confirmation as the growing hype around the system upgrade will add more energy to the buyers.