Dash price prediction for 2020 and forward

It would be safe to assume at this particular stage that large institutional investors aren’t overly keen to make a big leap into the crypto space, as proved by the utterly disappointing launch of Bitcoin futures trading on Bakkt.

This could mean that the expected emergence of the fully-fledged bull market, which propelled the price of all crypto to their all-time highs in 2018, has been stopped in its tracks, if not reversed to a crawling bear one.

The situation still hangs in the balance and could change any minute to showing green candlesticks all the way, though a wise investor should always plan for negative scenarios, which means devoting money to the digital assets that had already shown a good track record. Dash can definitely be categorized as such an asset since this cryptocurrency combines solid fundamentals, very impressive return on investment and plenty of room for future development.

Dash was established in 2014 as a privacy coin by a team of blockchain developers led by Evan Duffield. Originally named Darkcoin, as a reference to Darknet and coin’s privacy properties, Dash had been designed as an improved version of Bitcoin that allows for instantaneous anonymized transactions through the utilization of several cryptographic algorithms; a significantly lower electricity consumption for mining purposes; the global network of masternodes for swifter transaction verification; the mechanism of decentralized governance with affords all members of the Dash network to participate in the decision-making process.

The team is continuously working on updates to the network, with the latest one, Dash Core version 0.14, expected to be implemented by the end of the year. Besides, this cryptocurrency has plenty of real-world use cases. For instance, citizens of Venezuela, who are forced to adapt to the economic hardships constantly, have chosen Dash as a safe haven amidst the galloping inflation. To summarize, Dash has a strong potential for upward growth, even despite the market unsteadiness, substantiated by its 9000% ROI.

Acting in unison with the rest of the cryptocurrency market, Dash has had a strong bull run in the period of March through June, peaking at $189.54 on June 26. After that, Dash went into a steep correction, dipping twice (in July and September) and retracing back by as many as 65.31% to the current level of $69.67, as of the time of writing. 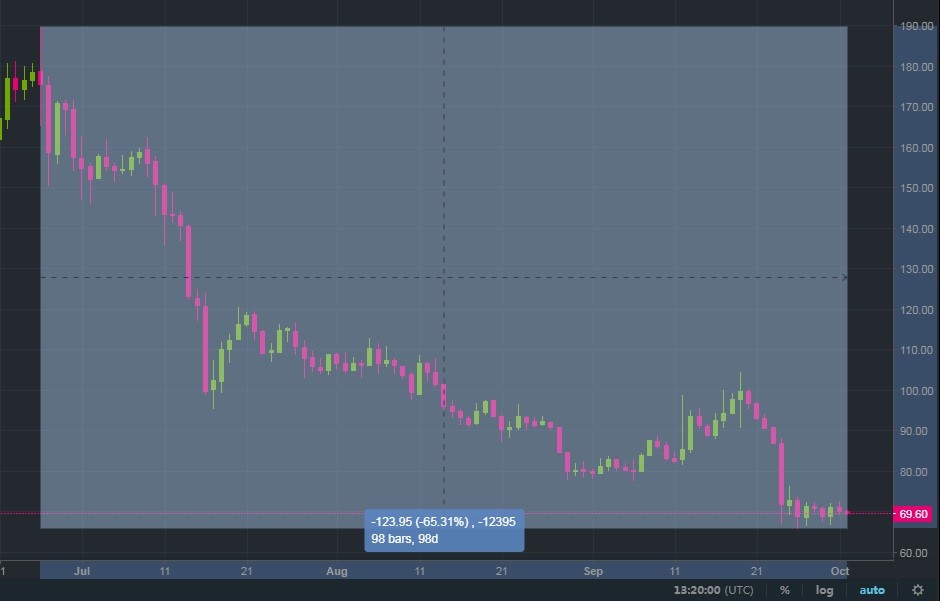 It’s more likely that the coin will continue to consolidate for the duration of the next few weeks, seeking support at $70 - $75.

The optimistic scenario dictates that Dash will recover and enter the corridor of $80 - $100, where it had been prior to the last dip, and then make a breakaway to this year’s high. The introduction of the 0.14 upgrade should facilitate that process. Otherwise, we could witness the return of the bear market.

Dash price prediction for 2020 and forward

In the long run, we should expect the confirmation with the subsequent formation of the upward trend, which will translate to a steady rise of the Dash price during the first months of 2020. The future system upgrades and real-work adoption will also drive the price forward. The approaching halving of Bitcoin should also work in favor of Dash as this coin has historically shown a substantial correlation with the price of the dominant cryptocurrency. However, given that the recovery from the current retracement might take a long time, the possibility of DASH reaching its all-time high of $1,642 next year is quite slim.