Dash is the only cryptocurrency that combines characteristics fancied by both adept of total online privacy and crypto traders, because that particular coin is fundamentally head and shoulders above its direct competitors: Monero, ZCash, GRIN, and Decred, in terms of market capitalization, total daily transaction and fees, as well as daily active addresses.

As for its price action, DASH is arguably one of the finest gainers - together with Chainlink and Tezos - among top 20 cryptocurrencies, as it has been in the green against USD (11%), Bitcoin (21%), and Ethereum (31%) over the course of this notorious March.

But traders also love it because of massive swings that the 18th cryptocurrency is capable of performing in relatively short periods of time. Those swings are, indeed, not always being made upward, but their magnitude affords opportunities for profiteering on both short and long positions.

The recovery made by Dash after the enormous 57% price drop, which shook the cryptocurrency market to the ground, has been nothing but impressive. However, experienced traders should have seen it coming, mainly because the bearish volume that accompanies the huge red candle from March 12, was considerably smaller in comparison to the bullish one that occurred the next day. This fact should have been interpreted as the weakness of sellers and the underlying strength of buyers. 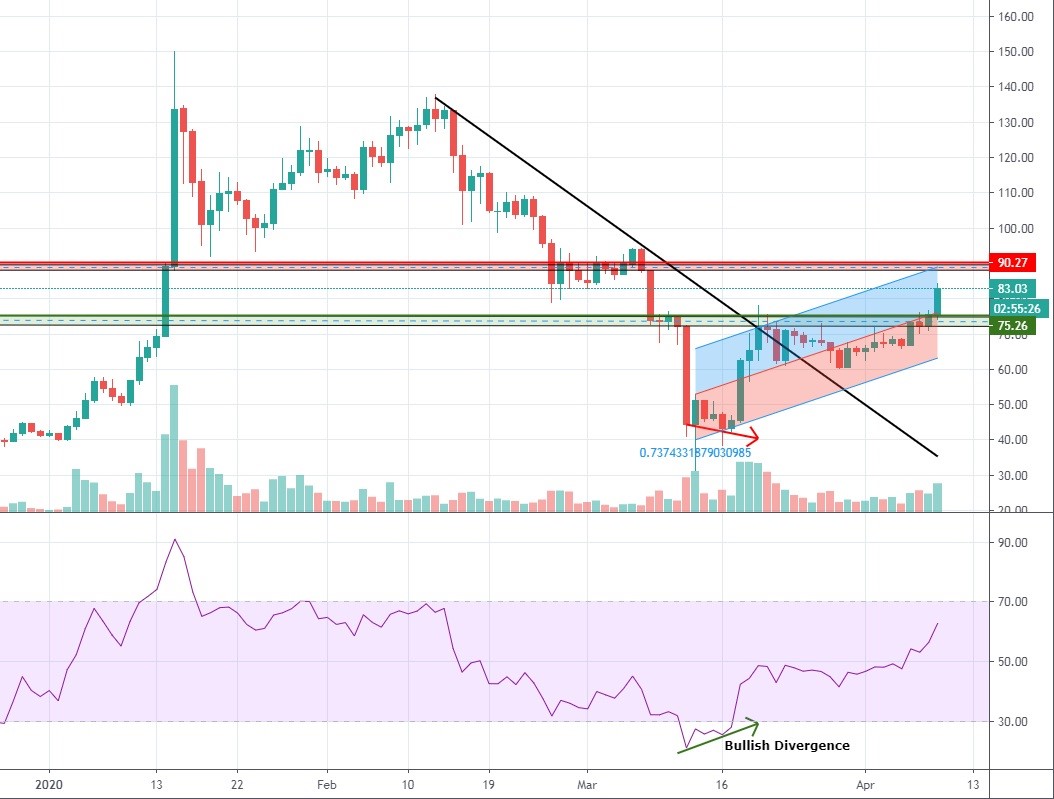 Having tested that resistance at $50 twice, which was basically the edge of a bearish control zone, DASH formed a picture-perfect morning star pattern with an overwhelming green candle that served as a base for the subsequent bullish flag formation. But most importantly,  Dash showed its total disregard for the market crisis, which must come as proof that traders and investors put a great deal of trust in this cryptocurrency and are willing to pull it out of the gutter in a short period of time.

On the basis of that behavior, we can conclude that Dash is arguably one of the three cryptocurrencies which hold the obvious bullish charge within them that could be fully released even in the present dire circumstances on the global markets.

Whereas the price action of other coins gives way to suspicion of market manipulation, mainly due to the signs of artificially inflated demand, DASH’s volume profile shows a steady, thus healthy growth that entirely correlates with the price action.

What’s also fascinating about Dash is that it has clearly broken out of a minor downtrend that lingered since mid-February. Therefore, the morning star pattern could have given the sign of trend reversal, especially since it has emerged on the back of the bullish divergence on the 14-period RSI.

Right now, the price is moving towards a stubborn historical resistance at $90 that could be a trigger point for the bears, who have been watching the price action from the sidelines. At that point, the RSI will also enter the overbought area and be perceived as a “sell” signal by the majority of retail trades.

We predict that DASH will bang on the ceiling at $90 and then retrace to $80 - $75 for some consolidation. The price could even fall lower abruptly in the episodes of stop-loss hunting. Acquiring Dash at that point would be the most appropriate strategy.