Despite taking a breather from its persistent movement with the uptrend, Dash remains one of the most profit-bearing, and volatile, altcoins out of top 20. In January, it was leaving traders gob-smacked, pumping vigorously, and increasing in price by more than 200%. During that time, the coin had renewed the yearly high at $150, which held firm since July 2019. The retracement that followed dragged the price to an apparent resistance at $100, which it had tested as many as six times before embarking on another upside swing - a much more moderate one, this time around.

In the first half of February, DASH added “only” 20% to its value, having calmed down after a tsunami-like wave of price action. 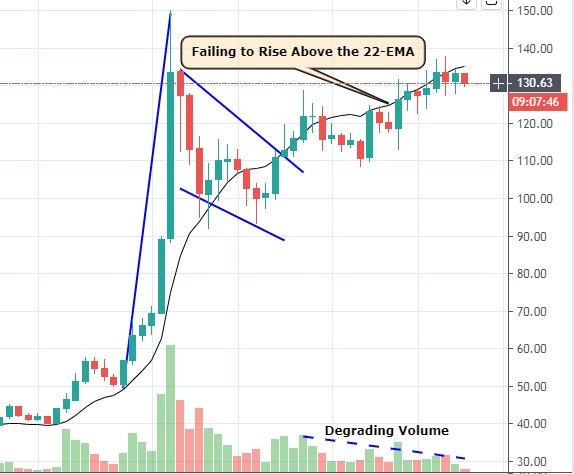 The first pullback after the immense price growth took DASH slightly below the 22-day EMA, which could be one of the reasons why the volatility has been substantially extinguished. Right now, the coin struggles to crack the EMA resistance, though it is gliding along its line without displaying any intentions of distancing from it to the downside. Such a price behavior signifies that the market is still mostly indecisive. However, the bulls have a slight upper hand due to the fact that the buyers had enough strength to take Dash out of the pennant formation to the upside - a clear sign of the continuation of the uptrend.

However, in the coming two or so weeks, Dash might not be progressing as intensely as it did in January, mainly because it is currently experiencing a sizable decrease in trading volume. For instance, compared to the trading volume recorded on January 15, which amounted to $2,7 billion across all platforms, its current volume is less than half of that, barely climbing above the $1 billion on high volatility days.

Nevertheless, the coin is successfully surviving the present decline of interest from big market players, which means that once the money begins to flow back into DASH, thus boosting its trading volume, the bulls are likely to resume the offensive and retest the $150 resistance.

Before that, the bears could push the price to $120, which would conclude a healthy retracement, but given that the altseason is gaining momentum with every passing day, the occurrence of a massive dip to the area between $80 and $100 seems unlikely, though this particular area could serve as a right spot for placing a stop-loss.

Looking at the bigger picture

On the weekly chart, DASH has been moving without a single red candle since the end of December 2019, with the price opening higher with every new candle, even despite the degrading volume. This signifies that the bullish movement of DASH could be overstretched, but the only sign that the bears could soon seize the initiative is the 14-period RSI, which is currently at 70. 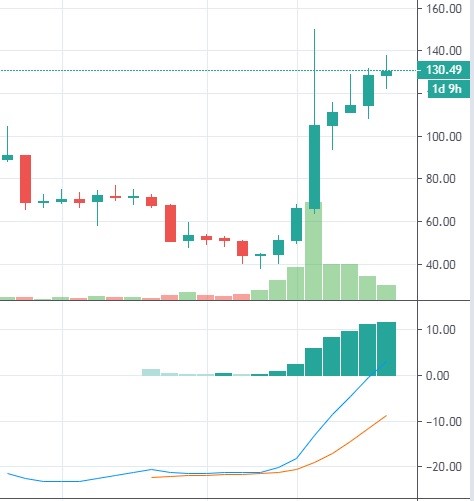 However, the MACD indicator still displays the positive value of DASH as the 12-period EMA is still way above the 26-period EMA, supported by the gradually increasing histogram, meaning that the bullish momentum is still high.

The simplest and most appropriate thing to do with regard to trading DASH is to go with the trend that is likely to keep moving upward for a while, keeping in mind the looming retracement.