The majority of all financial assets, both traditional and digital, have demonstrated a significant decline since the beginning of the massive COVID-19 pandemic. As to cryptocurrencies, Bitcoin and Ethereum were among the outsiders, both top digital currencies turned out to be the most unprofitable virtual assets during the coronavirus pandemic.

According to comparative statistics on the return on various financial assets during the period from February 19 to March 30, Crude oil has demonstrated the worst performance (a drop of 62%), followed by Ethereum in terms of loss (-49.4%), Bitcoin dropdown was -34.7%. 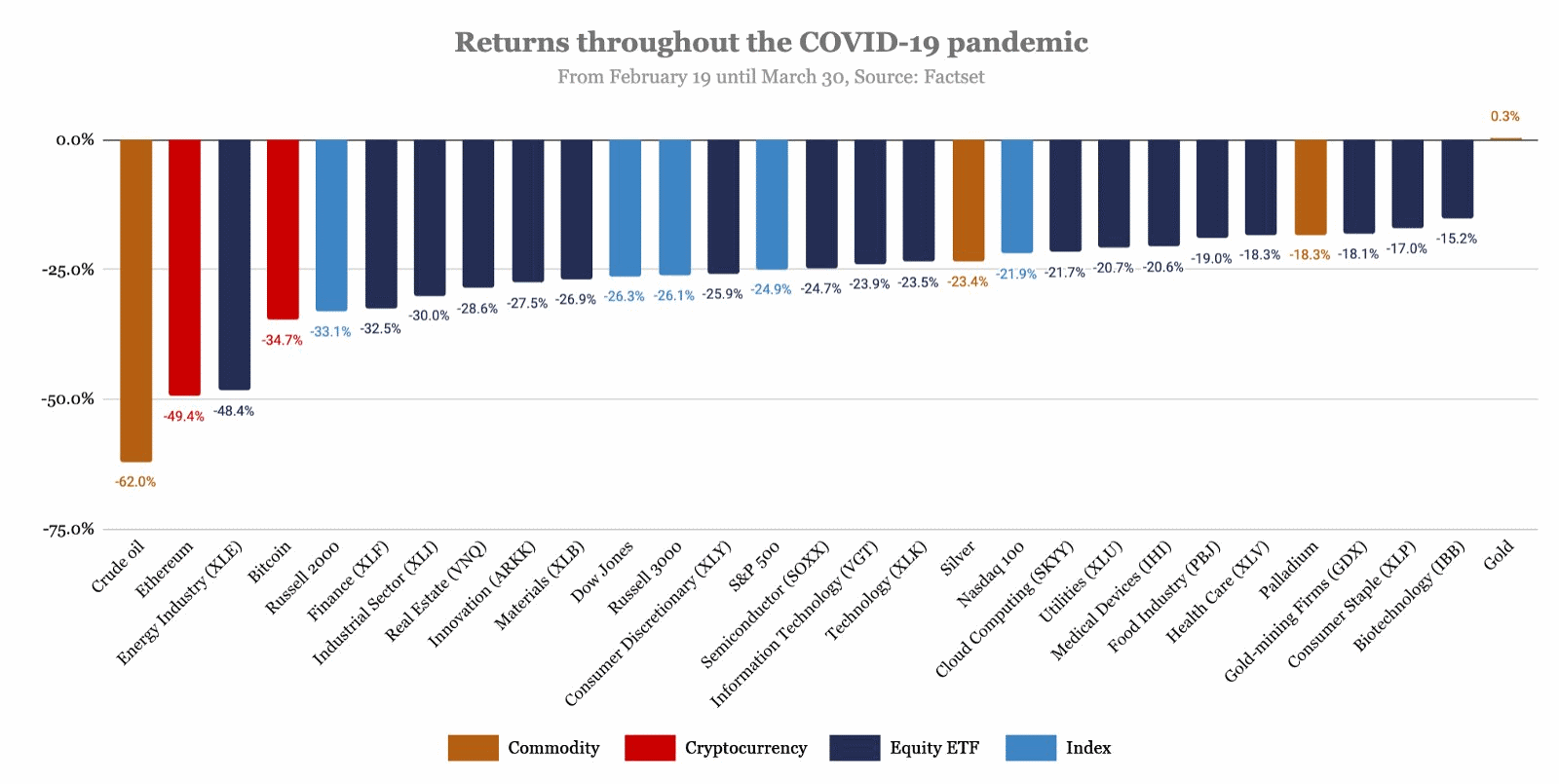 The last time oil fell so low more than 18 years ago. 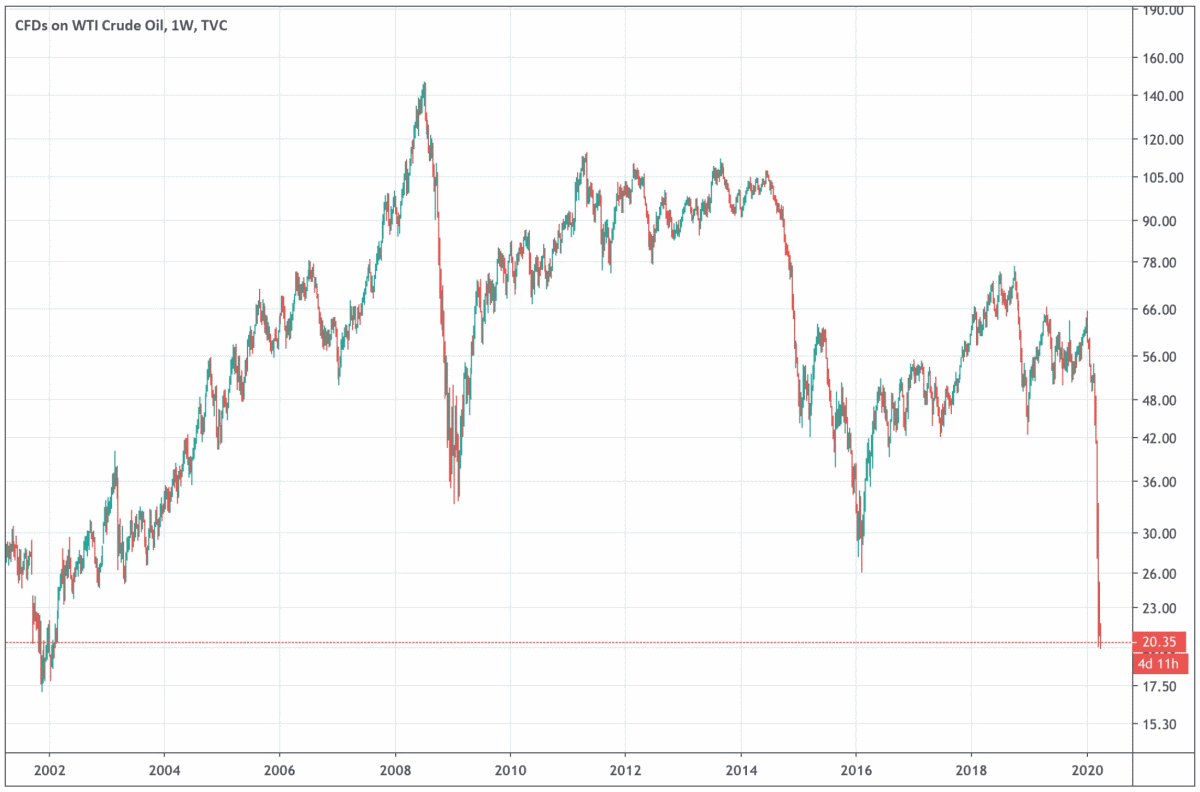 The only asset that has shown an increase in value, although it has been insignificant (0.3%), was gold. The biotechnology was the most successful investment sector, and energy and finance have been the outsiders.

On April 02, 2020 the Bitcoin's price managed to test the resistance level at $6800 and at some point Bitcoin’s price even reached $7300. But the first cryptocurrency buyers couldn’t manage to fix support level above $7000. In traditional markets, the optimism was triggered by expectations of rising oil prices after information on negotiations to reduce production. But the warring parties in the person of Saudi Arabia and Russia have not yet reached an agreement. At the same time, it is vital to understand that oil cannot grow amid global quarantine and the associated decline in demand. The S&P 500 index closed above 2500 on March 26.

The correlation of Bitcoin with the S&P 500 index goes in to decline. On April 1, Bitcoin managed to move to growth, despite the S&P 500 index negative dynamics. It is expected that the collection will become reverse soon. This can happen after the release of financial statements for the first and second quarters, when companies from the S&P 500 index reveal the real damage caused by the COVID-19 pandemic and the quarantine related to it.

Bitcoin waits for no reports. Its growth will be determined by inflation after pouring trillions of dollars into globally falling economies. In the medium term, Bitcoin’s consolidation above the resistance level at $7000 is expected, and after that a slow rise to $8000 level, followed by FOMO. The immediate goal is the consolidation just above $7000 level. This can happen in the case of a favorable external background, primarily positive for oil and the stock market, there is a correlation in the S&P 500, it decreases in the fall. If the negative scenario plays in the stock market, which is more likely, then bitcoin will stay in the $6200 - $6800 range. Its price in this case will tend to the lower limit of the interval.

What do the charts say?

As it has been expected, fixing above the $6300 support level made it possible for Bitcoin to fulfill the first growth goals with an insignificant margin of error, $7198 instead of $7300. It has happened somewhat faster than it might be expected. On the 4-hour timeframe, the candle closure worries traders, which set the previous day’s high at $7198. The rollback was sharp, and even at high trading volumes. Bitcoin price failed to gain a support level above $7000.

To continue the upward movement, Bitcoin’s price has to to stay above the important range of $6436-$6550, which is both normal support level with accumulation and dynamic confirmation of the trend.

Correction from current values to the $6436-6550 range is still possible. While the support level is at $6550, the upward movement may continue. The previous day's maximum at $7198 fell exactly in the middle of the border of the rising channel, which confirms the hypothesis of the trend forming. If the upward movement continues, the next target is at $7750 level.

The breakdown of $6550 level and consolidation below $6436 will be the cancellation of this scenario. This will force a review of the markup and a search of alternative scenarios.

Chaotic, unpredictable, but ultimately positive, such was the first quarter of 2020 on cryptocurrency exchanges. Coronavirus tried to break the cryptocurrency market in the same way as it broke the stock market, but failed. Even more: some cryptocurrency analysts have found that there are completely different reasons behind recent peaks and falls in prices of most major cryptocurrencies.

The situation around cryptocurrency exchanges and coronavirus pandemic since the end of February has evolved like this:

But another circumstance is even more interesting. If we analyze the main peaks of volatility in the last month and a half, it turns out that the role of coronavirus pandemic was secondary. But what played the main role?

This is not a COVID-19 coronavirus, this is a pyramid: PlusToken and the collapse of March 8-9

For those who are not in the know: PlusToken is a Chinese crypto pyramid that offered up to 30% per month income with its PLUS token, which was traded even on Huobi. In June 2019, several people from the leadership were arrested, scam emergerd, but the main instigators fled with money. They managed to steal about 200000 bitcoins, plus 800000 ethereum tokens.

Further, the owners of the pyramid began to periodically “merge” their bitcoins to the cryptocurrency market. Traces were swept through the mixers. Crypto enthusiasts who track PlusToken’s activities discovered the sale of 13000 bitcoins on March 7. When this avalanche of bitcoins hit the cryptocurrency exchanges, a collapse has begun. At the same time, the fall in the stock market also certainly played a role. But where one effect ends and another begins, it is impossible to say.

The major collapse of March 13: it's not about stocks, but at BitMEX

As it turned out, these were still flowers om March 8. The real “black Friday” for the BTC came on March 13th. The Bitcoin price dropped from $7900 to $3800 in just 24 hours. It all started with the fall of the Dow Jones by 10% on March 12, and this, in turn, was provoked by the fear over the coronavirus pandemic. But what happened on the cryptocurrency market further had nothing to do with the COVID-19 virus.

And this is what happened. A wave of auto-liquidation of orders has begun on the BitMEX exchange, one of the largest platforms for cryptocurrency derivatives and margin trading. The fact is that long positions have a “stop” - the price at which the exchange automatically closes the position and sells the asset. Since there were so many long “bullish” positions on BitMEX, they began to be massively liquidated. Moreover, this process grew like a snowball: orders closed, the price fell further, reached a stop at other positions, they were liquidated too, and so on. It seemed that the avalanche did not stop.

In the midst of this bloodshed, the exchange unexpectedly fell and was down for 25 minutes. Later, the BitMEX press service attributed the failure to a DDoS attack, but some people in the community are sure that this is the work of the exchange itself. Perhaps BitMEX simply turned off the trading engine, fearing that the cascade of auto-liquidations would bring the price to zero.

There is a special mechanism on stock exchanges for stopping trading in cases of panic sale of assets. For example, in the USA, such a stop occurs when the S & P500 index falls by 7%, which, incidentally, happened on March 12. But crypto exchanges do not have such a mechanism. Or maybe it is needed? Of course, if BitMEX suspended trading itself, and blamed the hackers, it turns out that the management lied to customers. But some traders believe that the exchange, on the contrary, has been waiting too long. As soon as the “failure” began, the price of the BTC went up again, having won back $2000 along the V-shaped trajectory. If the system had shut down earlier, the fall would not be so strong. And the damage to the reputation of the exchange itself would be less. 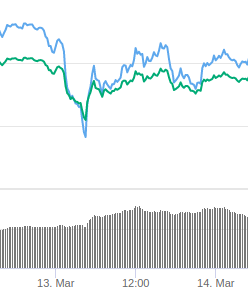 By the way, it is significant that on other cryptocurrency exchanges, the bitcoin rate did not fall below $4990 even at the very bottom. The problem clearly arose as local: it arose on BitMEX and spread to other exchanges.

Why has Bitcoin gone up?

When the Bitcoin price began to decline in the second half of February, many said: investors are fleeing from risky assets to protective ones - that is, gold. It used to be that Bitcoin was also a defensive asset, but apparently the pandemic proved that it was not. In this case, how to explain the positive chart of the BTC price after the collapse on March 13?

It would seem that things are getting worse with the coronavirus pandemic. Why did investors return back to bitcoin? Have they really lost interest in gold?

The fact is that the same thing happened to gold as to toilet paper and masks. It simply cannot be bought. But unlike toilet paper deficit, gold cannot just be taken and brought to the store. Problems arose in three parts of the precious metals supply chain.

So, investors want to buy gold, but it is sorely lacking. Their best alternative is Bitcoin, hence the growth in demand. We dare to assume that the cryptocurrency market is adapting to a pandemic and will again focus on its own problems. Of course, difficult times come for many traders, and the task of cryptocurrency exchanges will be to support them.