Crypto.com Coin (CRO) Got the Support Pulled From Under Its Feet

Crypto.com Coin (CRO) got back on many traders’ radars thanks to the way it handled the coronavirus crisis, which was going on an explosive 500% rally, after crashing briefly below the previous year’s lows at $0.025, that might have run its course at $0.18. 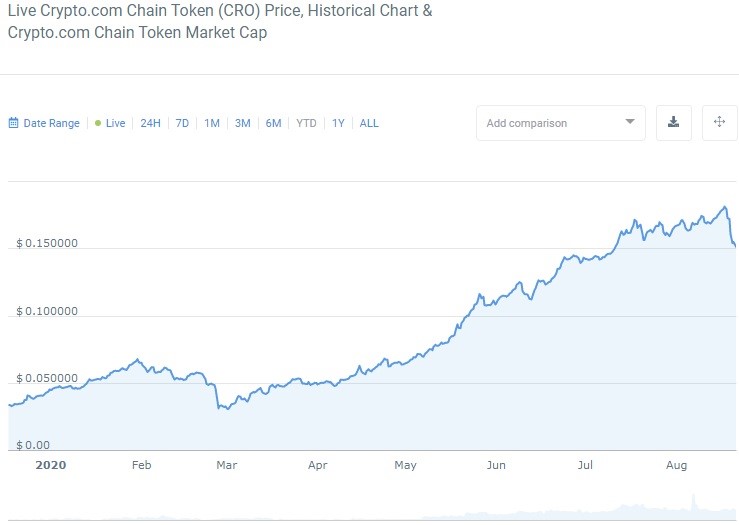 CRO had been moving persistently to the upside for the past five months without any sizable retracement to cool off the market. And now, after the bears have dealt a heavy blow to the cryptocurrency market in the last four days, a huge crack appeared on this previously smooth uptrend. In doing so, Crypto.com Coin has found itself in a tentative situation because after seeing the biggest trough in more than six months, another nudge in sellers’ direction might result in the meteoric drop of CRO’s value because the token didn’t establish any significant levels of support on its way to $0.18.

A bucket of cold water on the overheated market

A quick glance at the weekly time frame tells us that the market had been pumped up by the buyers to the point of fracture, which has opened up wide last week. 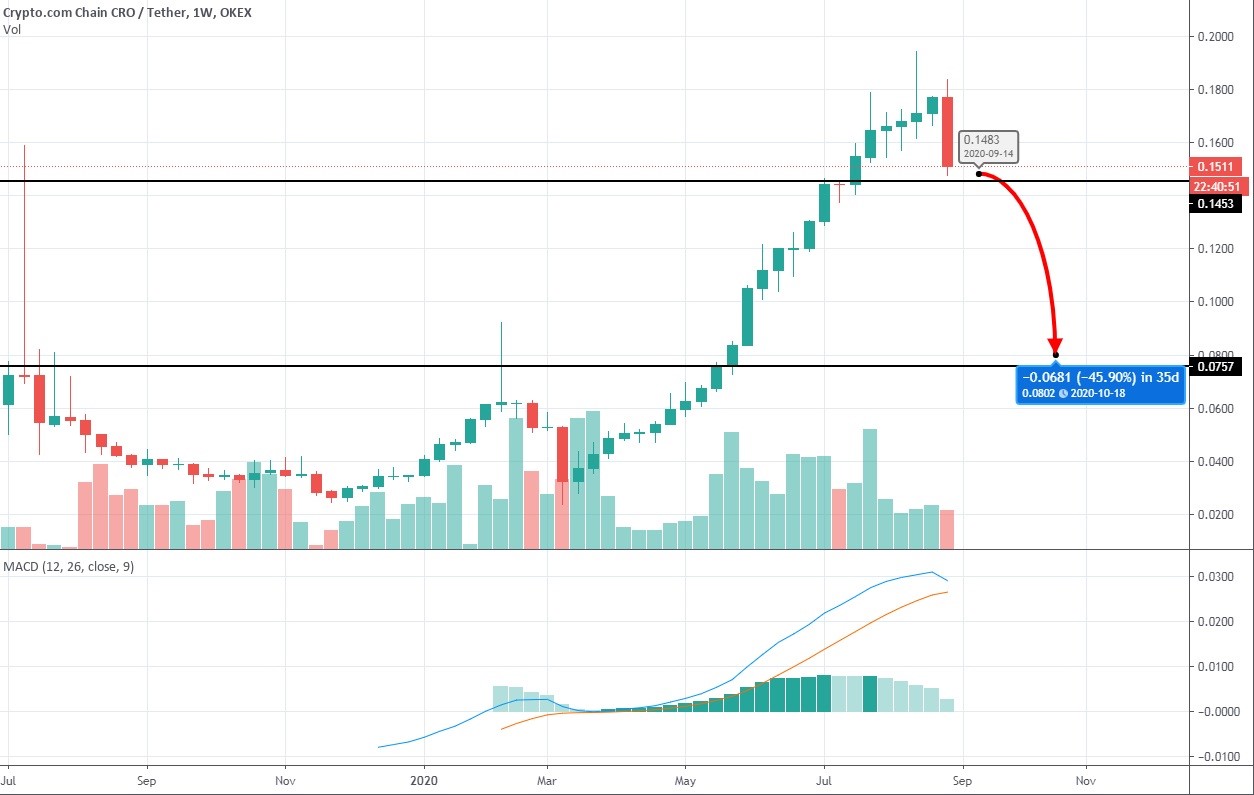 The price level at $0.075 is the closest what CRO now has to distinguishable support, meaning that in case the buyers decide to abandon this market, the price could take a massive 47% nosedive in a relatively short period of time. Considering the fact that the rejection began with a huge bearish engulfing candle that has bitten off 20% of CRO’s gains in a single move, the scales have now tilted considerably in bears’ favor.

It appears that Crypto.com Token has interim support at $0.145, the point where the market had revealed the only moment of indecision that might have gone the sellers’ way. However, it would be mighty hard to hold that level since MACD is already heading towards bearish crossover, although it’s too early to tell whether it would be a crossover or a bounce off the signal line, followed by the uptrend continuation.

Should the entire cryptocurrency market keep on flashing red for the next three to five days, CRO is likely to experience another episode of sharp price decline, with the grimmest scenario seeing it fall all the way to $0.075 and lose 45% of its current value at $0.1521. Even in that case, though, Crypto.com Coin would still draw the higher low and leave the uptrend intact. But if you don’t want to sit through the entire correction phase while having an active position in that market, you ought to have an exit strategy in place should the price start heading southward at full speed.

On the daily time frame, we have established another area of interim support, which lies at $0.12 where the price had been stalling a bit during the rally. 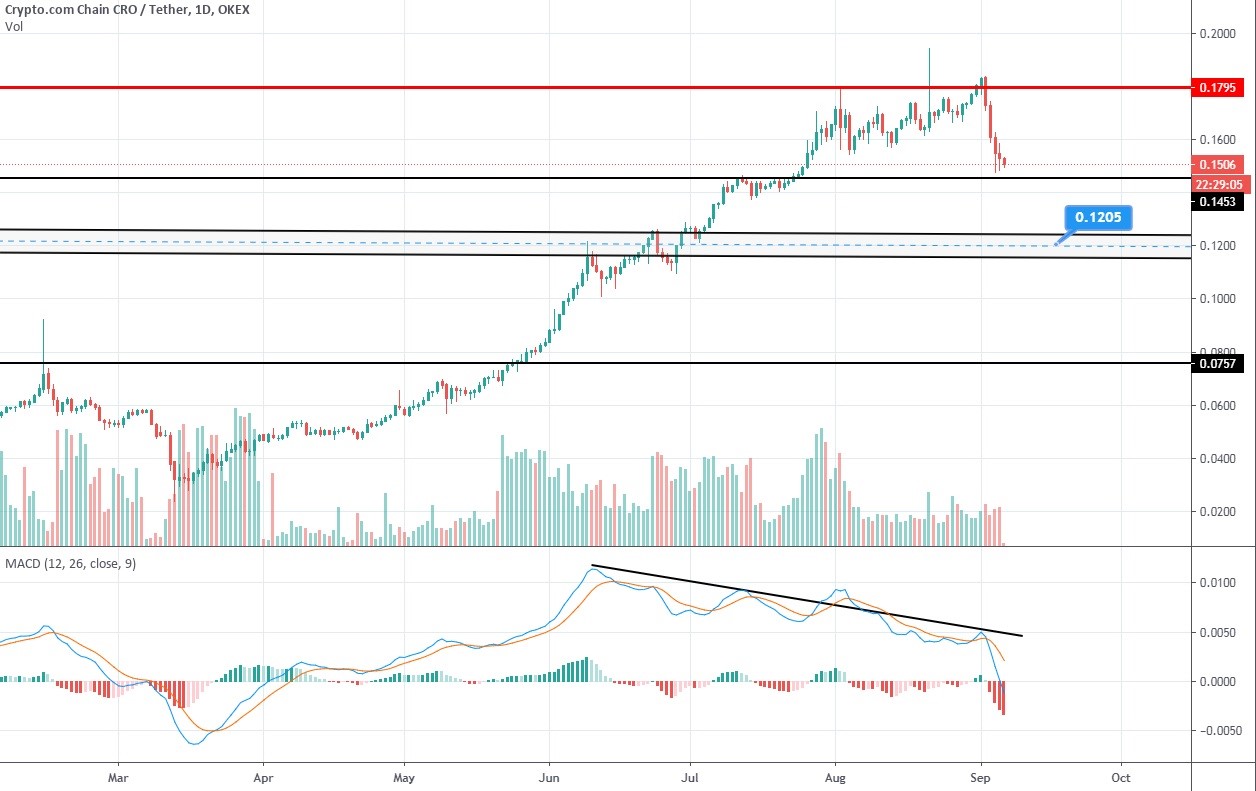 MACD had been warning traders about the approaching pullback with a clear-cut bearish divergence. Now its main MA is below the zero line, so the bears are about to seize full control over this market. Since there are no distinctive signs of reversal near $0.145, we predict the further price decline with a short bounce to the upside once the price reaches $0.12, and MACD’s signal line gets rejected near zero.