Crypterium (CRPT) Preserved the Foundation For an Uptrend

It seems that the yearned-after altseason, which many thought to have begun this January, commenced for some cryptocurrencies after the infamous market crash, induced by the coronavirus pandemic.

The gainer hidden in the shadows

One of these altcoins is dubbed Crypterium (CRPT), the coin that fuels the eponymous mobile application for crypto trading and savings that boasts more than 100,000 downloads from Google App Store. Right now, CRPT occupies the 78th spot on CoinMarketCap and has a market capitalization of $57 million, with an average daily trading volume that is somewhat insignificant as it rarely exceeds $500,000. The coin is traded mostly on such exchange platforms as KuCoin, HitBTC, and Liquid. While this trading volume is definitely insignificant for institutional traders and high-rollers, its overall price action, and especially the gains profile, provided below, is worthy of the attention of retail traders.

And if the double-digit gains in a month could be labeled as a fluke, as it happened to all altcoins at a certain point in time, the fact that CRPT outperformed all three major currencies by 200+% over the course of the year is undoubtedly a noteworthy achievement. Besides, such a massive price appreciation didn’t occur overnight, so to speak, which would also hint at some kind of price machination. Crypterium has been making gains slowly but methodically, starting from the fall of 2018, as shown on the all-time chart below. 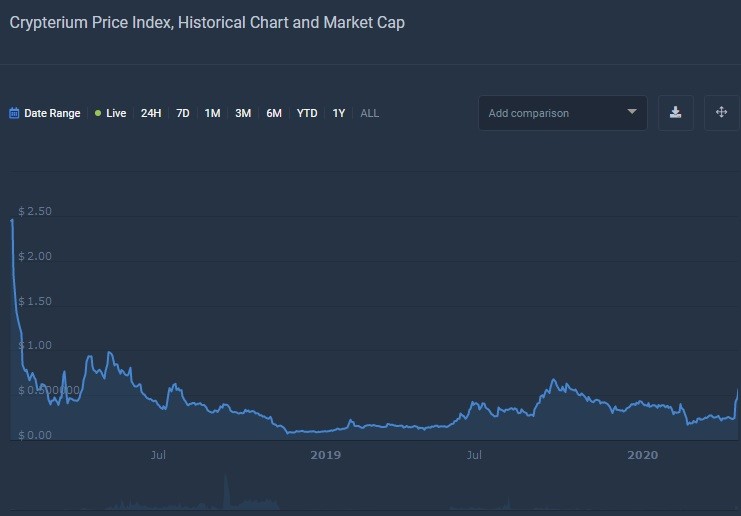 The price of Crypterium did crash right after the coin emerged on the market, straight from the all-time high at $2.5 down below $0.3, and then went even deeper to the all-time low at $0.065. But CRPT decided not to lay half-dead at the bottom, like the majority of similarly-ranked altcoin did after the crypto bubble burst in 2018. Little by little, Crypterium had been rising to the upside - in July 2019, it made the first attempt to reverse the secondary downtrend but to no avail, as it got rejected right after breaching the preceding high at $0.65, and then entered a period of steep correction which lasted for approximately six months. 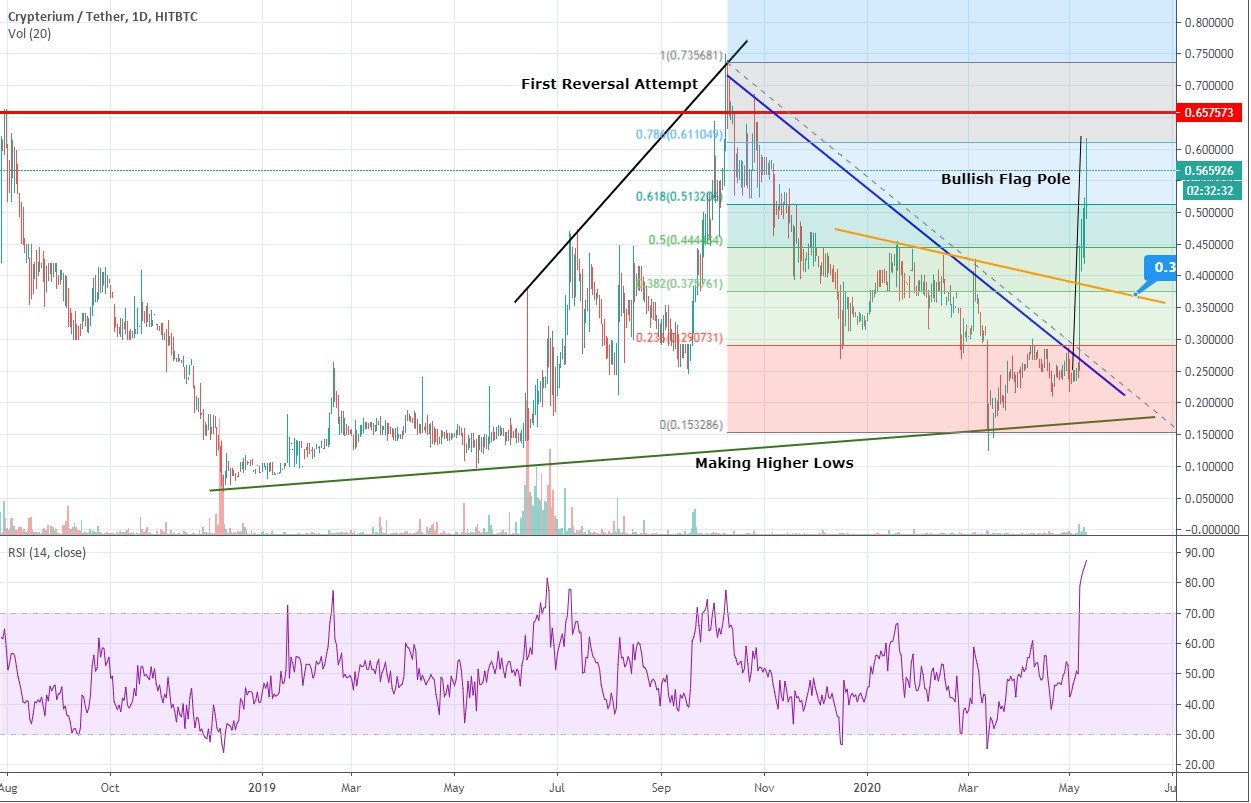 Nevertheless, even when in correction, the price has been persistently making higher lows, thus still leaving the foundation for the uptrend that could have already commenced as CRPT has aggressively broken out of the descending wedge, breaching the downtrend-forming resistance at $0.26.

The uptrend is nigh

After breaching the aforementioned resistance, Crypterium went through as many as four Fibonacci retracement levels like a knife through butter and even had briefly penetrated 0.78, the fifth one. In doing so, CRPT formed a pole of a bullish flag that will most certainly result in a retracement because this market is already severely overheated, as shown on the RSI that has risen to an extremely overbought area close to 90. Such a sharp rise will inevitably result in an equally rapid decline below 70, during which traders will see the price shrink and go below 0.5 on Fibonacci, possibly all the way to $0.3, the level which coincides perfectly with the minor resistance level colored orange on the chart. From then on, the price of Crypterium will enter a consolidation phase to prepare for the next upside swing.