Before the infamous market collapse, Chiliz (CHZ) was considered as one of the most promising young cryptocurrencies with an interesting concept and a well-functioning ecosystem. A quick reminder: CHZ is a native currency of a Malta-based blockchain project Socios that created a proprietary blockchain system for the tokenization of sports-related assets and the issuance of ERC-20 compliant utility tokens for professional organizations in the corresponding sphere.

Right off the bat, CHZ was listed on a major cryptocurrency exchange that is Binance and received an immediate traction thanks to the well-prepared ecosystem that featured the digital tokens of such globally-renowned football clubs as Juventus, Paris Saint-Germain,  Atletico Madrid, and the latest addition, the behemoth that is Barcelona. Each club was afforded means for issuing their own crypto tokens and distributing them among the supporters via the so-called Fan Token Offering (FTO) at a price of around $2 apiece.

Moreover, at the tail end of January, Socios launched Chiliz.net, a unique cryptocurrency exchange focused solely on sports-related tokens and cryptocurrencies, mainly those issued by their partners, of course.

That event had instigated an absolutely massive 193% price spike that happened in a span of two weeks. What followed this phenomenal growth was nothing less than a disaster for the otherwise attractive coin.

While the entire crypto market has been sent into a knockdown by the panic from the aggressively spreading COVID-19, Chiliz was kicked in the gut while it was already lying on the floor of the ring. In the face of the rapidly spreading disease, all football associations around the world - from the major UEFA to local leagues - arrived at the decision to halt the ongoing season for an unknown period of time to prevent the aggregation of people on the stadiums and near them. This concerned all major tournaments and even matches with empty seats. Certainly, these measures were justified, but they didn’t do any good for Chiliz, having rendered the fan tokens virtually useless for the time being.

As a result, the price of CHZ had been shot down right at the moment when it was going to finalize an accurate cup & handle formation that must have served as a prerequisite for yet another explosive move to the upside, possibly even making new all-time highs above $0.02. 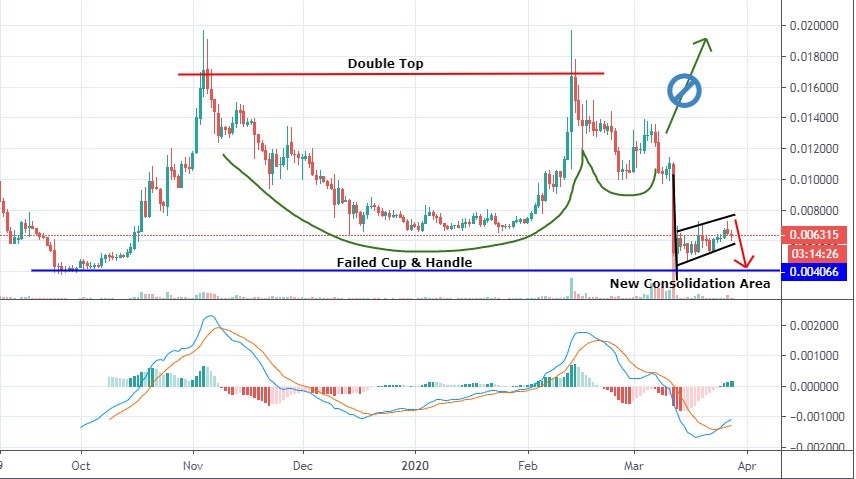 But that was obviously not meant to be, and the lucrative bullish formation has transformed into an evident bearish one - double top - which is more than appropriate in the current context. Nevertheless, the coin has proven its resilience by managing to stay afloat and not diving below the all-time low at $0.004 - turning it into a support level.

From that level, CHZ made a predictable retracement that fell into the framework of the bearish flag - now, the 99th coin is gearing up for the next move. It doesn’t require sophisticated analysis to say that having been deprived of its primary fuel - football tournaments and related activities - Chiliz’s new region of consolidation is going to be $0.004, after a couple of re-tests. Once the sports industry comes out of quarantine, traders will see an explosive growth of CHZ above $0.01.