We have a deep conviction that sports and gaming would be the first major industries to adopt cryptocurrencies and blockchain technology on a massive scale. Unlike finance, medicine, and other areas where the developers of the innovative cryptographic solution are trying to find means for wide adoption, sports has already made great progress - first at getting acquainted with blockchain and tokens, and then at implementing into their marketing strategies, related mostly to fan engagement.

A partnership with UFC provides a price boost

Chiliz (CHZ) appears to act as a spearhead in that particular regard as the team behind the coin keeps going above and beyond in an effort to establish more business partnerships with globally renowned sports organizations. One of the latest instances is the deal with the Ultimate Fighting Championship (UFC), the biggest mixed martial arts (MMA) promotional organization in the world that hosts the top-flight fights between the household names like Connor McGregor and Khabib Nurmagometov. On May 6, the UFC announced the global partnership with Chiliz, within the framework of which the so-far 99th cryptocurrency can be used as a payment vehicle when buying tickets to the events or getting access to exclusive content. 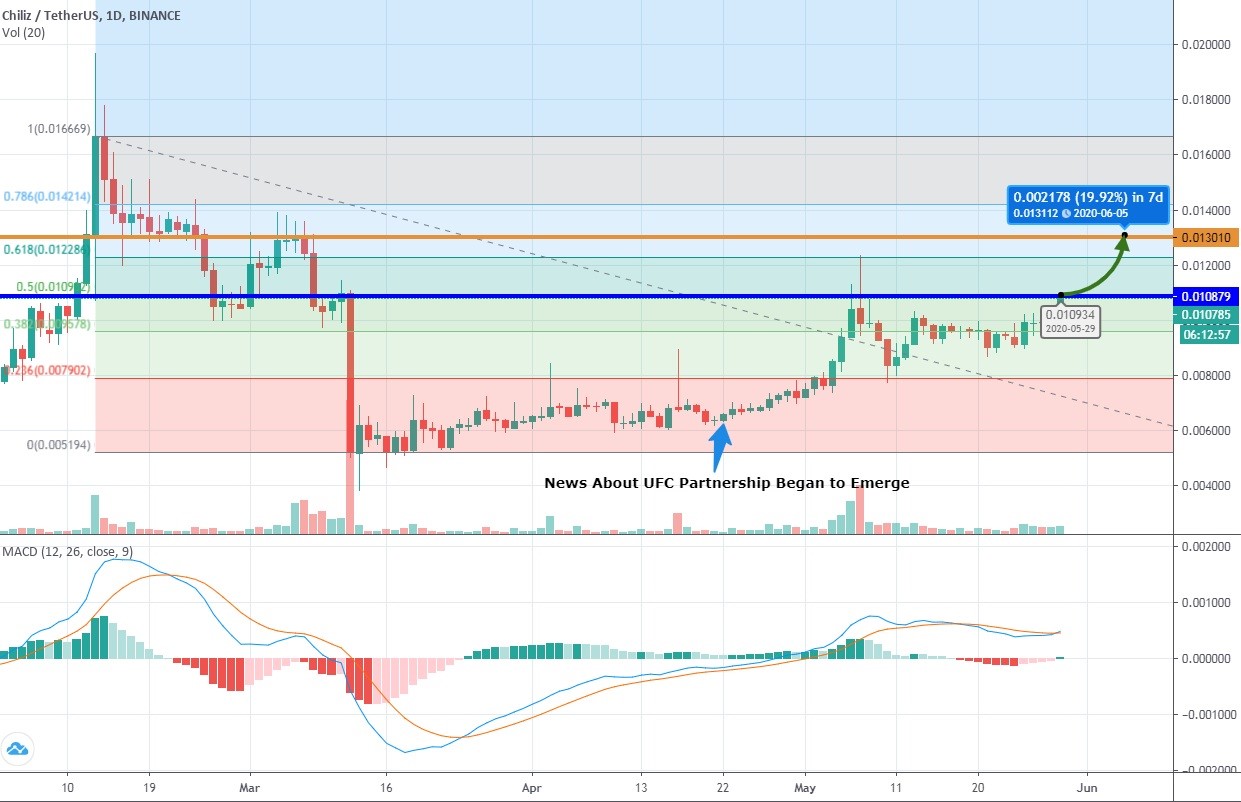 A piece of big news like that provided the much-needed boost for the price of Chiliz that had been in the state of dull and helpless consolidation after the coronavirus crash. The chart clearly shows how the price began displaying the signs of revival starting from April 22, when the rumors about the partnership began to swirl around. It took only two weeks for CHZ to gain 67% and declare the intention to repair the damage caused by the market crash.

But while the UFC deal served as a catalyst for the price revival, it’s really the renewal of the football season across Europe that is going to drive the price to the upside and possibly even above the all-time high at $0.19 in the mid-term. Once again, the reason for that lies in news & fundamentals: Socios.com, the blockchain platform that has CHZ as its native currency, had already partnered with the likes of Juventus and FC Barcelona and even issued the corresponding blockchain-based fan tokens.

However, the cancelation of all football tournaments due to the COVID-19 threat has put this initiative to a halt and drove the price of CHZ down significantly. A couple of weeks ago, the European football authorities announced the renewal of all major competitions throughout June, which also gave the price a second boost that amounted to 20% of positive action. Once the season gets into full swing, there would be an enormous increase in usage and demand for those tokens as well as Chiliz because the developers have already rolled out the proprietary exchange platform specifically for the sports-based tokens that can be traded against CHZ.

Chiliz is also looking good from the standpoint of technical analysis. Although the price has just bumped into a tough resistance level at $0.018, which comes as a convergence between the historical resistance and the 0.5 level on Fibo, it appears to have enough bullish power to claim it and retest if necessary. The buying volume is prevailing, plus the last upswing flashed the three white soldiers pattern, which could play out later. Lastly, MACD remains firmly in the bullish zone, far from being overbought; it has also made a bullish crossover on the daily time frame. Taking all that into account, we predict that CHZ will crack the level at $0.0108 and even brush $0.013 before going into a retracement.