Chiliz (CHZ) is a relatively new cryptocurrency that got listed on the major cryptocurrency exchanges a little bit over six months ago, on July 1, 2019. At the time of its emergence, the coin was traded at a price of $0.0164, which is higher than its current price of $0.007 (as of the time of writing) by 58%. The crypto was immediately spotted and listed by one of the biggest trading platforms, Binance that now hosts half of the coin's average trading volume, which amounts to $2 - $2.2 million per day. 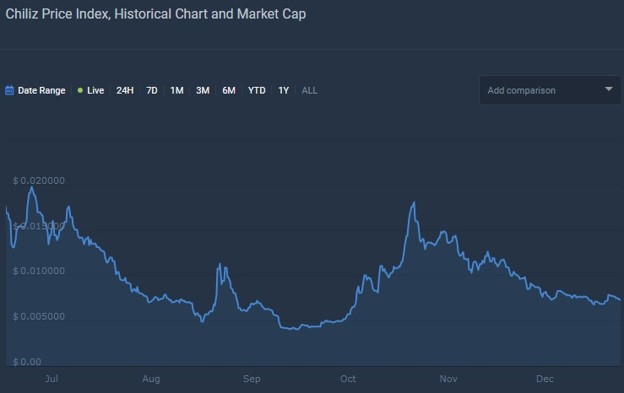 CHZ has taken a somewhat prominent position in the global ranking, as for the new cryptocurrency, which is only 15 steps below the Top 100 on Coinmarketcap. The market capitalization of Chiliz now stands at $26 million, having decreased from its record levels of $66,4 million, acquired in November when the price of CHZ was at its peak.

Fundamentals: a coin for football fans

Although the initial period of Chiliz's entrance to the crypto scene can't be dubbed as overwhelming, it's not the price action that requires immediate attention, but the fundamentals. The reason is that CHZ is arguably the first cryptocurrency that was developed specifically for the sports industry, which is characterized by the outstandingly high capitalization and the global fan base that accounts for billions of people.