In our last CHZ price prediction article, we anticipated the price to breakout from the symmetrical triangle after going past the price level at $0.014. Since that publication, it took the sports token only seven days to consolidate and then perform the predicted breakout that started a short but sweet 110% bull rally that lasted for 22 days. 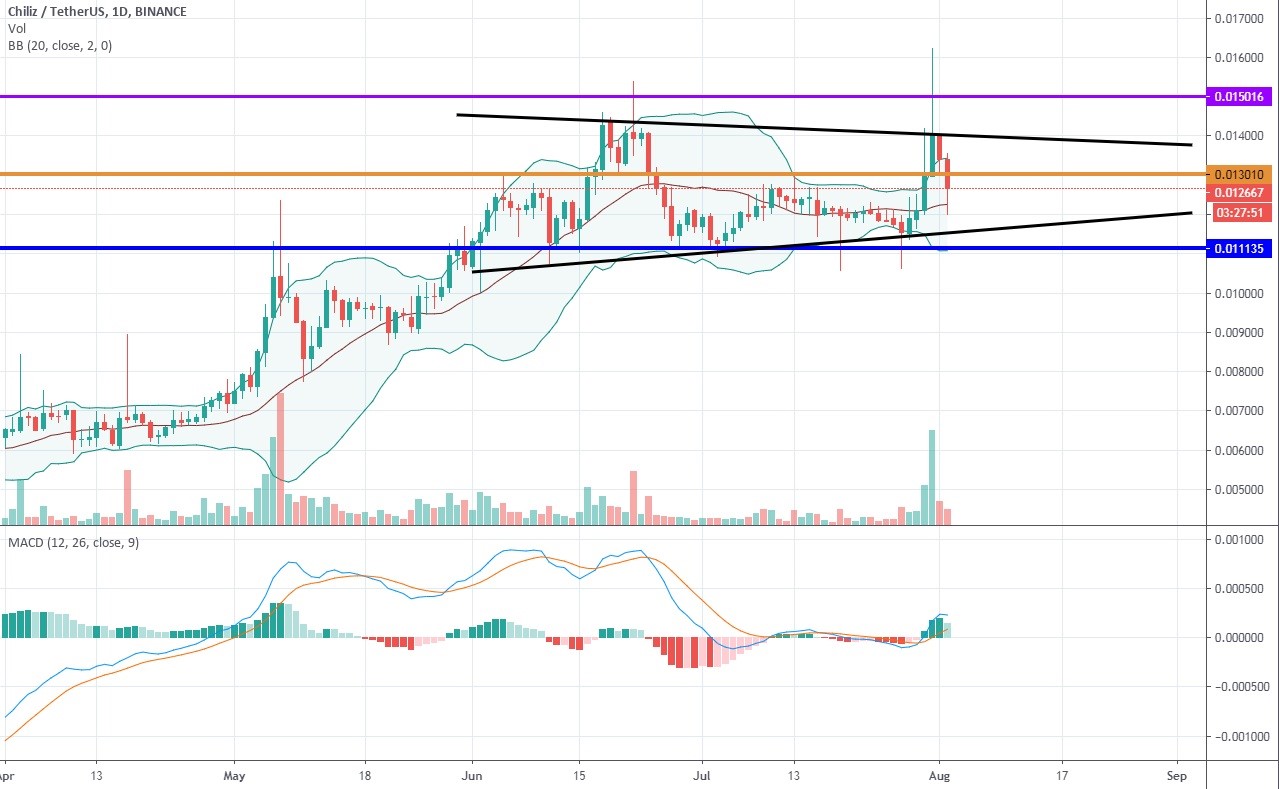 CHZ chart before the breakout 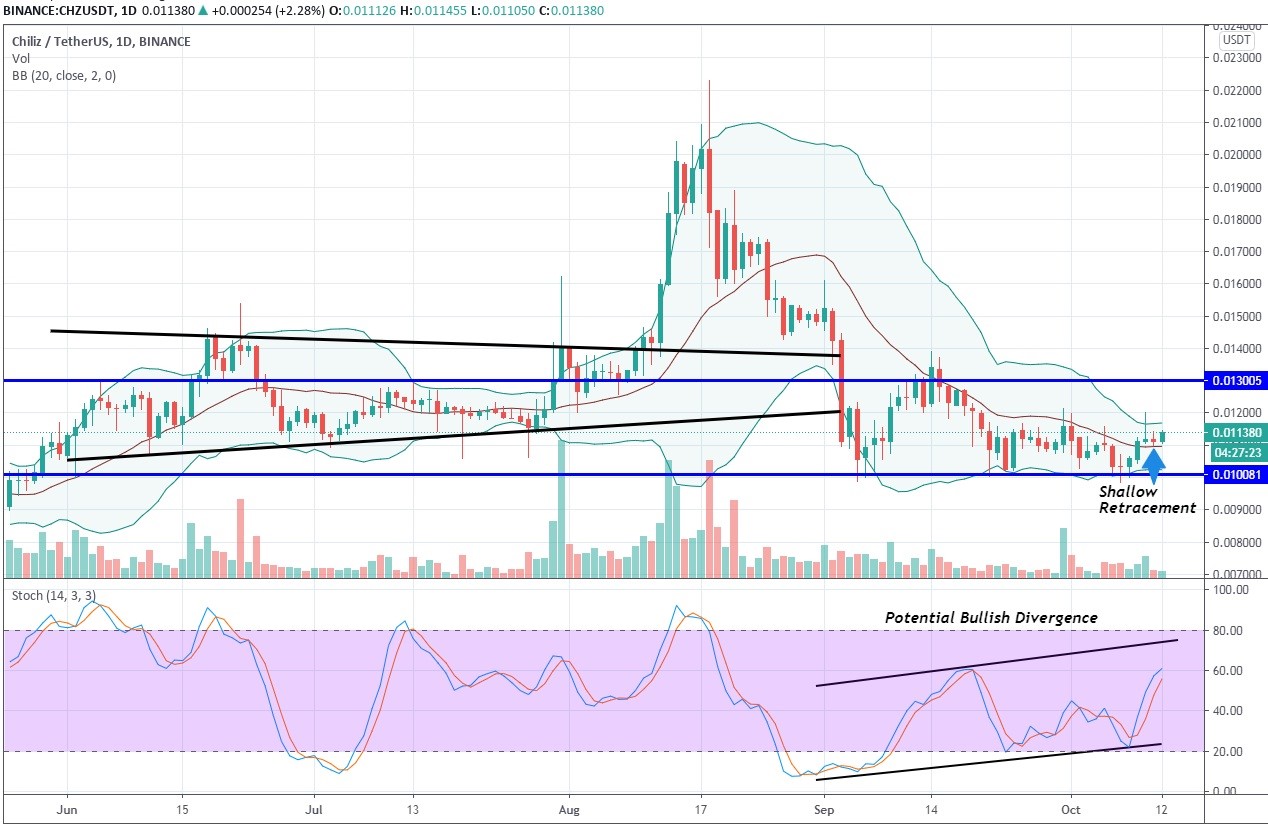 The rally ended with Chiliz reaching the all-time high at $0.022 on August 18 and then capitulating all the way to $0.0098 is two successive dumps with shallow retracements. However, the landslide had stopped at that particular price level, which now acts as multi-week support and the area from which Chiliz can potentially launch another bull rally before the end of the year.

As of this writing, CHZ is priced at $0.0113, established after a tiny 0.78% price increase in the past 24 hours, which places the price 52% away from the new ATH. The previous month wasn’t particularly fruitful for the altcoin that powers the Socios.com blockchain platform as it went red against USD by 9.66% - the same applies to BTC (-19%) and ETH (-13.4%). But Chiliz’s performance on the yearly scale remains positive as its gains against USD amount to 129%; it also went up by 65.6% in the Bitcoin market but managed to get only a small 8.7% advantage over Ethereum. 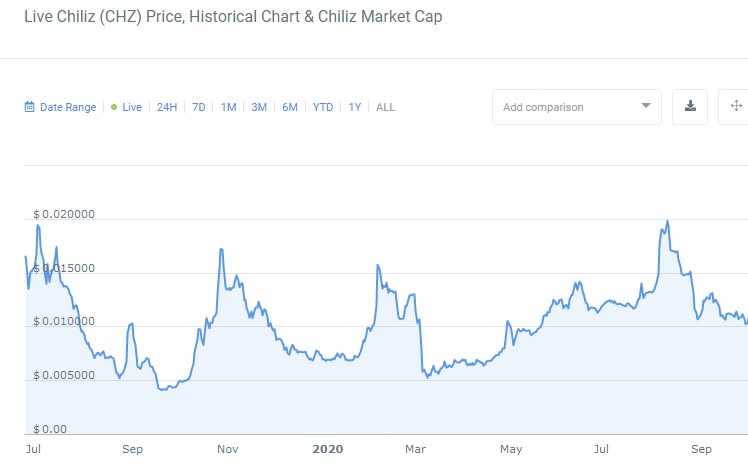 The historical chart clearly shows that Chiliz is trying to make a full-fledged reversal after the March lows, but the September selloff came at a bad time as CHZ had just begun making an upswing. Now, with the uptrend structure being disrupted, the buyers need to hold the price near the support at $0.01; otherwise, the correction will take CHZ much deeper, possibly even to $0.007.

Chiliz is in for consolidation or breakout

The daily chart makes it apparent that CHZ has found a comfortable support level at $0.01 as the price has tested it multiple times without falling under. In addition, the middle line of Bollinger Bands (BB) has begun to straighten out after sloping down considerably in the midst of the correction, which usually signals about the beginning of consolidation. Notice that the market participants have taken the price action above the said middle line for the first time since August 24. The BBs are also forming a tighter squeeze, so the price will either go into an even narrower range (presumably the one between $0.0146 and $0.017) or experience a spike of volatility. Given the shallowness of the last retracement to $0.0109, we expect the resolution of the BB squeeze to be to the upside, potentially a 15% rally to the upper line of a wider consolidation channel ($0.01 - $0.013).

This move is supported by the increasing buying volume in the last five days, as well as the potential bullish divergence on Stochastic. However, in order for the divergence to finalize itself, the indicator must travel to 76 or higher. The next week’s price action will determine whether Chiliz is ready for the breakout above $0.013.