As many probably know, Chainlink (LINK) is a decentralized crypto project, an oracle service, which has a goal of connecting blockchain-based smart contracts with real-world data. The project was seen by many as one with a great amount of potential. However, its use cases aside, many are also interested in what to expect from its price.

At the time of writing, the project's price sits at $2.31, after growing by 3.63% against the USD, and by 4.20% against BTC in the last 24 hours. Meanwhile, its market cap sits at $810 million, which puts it at the 16th spot on the list of largest cryptocurrencies by market cap.

But, where will LINK go from here? To determine that, let's take a look at how it performed during its relatively short lifetime.

As mentioned, Chainlink is a relatively young coin, only being launched a little over two years ago, in mid-September 2017. Despite the fact that the coin saw the launch in time to get caught up in the upcoming bull run that took BTC to $20,000, the coin did not grow nearly as much as others.

Its price did react slightly to the surge, and it even reached its ATH (for a time, at least). But, the growth from $0.16 to $1.30 was not that impressive, especially when compared to what the coin achieved in 2019. However, we'll get to that soon.

After the surge and crash in 2018, LINK's price returned to its bottom at $0.2, with a few small attempts to grow in the meantime. In fact, the price was surprisingly stable in 2018, and even the market crash in November 2018 only brought it back to the bottom after a brief attempt to grow, instead of forcing it to break all supports and sink deeper, like all other coins did.

LINK seemingly found its true bottom, and it never went below it. However, it did not stay there, either. As soon as the November 2018 market crash had blown past, the coin started slowly growing. The growth was very slow and discreet, but also constant, and it took the coin from $0.20 to $0.57 in around 5 months. 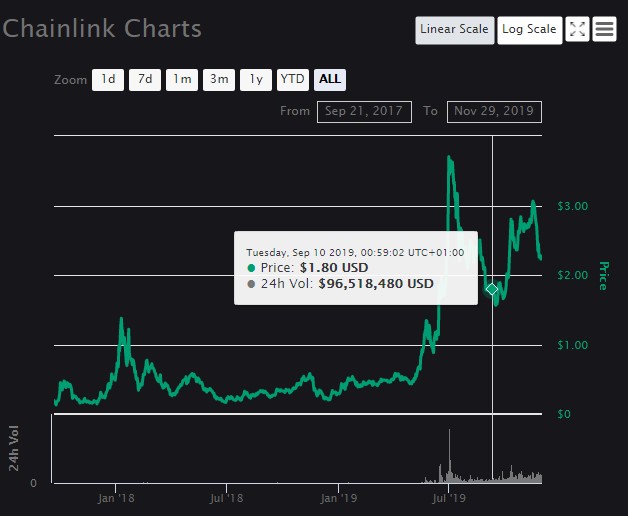 Then came April 2019, when Bitcoin itself surged, and Chainlink was ready to follow. The coin skyrocketed from $0.5 to $3.59, surging higher than ever before, outgrowing its old ATH by three times in only two months. Even after the surge had ended and correction took place, LINK's drop kept it above its ATH from 2017/2018, and the lowest that LINK has dropped since April 1st was $1.58, which happened on September 14th.

After that, the coin surged once more to $3, reaching this resistance only a few days ago, on November 17th. This surge was followed by another drop that did not even reach $2, when the coin once again started to recover, which leads us to its current price of $2.31.

Where will LINK go next?

Chainlink appears to have a strong desire to grow, as it used every opportunity to do so since its creation. While it participated in drops whenever the market sentiment forced it to, the coin never missed an opportunity to surge, which is quite remarkable for a cryptocurrency.

On top of that, LINK has some real use cases for real-world data handling. So far, the coin appears to be a sound investment, and it has given us no reason to assume that this will change anytime soon.