Centrality is one of the few cryptocurrencies from the Top 50 that didn’t tread in the steps of the market this year, which engaged in a relatively short bull run in the period between March and August. Instead, the coin took a breather and lurked behind the scenes while other cryptocurrencies, including Bitcoin, were climbing upwards only to plummet by the beginning of the fall.

But those owners of CENNZ who armed themselves with patience were rewarded generously right at the time when other holders of other top coins were watching with moans and groans as their portfolios were shrinking due to the lingering correction.

The following chart shows the comparison between the price action of Centrality and that of Bitcoin and Ethereum over the course of this year, and the achieved gains, percentage-wise. 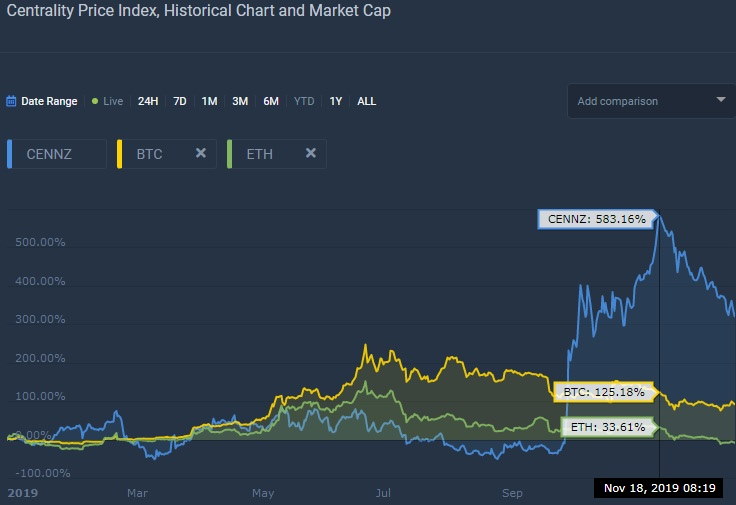 It is clear that CENNZ had outperformed the two powerhouses in terms of overall gains, as it demonstrated a magnificent 583.16% markup at the year-to-date chart, whereas Bitcoin had “only” 248.67% at its prime time in mid-summer, while Ethereum managed to take a boost by 153.3%. 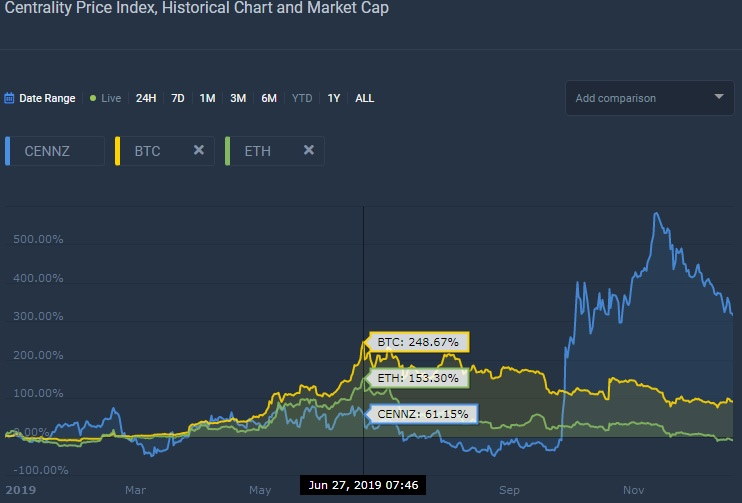 So, those traders who were able to recognize the camouflaged prospects of Centrality and enter a long position at the end of September, when the coin literally had a massive pump that propelled its price to this year’s high of $0.1748, straight from the long-term support level of $0.017, while taking profits with ETH at its peak in summer, could be labeled prime candidates for the Trader of the Year award.

The similar moon trip happened only once before in the history of CENNZ, shortly after its exchange listing. Back then, the price took a sharp dip below $0.2, only to have a similarly strong impulse to the upside, which ended up in CENNZ hitting the all-time high of $0.5. 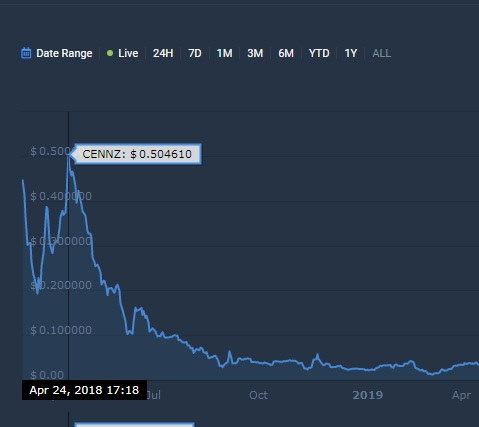 This analysis shows that Centrality has the proclivity to very strong moves to the upside that generate enormous gains for its holders, though they tend to occur quite seldom. Therefore, the price history dictates that holding CENNZ in the trading portfolio can be reasonable (and profitable).

The price expectations for Centrality

Even a nascent trader knows that the market moves in cycles; thus, a price explosion is always followed by a correction, which takes a cryptocurrency to its average-weighted price at a certain period of time. As you could have probably noticed on the charts above, CENNZ had already entered the correction phase as the price has been gradually descending from the yearly high to the interim support level at $0.1.

The question now is whether this coin would entrench at that support or would it keep being pushed down by the bears towards the next theoretical support at $0.05, or even lower. Judging from the diminishing trading volume on most platforms and readings of indicators, CENNZ is likely to experience further devaluation, which could be a massive one.

As you can see, the overwhelming majority of technical indicators are flashing sell, countered only by Stochastic Fast, Chaikin Oscillator, and Williams Percent Range. However, it would be wise to wait and see if CENNZ manages to find the above-mentioned support. Should it break through it, then it could enter into a freefall.