Cardano (ADA) has always been a project that took its time, and it was always much more focused on its technology than on the price of its coins. After all, Cardano dreams bigger than simply being a transactional currency, which puts it in the same category with Ethereum or EOS.

Even so, traders and investors still like to use it for making a profit, and to them —  the issue of Cardano's price is very important. Well, they will be interested to know that ADA is actually growing at the time of writing, by 6.05%, at that.

The current behavior comes as a recovery after a price drop from September 23rd, when the entire crypto market saw major drops. Now, the price seems to be going up for most coins, and Cardano is among those who are gaining the most.

As you may know, Cardano is a relatively young coin, which was only launched in late 2017. Like all others, it reached its ATH almost immediately after that, as 2017 came to a close, and 2018 was starting. In ADA's case, that was on January 4th, when it hit $1.15. A low price when compared to Bitcoin's $20,000, but a big deal for Cardano. Unfortunately,, what happened after that is also the same as with every other coin, and ADA simply did not have enough time to stabilize before the market crashed.

The coin's price kept dropping further and further down, eventually dropping down to its lowest point — $0.029. This was only slightly above the coin's initial price — the one it had immediately after being launched, and before the rally that took it to its ATH.

As mentioned, Cardano followed in the footsteps of many other coins in the past, and it did the same in 2019, although not as precisely as before. Its 2019 YTD chart, shows that the coin did not grow in stages, following a series of price surges that allowed most other cryptos to surge.

Instead, ADA was relatively stable until mid-March, when it started growing rapidly, and without warning. It hit $0.09 in a matter of weeks, after starting from $0.04. It then dropped to a support at $0.06, only to surge again and even breach the resistance at $0.09, multiple times, and reach $0.10. 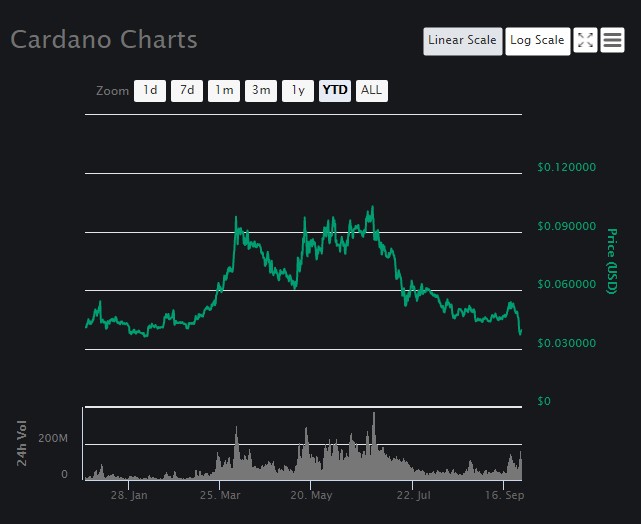 However, as mid-June came, Cardano fell back in line with the rest of the coins, and the price correction that followed brought it back down. ADA was not among the coins such as BTC, which have grown halfway (or more) towards their ATH, and then managed to remain there until a few days ago.

Instead, Cardano grew only a little, and it ended up losing its progress completely, and dropping back to $0,03.

What awaits Cardano in the future?

As stated in the beginning, Cardano is a project that focuses on its tech, and it likes to take its time. It has huge potential to become an even bigger player in the crypto/blockchain industry when its technology reaches its peak. When that happens, chances are that its price will probably grow to demonstrate its usefulness and importance. Until then, the coin is likely to go up and down and follow the general market sentiment.