The crypto market currently still experiences major drops, with major coins losing anywhere between 2% and 10%. Even Cardano (ADA), which is otherwise relatively stable when compared to most other cryptos, currently sees a 6.04% drop in its price.

The coin currently sits at the 14th spot on the list of largest cryptos, with a market cap of $827.43 million, and a price of $0.031914. Many are wondering whether or not ADA might recover from this drop-in days to come, which is what we wanted to explore, as well. First, however, we believe that it is worth taking a look at the coin's past and analyzing it for clues as to what its future might hold.

Cardano was launched back in early October 2017, just before the crypto price surge that is still one of the most important events in crypto history to this day.

When it emerged, the coin had a price of around $0.025. However, in less than two months, it started surging alongside the rest of the market, eventually reaching its ATH at $1.10 in early January 2018. Like every other cryptocurrency, it soon dropped from those heights and it sank all the way down to $0.17, before joining another, smaller surge in April 2018.

This time, ADA did not go as far as some other cryptos, such as EOS, which exceeded its January high during this second surge. Cardano only climbed up from $0.17 to $0.35 before the bear market returned, and the crypto winter continued.

From that point on, Cardano was in a constant, but steady, drop which only ended around December 20th, 2018. When 2019 came around, ADA actually spent the first few months of the year relatively stable. It did see some fluctuations, mostly between $0.4 and $0.5, but it usually remained within those two levels. Then, in mid-March, the coin started to surge, and it reached its highest point in 2019 only two days after BTC started growing. 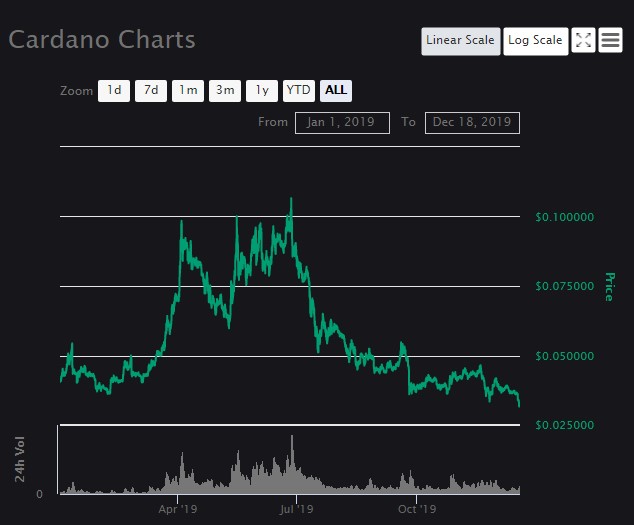 This was when Cardano hit $0.1, which is the level that instantly rejected its price and forced it to drop to $0.59. However, Cardano soon returned and attempted to breach the resistance at least four more times. It did not follow Bitcoin's lead, but it did enjoy the strong market, which allowed the coin to make multiple attempts at its strongest resistance without crashing too deep.

Unfortunately, when Bitcoin crashed and led the market back down, Cardano was forced to follow. The coin crashed to $0.05 very quickly, and it struggled to remain above this level for several weeks. When the support finally gave in, ADA also spent several more weeks trying to breach it and grow back up. Then, in late September, it finally gave up and dropped to $0.04. It spent two months around this level, going above it and below it, but never going too far from it.

At least, until now. In late November and the entire December, ADA was below this level, and it is currently approaching its next big support at $0.03.

Where will Cardano go next?

Cardano is a project with a lot of potential. The project is well-known for the fact that it doesn't rush things, especially when it comes to its own development. Its developers have been taking their time, ensuring that each new update is in perfect condition before applying it.

In a few years, Cardano might be one of the strongest projects in the crypto industry, provided that it survives that long. As such, many view it as a good long-term investment.

As for its price in the short term, Cardano has shown that it does not exactly follow Bitcoin's lead. There are many coins whose performance directly mirrors that of BTC, and almost every spike or drop on the chart is the same with BTC.

This is not the case with ADA. ADA seems to follow its own path, although its performance is often conditioned by the market sentiment. In other words, ADA is likely to grow when investors are optimistic, even if Bitcoin has not led the surge yet. However, when the market trades in the red, ADA cannot go against such a powerful trend on its own.

This independence from BTC is a good thing for any cryptocurrency, as it shows initiative. However, there is no doubt that BTC is the most dominant coin in the industry, and when it decides to drag the market down, Cardano will have to obey, as we can see right now. Still, as soon as the market stabilizes, ADA might try to regain what it lost, and at least return to $0.4 or even $0.5, which might happen in 2020. And, if BTC happens to lead another bull run, Cardano is more than likely to follow.