Bytom (BTM) - the 70th cryptocurrency with the market capitalization of $120 million - stayed true to itself in terms of rapid price action. Those who follow our BTM price prediction know that we consider this altcoin the “swing trader’s dream” because, as shown on the yearly chart below, its price action is characterized by enormous upswings and almost equally deep troughs. 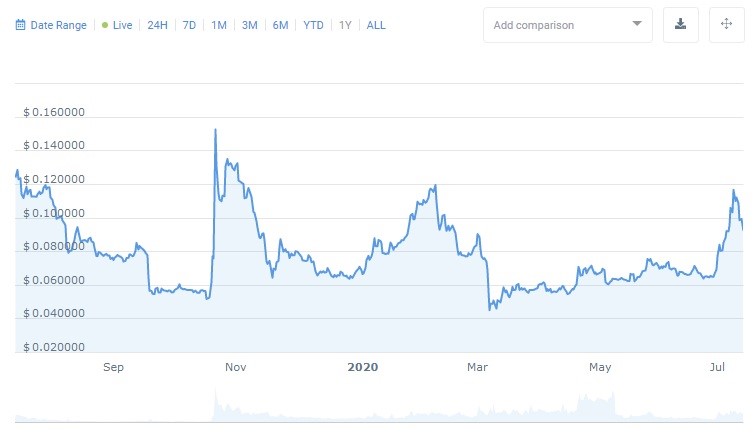 Therefore, we see no point in analyzing Bytom’s profile of gains/losses since the coin is very volatile and could move up and down a few dozen percent in a span of a quarter. For that same reason, BTN is definitely a market worth following, especially at times when Bitcoin is tediously ranging, as if affords plenty of opportunities for profit-making in both USDT and BTC markets.

Bytom is retracing after another powerful upswing

Despite being labeled the upswing king, Bytom is trapped in the perpetual downtrend ever since the burst of the crypto bubble in 2018, which is depicted on the all-time chart below. 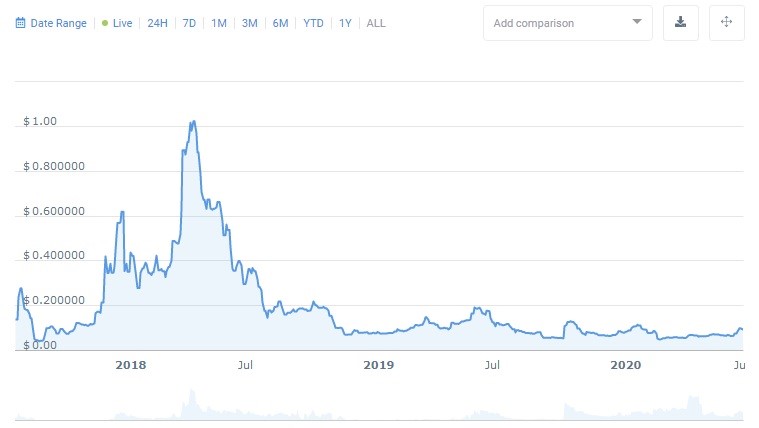 The price did hit the historical low at $0,31 during the March crisis, but so far has displayed no positive signs of downtrend reversal. We used the weekly time frame to determine the most important areas of price interaction. 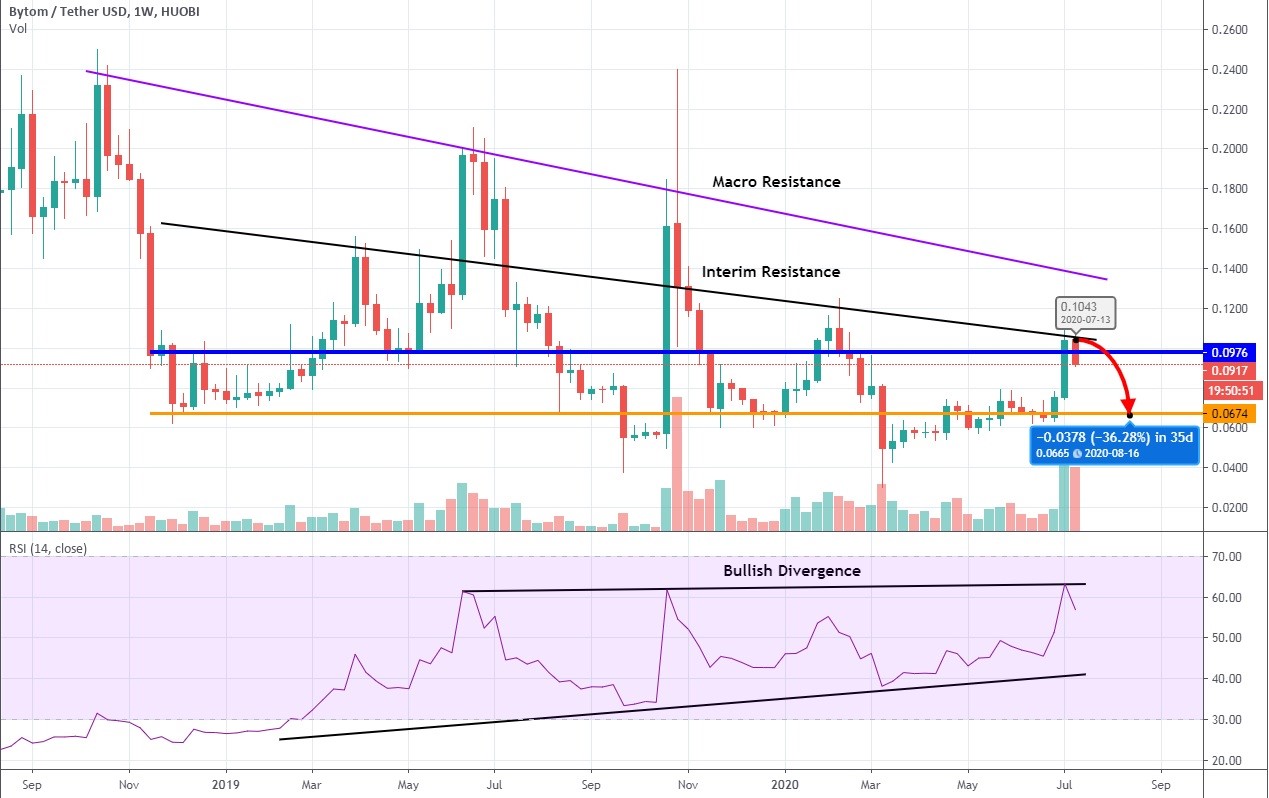 The level at $0.97 serves as a magnetic point for Bytom as the price is constantly being dragged to it, even after huge upswings that tested the macro resistance. This time around, BNT got rejected at the interim resistance after another impressive 67% spike, and the current bearish weekly candle is likely to close below $0.92, which signals about the commencing retracement that usually amounts to 35% (average percentage, calculated from the last three retracements). On the basis of this assumption, as well as the fact that the Bytom retracement usually lasts for 35 days, we predict that Bytom will slide down to $0.674 by the tail end of August.

The volume analysis confirms that the bullish impulse is dying down since we see the decrease of the overall volume and the prevalence of selling activity, which always precedes the fully-fledged retracement.

Moreover, the 14-period RSI reflected the price behavior after the rejection, although we ought to notice a huge bullish divergence that has been more than a year in the making. Therefore, we can’t disregard the possibility of a multi-month position acquisition by large players that could result in the trip past macro resistance in the 4th quarter, but that would depend on multiple factors, such as the behavior of Bitcoin.

An opportunity for shorting against BTC

Speaking of the Bitcoin market, Bytom has been doing well there. In fact, the altcoin has put up the largest upswing of the year - 83% in just 11 days. 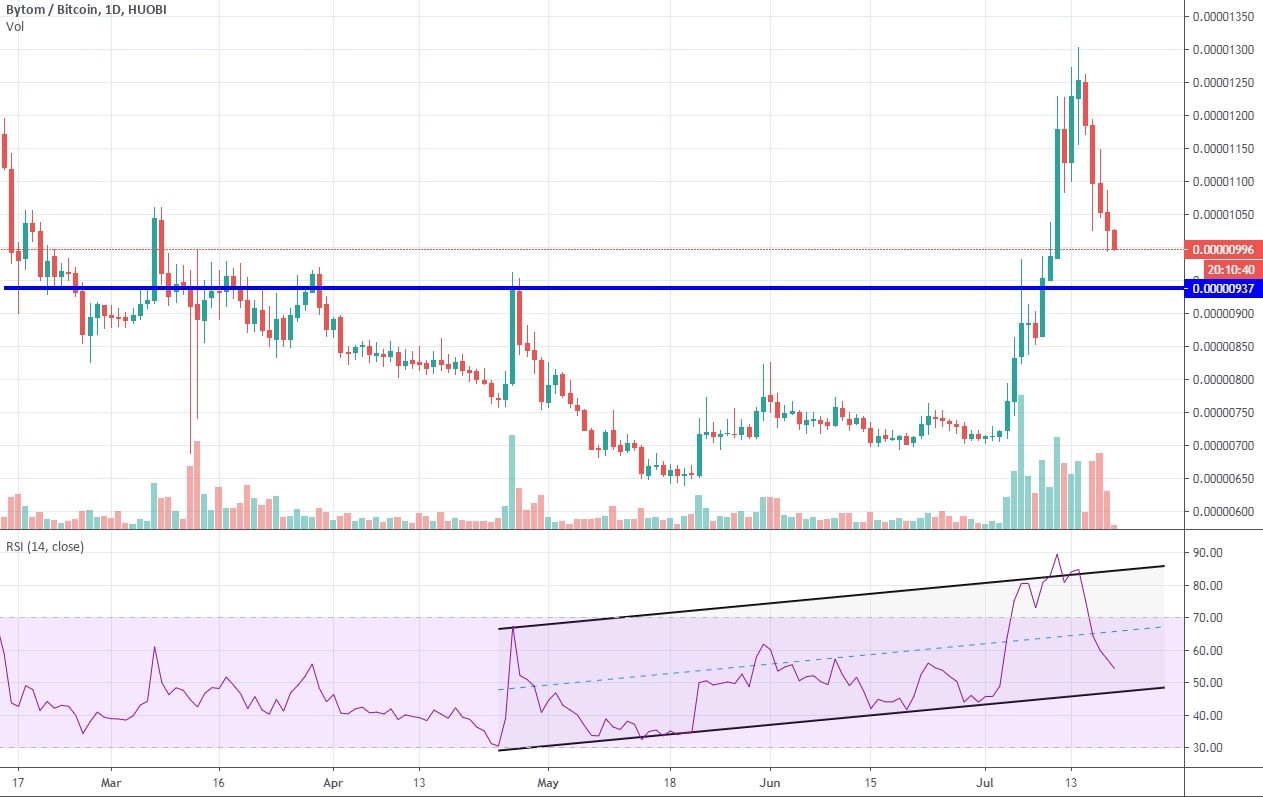 But after reaching the peak at 1,250 satoshis, BTM went into a steep correction that is likely to drag the price down to 937 sats, the point of intense price interaction. Notice how well the divergence on the 14-period RSI had played out in this situation. The indicator should reverse at 48 that will coincide with the bulls’ reaction at 937 sats. The price action still leaves a chance for a quick short trader with entry at 995 sats and exit near the support.