Since the inception of the bear market in 2018, Bytom (BTM) hasn’t been much of a performer as its all-time ROI went down to -47% after the recent two dumps in September and October. Even the DeFi frenzy, and the latest resurgence of Bitcoin (BTC), weren’t much of a help in terms of pushing the price to some new heights. 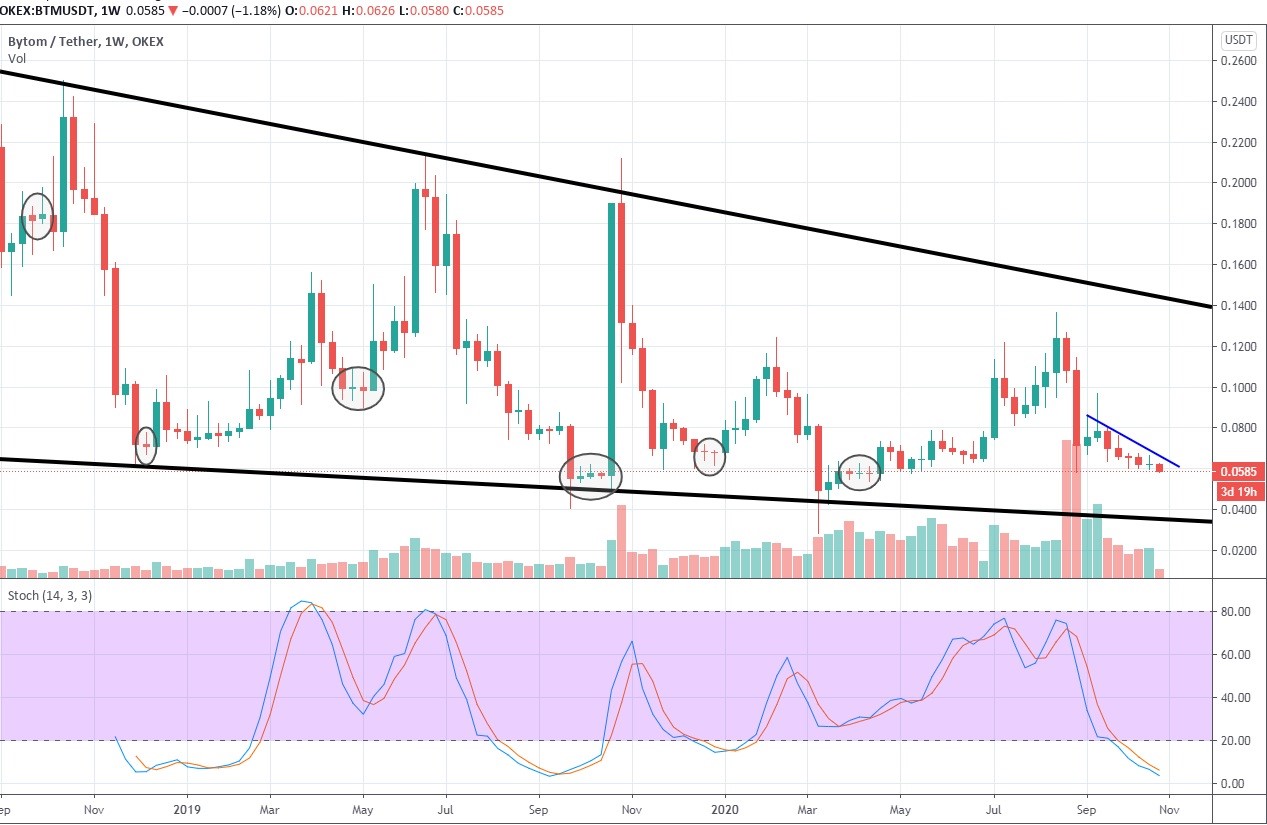 The buyers do organize rallies from time to time, but their efforts weren’t sufficient enough to push the price out of a seemingly perpetual downtrend, with the last lower low on the macro time frame (weekly chart) being at $0.0312, which is also the all-time low. Not surprisingly, Bytom’s performance profile, which covers the past year, is colored red:

The weekly chart above demonstrates the BTM is undergoing tough correction after the summer bull rally that had run its course in the last week of August. As of this writing, Bytom’s price stands at $0.058, following the 7% drop in a week (USD) and 10% (BTC). It sits at the 103rd spot in global ranks with a market capitalization of $81.3 million, having dropped from $97.5 million since the beginning of the month.

So, why bother with this backwater altcoin, one might ask? The thing is that over the past two years, Bytom has shown a proclivity to some very explosive price action to the upside that was nearly always preceded by either a double or a triple spinning top (doji) pattern on the weekly chart during the period of consolidation or at the bottom of the correction. And when this pattern plays out, a spike to the upside could be truly enormous, like the one that occurred last October when the coin gained 332% in just seven days.

Surely, BTM doesn’t always pump as hard as then, but the gains are substantial, enough to consider this altcoin for a swing trade with a good risk/reward ratio, because when Bytom engages in a rally, it rarely retraces more than 20% - 25%, whereas its gains constantly amount to triple digits. Besides, as you can see, the trip to the upside regularly commences with the same candlestick pattern, thus making it super easy for a swing trader to pick an entry point.

Obviously, now isn’t the best time to enter this market because the sellers are visibly pressurizing the price to the downside, with each weekly candle opening below the previous one. There is a distinct possibility of bears dropping BTM by another 30%, even 40%, to the macro support line at $0.0351, but the position of Stochastic, which has almost reached the bottom of the oversold area, hints at the approaching reversal, possibly somewhere near $0.047 - $0.05. But it’s most likely that Stochastic will stay in the oversold zone for some time while Bytom makes its way to the interim bottom and then consolidates there for two or three weeks, with consolidation taking the shape of two/three spinning tops or dojis, appearing in succession.