Bytom (BTM) is not the kind of cryptocurrency that often appears in the news feed or even on traders’ radars for that matter. The reason being that BTM is placed outside the top 50 - the coin currently occupies the 55th position - and it traded mostly on the mid-sized cryptocurrency exchanges like OKEx, Bibox, and CoinEx. The only exception being Huobi Global, a popular platform that is currently ranked 4th by liquidity.

However, the fact that Bytom hasn’t been associated with any hype and isn’t listed on the majority of popular cryptocurrency exchange platforms doesn’t mean that this coin isn’t worthy of trading and doesn’t carry any fundamental value. In fact, its current trading volume of $22,1 million per day is higher than that of its direct neighbor in the ranking table: Enjin Coin ($13 million), which enjoys some traction among traders.

The fundamental value of Bytom

The project behind BTM is engaged in the development of the commercial platform on the foundation of the Bytom blockchain, various payment solutions for merchants and e-commerce,  as well as the protocol that allows for the seamless tokenization of real-world assets.

The concept that Bytom tries to realize is certainly not new or unique - there are many crypto projects that work in the same direction - but this team appears to be among the most efficient and productive since it has already created a broad ecosystem that includes digital wallets, block producers, and the Vapor sidechain system.

Therefore, traders who rely on fundamental analysis in their line of work should definitely look into Bytom because of its prospective ecosystem and the continually growing partnership chain.

The year 2019 has been reasonably good for Bytom as the coin gained 42% against the US Dollar - not the most impressive performance, but, certainly, a sign that BTM is more than capable of generating profits.

The 55th coin had gone through all phases of last year’s minor uptrend, having reached the yearly high at $0.2 and then corrected to $0.06. 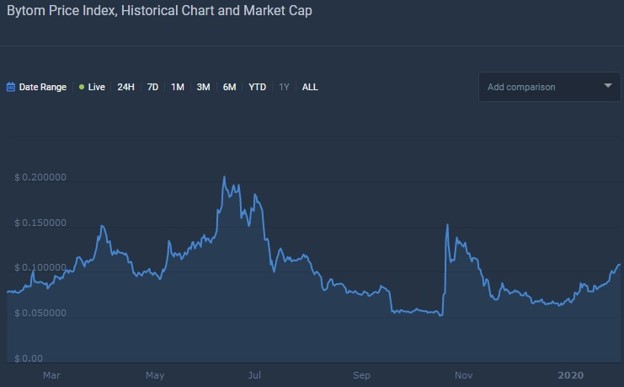 Traders should take notice that Bytom is prone to rapid price spikes, whereas its correction phases seem to be relatively mild and smooth, as much as it’s possible with cryptocurrencies. However, they could also be steep at times, like the one that happened right before the market reversal, as seen on this daily chart. 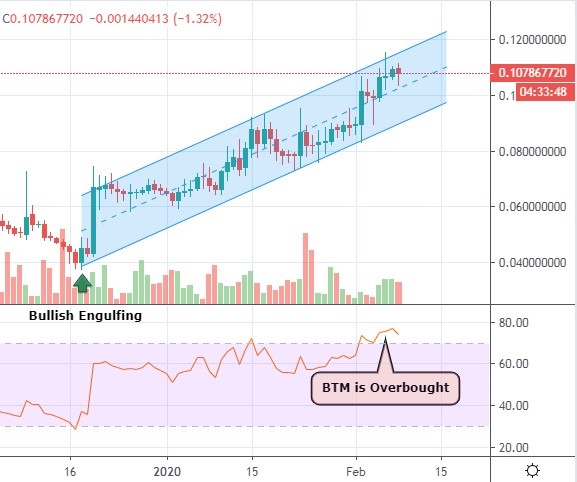 Unlike the previous mighty upward impulse, which lasted between the end of October - beginning on November, 2019, when the price pulled back to the previous level in just three weeks, the current nascent uptrend, which began with the bullish engulfing pattern, appears to be developing more gradually as it moves within a perfect ascending channel. The price move is accompanied by not particularly heavy yet substantial trading volume.

Notice how a huge selling volume right in the middle of the uptrend line generated measly bearish candles, which means that the bulls are currently controlling this market. The fact that the RSI is presently in the overbought zone points at a looming retracement, but it shouldn’t push the price below $0.093 - a next higher low. However, there is a very strong resistance at $1.2 ahead of Bytom, which could stop the coin in its track for at least a week.