Binance Coin has just broken one of its largest resistance levels, and while it still remains to be seen whether or not this will be permanent, the coin still remains one of the best performers of the year.

While the coin's price seems pretty good when compared to the start of the year, it is still only half of its highest point in 2019 — which is also its all-time high (ATH).

As many already know, BNB was launched by Binance — one of the world's largest cryptocurrency exchanges — back in July 2017. The coin's launch came shortly after the exchange itself started working, so it wasn't very popular or well-known at the time. It was just another new altcoin, launched by just another new exchange.

Even when the crypto prices peaked at the end of the year, BNB did not follow right away. In fact, it grew with the second group of altcoins, which reached their ATHs in January 2018, rather than in December 2017.

At the time, this was Binance Coin's ATH, although its value was only a dollar or two higher than it is right now. Like all other altcoins, BNB crashed immediately after that. However, while most other coins kept sinking lower and lower throughout the year, BNB actually grew as months went by. Its initial crash was stopped at $10, meaning that the coin only lost about 50% or its price, or maybe a bit more. However, as mentioned, it started growing after that, reaching around $16.5 by June 21st.

This growth is explained by Binance's growth in popularity. The exchange kept listing new coins, announcing new plans for the future, and more. As a result, it started seeing more users, more activity, and more usage for its native cryptocurrency.

However, over the summer of 2018, the hype started to lose its momentum, and BNB started to drop as well. In mid-August, BNB was back at $10, and after the second market crash in November, which was caused by BCH hard fork and hash wars that followed, BNB broke this support and dropped down to $5.5.

It ended the year only slightly above this price, entering 2019 with a value of $6.

Things started changing drastically for the coin as soon as 2019 had started. BNB started surging almost immediately, months before Bitcoin started leading the market up in an entire series of small bull runs.

BNB's newly-found popularity once again came due to Binance's efforts. The exchange started launching fiat-to-crypto subsidiaries around the world, and it brought back its Binance Launchpad, a token-launching platform that created the IEO token sale model, which only used BNB for the purchase of new tokens. 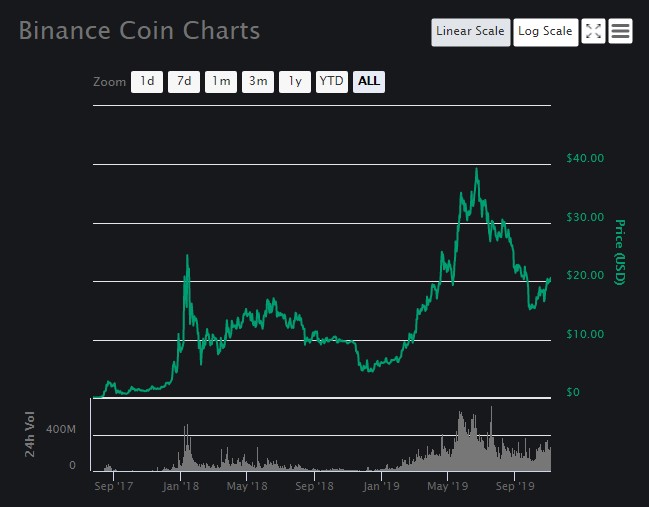 As months went on, BNB climbed to its new ATH of $40, reaching this peak around June 22nd. After that, however, the market started crashing once more in a correction that followed a sudden series of surges. While BNB did not wait for BTC when it started climbing up, it did follow it in its price drop, eventually reaching a bottom at $16 on October 1st. However, throughout October, BNB started climbing up once again, and it currently once more sits above $20.

What will happen to BNB in the future?

The question of where will BNB go from here does not have a definitive answer. The coin has quite a few use cases within Binance's ecosystem, and with the exchange still being one of the best ones among crypto traders, its popularity is unlikely to disappear anytime soon.

However, the fact is that BNB does not have much use outside of Binance's network, which ties its fate to the exchange's own popularity and performance. For now, at least, Binance seems to be doing rather well, and it has been expanding throughout the year. Even BNB itself shows potential and desire to grow, meaning that it is likely to use any opportunity that comes its way.