Blockstack (STX): Bullish Expectations Ahead of the Mainnet Launch

Traders who develop their strategies not only on the basis of price action but also on the fundamental showings of a coin should check out the one called Blockstack (STX) that appears to be gearing up for some major upside moves in the second quarter of 2020.

The fundamental value of Blockstack

Blockstack belongs to the class of cryptocurrencies that has a profound computer science at its core. Perhaps STX has the largest similarity with Cardano (ADA) in that regard, as the team prioritizes the intellectual value of their product to drive the price of STX, instead of resorting to the hype born out of marketing tricks. The team that built Blockstack from the ground up strives to create a decentralized computing network for the third generation of the Internet, as well as the proprietary ecosystem for building dApps. By virtue of decentralized applications developed on that platform, Blockstack aspires to give users full control of their online data and digital identity.

Blockstack has an extensive list of tasks that its team will try to fulfill in 2020, with the most important of them being the launch of Stacks 2.0 mainnet that will feature the Proof-of-Transfer (PoX) mining algorithm. The event due to occur in June or July, the exact date hasn’t been set yet. It is customary for the mainnet launch to be an enormous driver for the price of the corresponding cryptocurrency - that is why we expect STX to be one of the most prominent gainers of this summer. In addition to that event, Blockstack is said to be conducting the second round of token offering through which the company plans to raise around $28 million to fund further ecosystem improvements. Therefore, STX is sure worth having on the shortlist of potential profit-makers.

In preparation for an uptrend ahead of the mainnet launch

STX is a relatively young cryptocurrency that was listed on the exchange platforms in October 2019, although its debut was a flop as the price of the coin had capitulated almost immediately from the all-time high at $0.33 all the way below $0.1.

The March crash took STX to the all-time low at $0.045 from which the price has bottomed out and initiated a slow but steady hike to the upside, over the course of which the price traveled back above the crucial moving averages, passed the first critical resistance level at $0.116, and now has an open battle with the bears at $0.152, a strong resistance line that converges with the 0.681 Fibonacci retracement level. 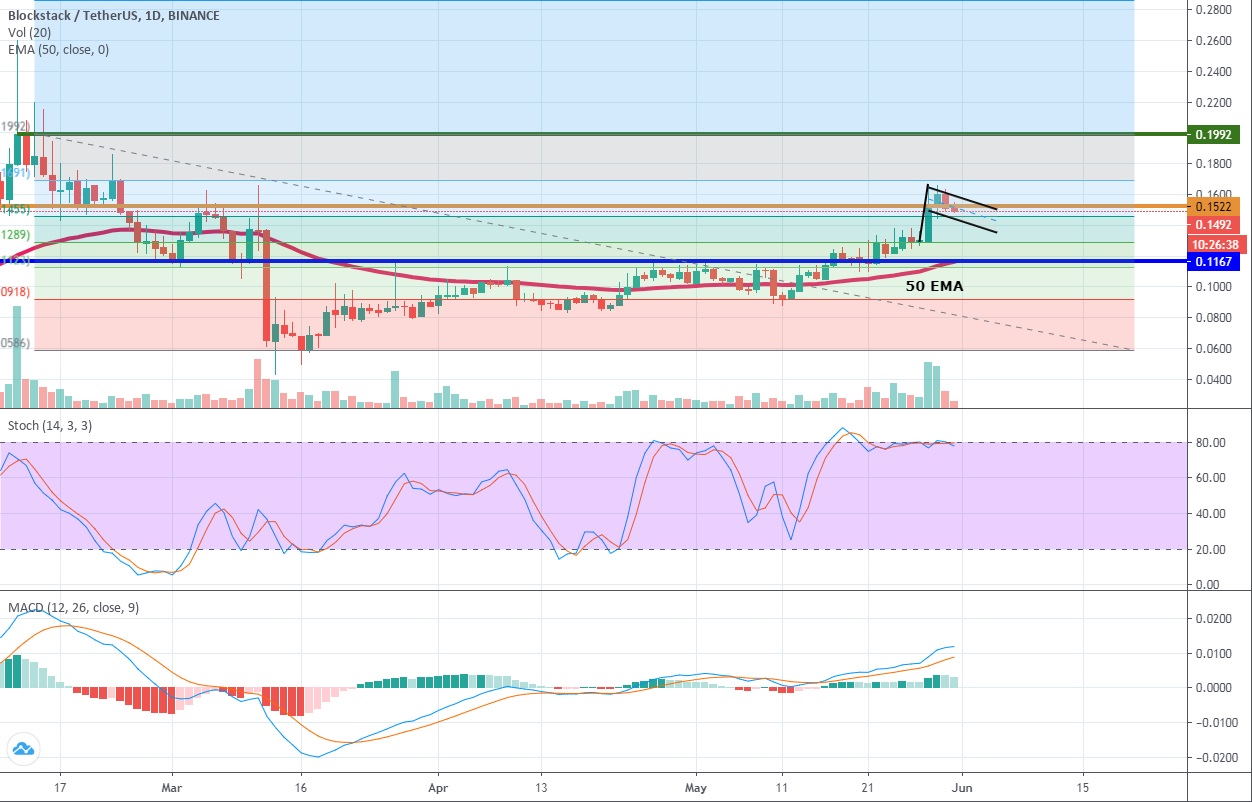 Apparently, Blockstack couldn’t take out that resistance in one go and began forming a bullish flag that is likely to signify the continuation of the existing trend. The high probability of trend continuation is also supported by the position of key moving averages and the volume profile, which shows that the buying volume has been prevalent over the past few weeks. The 14-period RSI is gliding at the edge of the overbought area without crossing it, which leaves enough room for another 15% to 30% move to the upside, right towards the local high at 0.199. MACD is also bullish and offers even more space for the buying action in the coming month before the mainnet launch.