BitShares (BTS) Is Up to Something Bullish

While Bitcoin remains subjected to the uncertainty, being locked up in the range between $8,800 and $9,800, traders could devote some time to monitoring the altcoin markets in search of a coin that could provide an opportunity for a quick and, hopefully, profitable play. If you want a hint, one of such markets would be BitShares (BTS) because the price action there signals about the probability of a large, potentially 30% move to the upside. The move will occur in stages, and once the buyers and sellers reach the consensus is to hold above the resistance line at $0.0241.

The fundamental upgrade might give BTS an extra push

Let’s have a quick recap of what BTS actually represents. BitShares is a P2P network that grants its users access to bitAssets, the value of which is tied to the real-work market. The project was co-founded by Dan Larimer, a well-regarded crypto entrepreneur, who stood at the foundation of Steemit and EOS. BitShares is also a native cryptocurrency of the proprietary decentralized exchange.

But the thing that will surely kindle traders’ interest is the launch of the BitShares 4.0 tesnet, which took place on June 5. Since May 22, the price of BTS has received a couple of 30% bumps, the first of which was fueled by the expectations around the upcoming testnet launch, whereas the second one had instigated the bullish charge that allowed the price to break above the resistance at $0.0241. 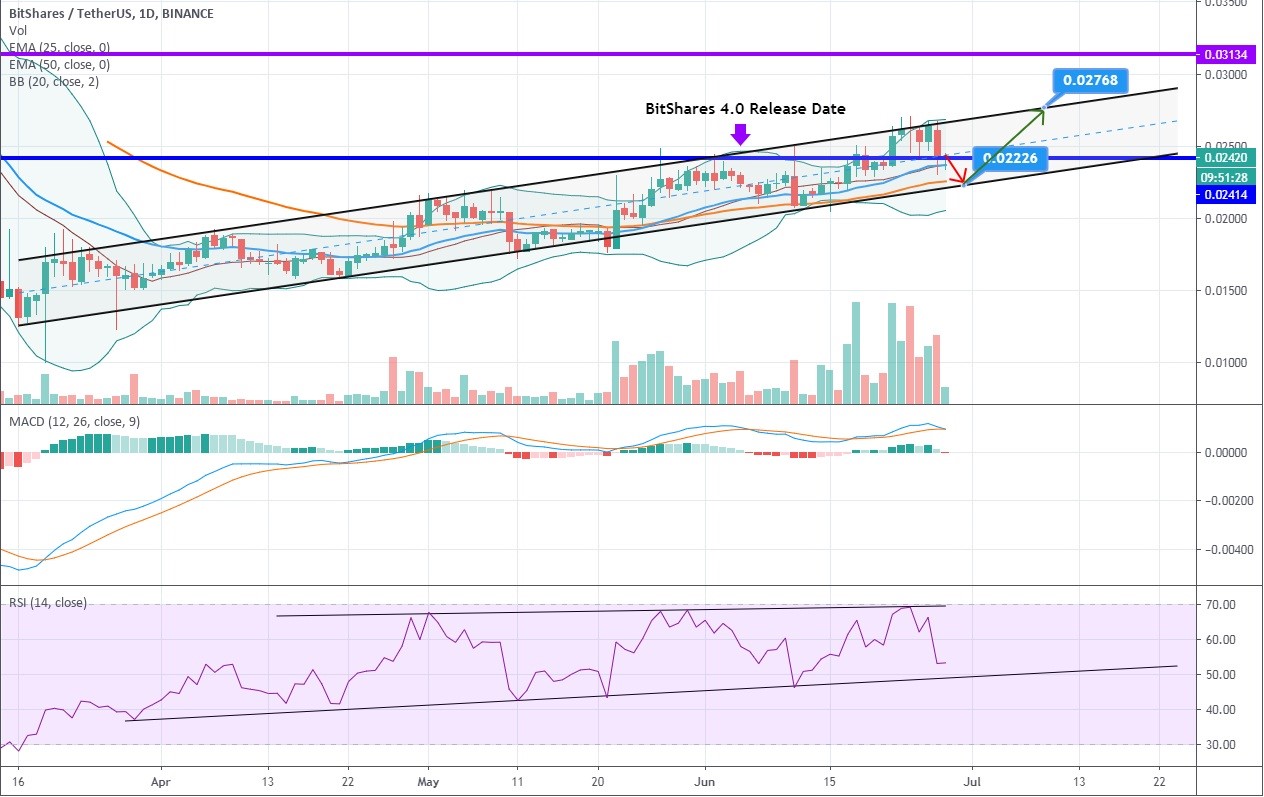 Right now, it is very important to watch how the price will behave during the next three days. BTS must remain above the 50-period EMA that had proven itself as a reliable support ever since May when the price made its way above the moving average. It is important to note that BitShares has had a very channel-obedient price action during the current cycle. So much so, that even the news about BitShares 4.0 didn’t let the price leave its boundaries. Therefore, we base our BitShares price prediction on the notion that the price action will continue to flow within the channel until it establishes a strong foothold above $0.0241.

At the moment, it appears that the bulls have enough strength to counteract the downward pressure on the price, applied by the bears. BTS has successfully tested the resistance three times by now, but this day’s candle signals about the potential move below resistance, the execution of which would force traders to delay the moment of market entry.

To summarize, we predict that BitShares will have a short pullback to the 50 EMA and the channel support line. $0.022 could be a good entry point for a long play, with the price target being set at $0.27, the top of the next upswing.