For the last 11 years, Bitcoin price has been dominating the cryptocurrency space and leading the market trends, whether they were bullish or bearish. To this day, this situation did not change, and BTC still remains the most dominant coin that is showing the way for every other cryptocurrency.

With that said, Bitcoin's price has been on quite a rollercoaster in 2019. Its extreme instability this year caused the entire market to go up and down. Now, as the end of the year approaches, many are wondering what to expect from BTC, which is what we will try to predict today.

Before we do, however, let's take a look at the coin's recent past.

Most people who know about Bitcoin today learned about it at some point in the last two years. This was when the coin gained the most exposure due to some extreme behaviors.

The crypto market was in bad shape by the time 2019 had arrived, which is hardly surprising. However, this year seemingly brought a period of relief, even though it started somewhat slow.

As 2019 kicked off, BTC price finally stopped falling, and the coin found some stability. Its price was very slightly above its bottom thanks to a few minor spikes in the last days of 2018. As weeks went by, the price slowly started to climb up, eventually entering an entire series of bull runs, which started on April 1st.

Most coins followed Bitcoin, although there were some that started performing in a positive way weeks, or even months before BTC itself. As for Bitcoin, it kept on growing, occasionally running into a barrier that would stop its climb, only to surpass it with the next wave. This went on until June 22nd, when the coin suddenly started to sink after reaching nearly $14,000. BTC price stopped at around $13,800, making its highest point this year over $10,000 higher than its lowest point. 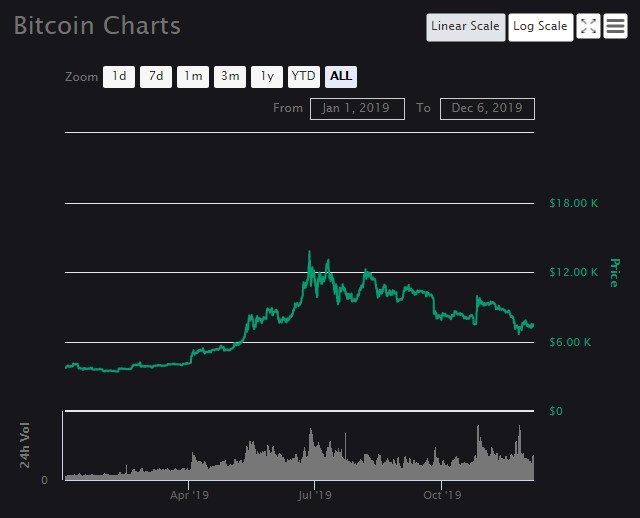 However, the real resistance level was later discovered to have been at $12,000, and this is the level that BTC only breached twice this year, even though it had several more attempts.

After reaching its highest point in June, BTC dropped to around $9,000, after which it attempted another climb, and then another, each weaker than the last. For a time, $10,000 started acting as its support, while $12,000 was the largest resistance. However, in mid-September, the coin broke the support and fell to the new one at $8,000, while $10,000 became the new resistance level.

From late September to late October, BTC remained just above its support at $8,000, stable but preparing to move. It finally did make a move in the last days of October when it once again attempted to breach $10,000, and it once again failed, which resulted in a large drop, which nearly took it to $6,000. Fortunately, the new support at $6,700 stopped the coin's fall in late November, and now, in the last several days, BTC has been trading in the green, going up only slightly.

What is next for Bitcoin?

As we have seen, Bitcoin's 2019 has not been calm. The first half of the year has been rather positive and successful. The second one was marked with drops and attempts to resist them, which usually resulted in failure. Even so, BTC is definitely ending this year with a price sitting twice as high as it was in the early days of 2019.

Interestingly enough, many expected BTC surge, which historically comes within the final days of the year. However, the first half of December is well underway, but no surge has arrived as of yet.

While the bull run appears to be missing, the community hopes to see one in early 2020, as the year will see another Bitcoin halving, where the block rewards will be cut in half. In order for BTC to remain profitable for the miners, its price would need to climb significantly higher than where it is right now.

However, there were many who believe that this surge will not arrive, either. Most people agree that halving will deliver an increase in BTC price, although whether it will be before or after the event still remains to be seen. In other words, there will be a surge, although it might not come for a while longer, which is definitely worth keeping in mind.