Bitcoin: the start of a new bull rally?

Over the last ten days, Bitcoin has once again become a topic for heated speculations as it made a strong move to the upside from its previous support at $6860 to the weekly high of $8455 over the said period of time. There were many theories floating around about the nature to this move: some argued that it was instigated by the feud between Iran and the United States, which was believed to have marked the beginning of World War III, others insisted that the rapid rise and the subsequent fall was dictated by Bitcoin’s strive to fill the CME futures gap that formed in a zone between $7,676 and $7,716.

Both viewpoints seem to be valid to a certain extent as Bitcoin has proven to be a safe haven asset and a better alternative to traditional methods for swift transfer of money in times of geopolitical turmoil. Whereas, filling the CME gaps has been some sort of Bitcoin’s sacred mission, which it had fulfilled many times before. But what traders are really trying to figure out is whether this move marked the end of consolidation within the confines of the $6500 - $7628 channel, which has been lingering since November 2019.

Are we witnessing the start of a new bull rally?

Obviously, it is too early to say with full certainty that Bitcoin has finally come back to its senses. A lot of traders aren’t too euphoric about the positive price action because they still remember the frustration after seeing an inverted head-and-shoulders on the 4-hour chart back in November of 2019, which eventually turned out to be a failed one as the consolidation persisted. 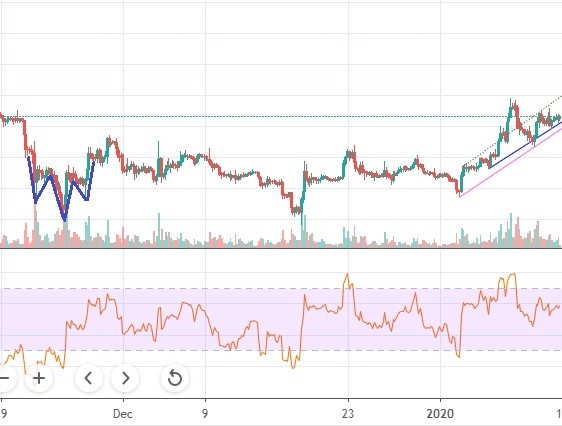 Right now, the tension runs high as Bitcoin has pierced decisively through rather strong resistance at $7628 and formed a bullish flag on the 12-hour chart that still requires some breaking to $8400 in order to confirm its readiness to keep on going uphill.

The 14-day RSI is lurking near the oversold zone, but not crossing it just yet, thus leaving some possibility for an upward maneuver. On the 4-hour BTC/USDT chart, the price appears to be moving up steadily, though not making higher-lows consistently. 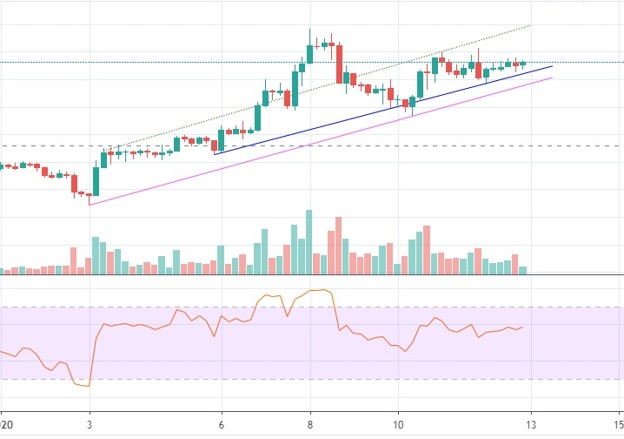 However, the Bitcoin dominance stats might be a fly in the ointment for those who are thinking about going long on BTC right now.

The graph shows that dominance is declining rather rapidly after a brief spike, towards the level of 68% - 68.2%, which occurred in mid-December, 2019. Right around that time, the price of BTC had crashed to $6556, its lowest price level in three months. 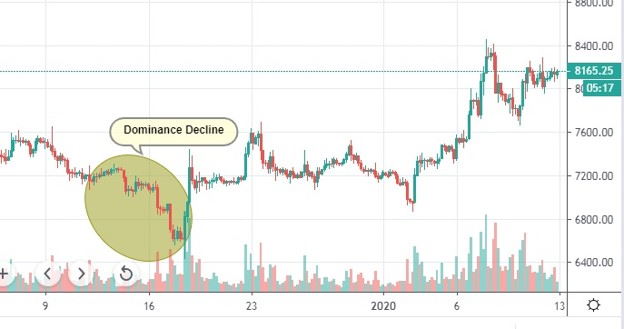 To summarize, it’s far too early to tell whether the bullish sentiment, which began to spread in the crypto community, could be substantiated by the price action. Although, according to the Fear & Greed index, it has already shifted towards “fear” a bit, now standing at 45 out of 100.

Technical indicators show a more optimistic picture, though the 20 and 30-day SMA, as well as the 30-day EMA, are on the sell-side. Same MA’s on shorter time frames point at a buy - most oscillators remain neutral for now.

Ethereum Classic (ETC) has been one the most unfortunate altcoins of this summer as it had suffered as many as three 51% attacks in a span of a month, the last...

Chainlink (LINK) belongs to the 93% of altcoins that saw a significant price decline in September. But in the case of LINK, it wasn’t just a mere correction that...

BitTorrent (BTT) had spent the entire summer being engaged in a moderately energetic rally that helped take the price up by 75.7% in 70 days, until it encountered...

In our previous Algorand (ALGO) price prediction article, we advised you to see how the market dealt with the bullish flag pattern before entering any trades, and that...

The year 2020 began phenomenally for Bitcoin SV (BSV) as the hard fork of Bitcoin took a rocket to the Moon in the first three weeks of the year and gained 500%...

The last few days brought a lot of excitement for traders as Bitcoin (BTC) went past the established macro resistance at $12,500 like a hot knife through butter on the backdrop...

Following the months of super dull price action, when Litecoin (LTC) schlepped back and forth between $42.45 and $51.4 without any particular direction, the now 9th...

Ethereum (ETH) has been rallying for the past three days on the back of the news about PayPal entering the cryptocurrency space and the introduction of deposit...

In our last CHZ price prediction article, we anticipated the price to breakout from the symmetrical triangle after going past the price level at $0.014. Since that publication...