Bitcoin SV (BSV) still remains among the top 10 largest cryptocurrencies in the entire crypto industry, currently holding the 9th spot on the list. The coin will celebrate its first birthday in about a month, so let's take a look at what it has been through in the past year, and try to see what can be deduced about its future.

As many probably remember, Bitcoin SV came to be when Bitcoin Cash forked in mid-November 2018 in order to deliver a new update to its blockchain. Before the hard fork took place, the project's developers split into two groups, both wanting different things, and both convinced that their idea is the right one.

After the fork, Bitcoin SV emerged as yet another member of the Bitcoin family, and while it remains a controversial coin, it still managed to adopt a lot of Bitcoin family attributes.

It also kept its popularity among some coin holders, which is proven by the fact that it has the 9th largest market cap in the crypto industry.

At the time of launch, its price was at around $88 per coin, which quickly surged to past 200 in the following week, during the hash war that led to the second market crash in 2018. The crash brought BSV down as well, and by November 23rd, the coin's price was only half of its original price, sitting at $44.90. 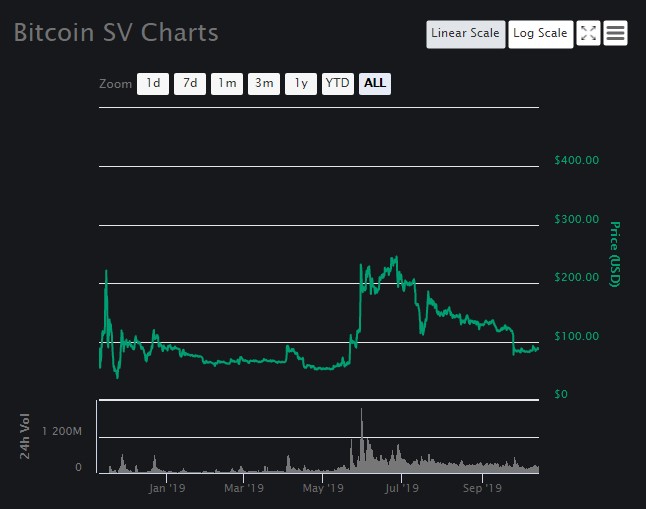 However, only a week later, it climbed back to its largest resistance at $100. It managed to briefly breach it several times, but each time was followed by a correction that returned the price below this level.

Then came 2019, and BSV seemingly stabilized at around $65, only having the slightest fluctuations that resulted in the coin's price going up and down by about $1 or $2 on average. This situation lasted for three whole months, and it finally changed on April 1st, when Bitcoin itself saw its first bull run in over a year. BSV followed only slightly, once again climbing up to $100, and once again being rejected, this time to $52.

However, in the second half of May 2019, the coin took part in another bull run, and this time it managed to break the resistance at $100, and it climbed back to $200, breaking this resistance as well. In fact, it hit its ATH on June 26th, hitting $237.71 at its highest.

Unfortunately for BSV, when the bull run ended and correction took place, the coin started falling once more. It first dropped to $200, which started acting as its new support. After that, it broke this support, fluctuating between $100 and $200 for a time, although its overall price kept dropping. It finally broke the support at $100 on September 24th, dropping below this level for one last time. At the moment, its price is at $87, after going between $82 and $88 for almost a month now.

What to expect of BSV in the future?

Bitcoin SV doesn't seem to have enough support or use to decouple from Bitcoin and start carving its own path. In other words, the coin pretty much does what Bitcoin does at this point, which puts it in the same situation with many other cryptocurrencies.

In other words, its performance pretty much depends on what BTC will do, which is true for the majority of altcoins. BSV also remains quite controversial still, and while its market cap is pretty large, its trading volume is quite low when compared to most other coins in the top 10 list. In fact, every coin on the list except BSV, BNB, and XLM has its volume above $1 billion, while neither of these three has a volume larger than $300 million.