After an absolutely enormous price increase that Bitcoin SV demonstrated at the beginning of the year: 400% in less than two weeks of January and a 160% rise in one day - February 14, which might have been a very nice Valentine’s Day present for some of the most industrious traders, Bitcoin SV has predictably entered a period of retracement that is now gradually transforming into threat of a downtrend.

The price explosion of BSV was based mostly on the hype around the court hearing involving Craig Wright and a ridiculous saga of the lost private key to Bitcoin wallets, which allegedly hold as many as $9 billion worth of BTC. The press furor that surrounded this event has gradually died down, along with the pump of BSV, which now has to face the reality that is the coronavirus and the overall decline in both tradition and cryptocurrency markets. 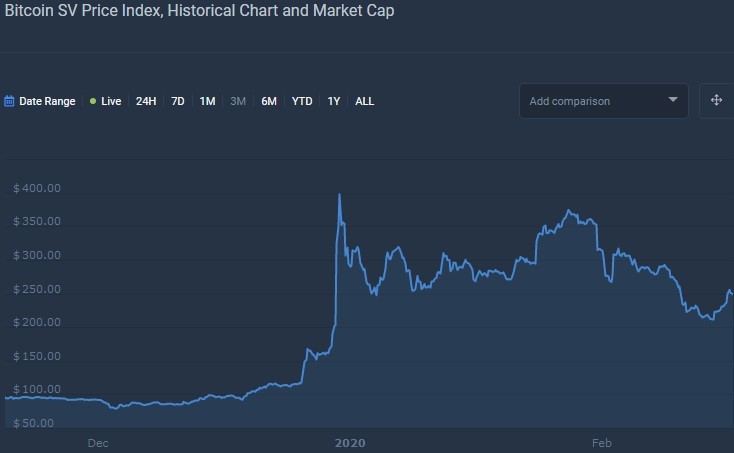 Just like that, the incredible yearly gains of 276% - most of which, as already mentioned, is courtesy of the January - February bull rally, which was even considered as a start of the altseason - have run their course and were replaced by the price decline that Bitcoin SV has been showcasing throughout the past 30 days: -17% over the said period and -6.7% in a week. The fairytale has ended, and now BSV has to face the hard punch by the correction that threatens to escalate into a fully-fledged downtrend.

BSV is in a tough, but not a critical, situation

By looking at the daily chart, we can conclude that the Bitcoin SV price action is finally starting to look more healthy than it was during the infamous pump. Bitcoin, the forefather of BSV, has already slid below the 200-period EMA, which is a worrisome signal for those who were pinning their hopes on the bulls, since falling underneath this moving average usually confirms the trend reversal.

However, BSV itself has managed to stay way above that indicator, even though the price has crashed by 56% to the interim lows at $205. This occurrence means that the bears have failed, at least for now, to push BSV below the significant psychological level at $200, a fact which potentially hints at the formation of a new higher low at the $205 - $208 resistance. But the chart also shows that Bitcoin SV is currently being rejected by the 50-period EMA, and judging by the relative minimality of trading volume, it is highly likely that the price would be unable break through this level for some time and would go into a consolidation mode with the confines of $188 - $254 horizontal channel. 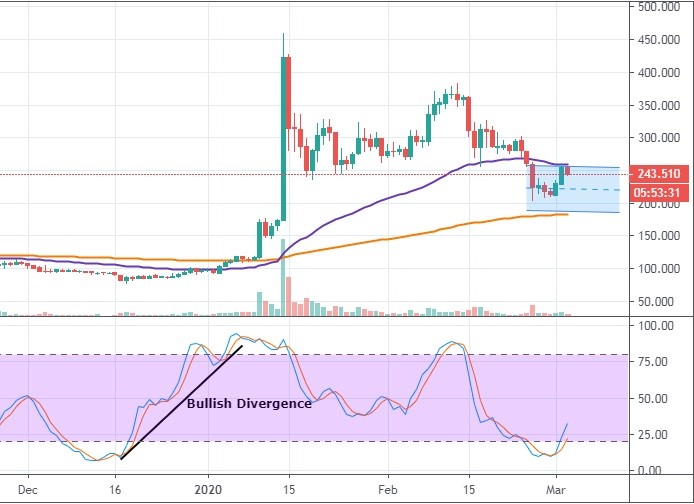 Some might claim that we see a bullish crossover Stochastic, together with the fact that it is presently in the oversold region. Therefore, we could be looking at a potential price increase; however, historically, this pattern hasn’t always played out well for Bitcoin SV, though Stoch does provide good signals when it forms a divergence, as it did in mid-December 2019, right before the pump.

To summarize, what we really should be expecting from BSV is a relatively prolonged period of sideways trading that still has the potential to transform into the continuation of the uptrend - that is, of course, if the price manages to stay above the 200EMA.