Bitcoin Satoshi's Vision, or Bitcoin SV (BSV), still remains one of the largest cryptocurrencies in the crypto industry. The coin currently occupies the 9th spot on the list of largest cryptos, with a market cap of $2.41 billion.

However, despite the fact that it is one of the most controversial cryptocurrencies — right alongside Tether (USDT), another crypto which sits among the top 10 — it still has quite a few users around the world. In fact, its daily trading volume right now sits at $670.8 million. Meanwhile, its price is currently at $133.40, after seeing a 3.76% increase in the last 24 hours.

Obviously, the coin's controversial past is not enough for BSV to sink to a lower spot on the list, and with so many users out there, a lot of people are wondering what to expect of it. This is what we will try to answer today, but before we focus on the future, let's first take a look at its past.

As many likely know, Bitcoin SV is not an old coin. In fact, it will be celebrating its first birthday in around 10 days. However, in this short period during which it has existed, the coin has been known for its controversial nature.

Even its origin itself is an issue for many, as the coin came to be when a fraction of the Bitcoin Cash (BCH) community attempted to take over the blockchain during the hard fork in mid-November 2018. The group, led by Dr. Craig Wright, caused the hash wars that lasted for about a week and brought a second market crash of 2018.

After losing the battle for the right to call their fork of the blockchain, the true BCH, they settled at Bitcoin SV. Since then, the coin pretty much went its own, separate way. Its price surged during the hash wars as many believed that the coin might be the dominant one, and it reached $173. However, after the victory of Bitcoin Cash, the price fell with the rest of the market, hitting its bottom at $37. 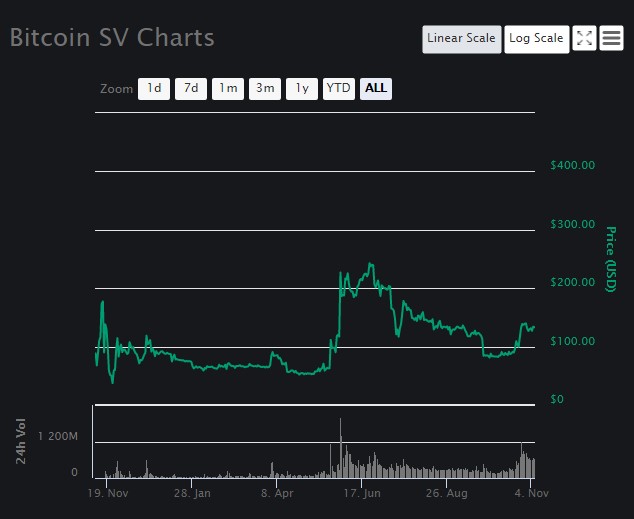 Soon enough, it climbed back up, although it was stopped by a resistance level at $100. This resistance kept the coin's price from climbing further up from late November 2018 until May 23rd, 2019. This was when BSV finally started participating in Bitcoin's rally, and it did not only breach $100, but it also climbed up to $200 in a matter of a few days.

The resistance at $200 was also breached, several times, although the coin kept returning below it. When the rally finally ended in the second half of June, BSV once again started sinking, albeit slowly.  By the end of September, it once again found itself below $100, and it remained there for about a month. Then, in late October, it started climbing once more, it broke the resistance at $100, and we currently find it at $133,40, as mentioned earlier.

What will happen to BSV?

A large portion of the crypto community does not have much faith in BSV, and they see it as an imposter, a coin created by a fraud who tried to convince the world that he was Bitcoin's creator. Of course, everyone knows that Craig Wright's claims are false and that he never managed to prove any of them.

While it is undeniable that BSV still has a lot of users supporting him, most would tell that this support will fade away over time. Whether that is true or not remains to be seen. However, BSV has proven its competence by remaining in the top 10 list for a year now. While its price is not even close to that of BTC, or even that of BCH, for that matter — it remains a popular and used cryptocurrency, at least for now.

Its price had demonstrated the ability to grow rather sharply under the right conditions, and as the year approaches its end, the crypto markets see new signs of pending bull runs. It is likely that BSV will once again return to the $200 mark, or maybe even exceed it if BTC climbs above $10,000. If not, it might remain between $200 and $100, unless a new bear market strikes. In that case, BSV is likely to go back below $100, and maybe even return to its bottom.