Last week ended with Bitcoin making yet another frog leap from the consolidation level at $6700 to the current phase of buying pressure at $7400. This price increase happened on the background of optimism, displayed on the traditional markets, which are believed to have an increasing correlation with that of Bitcoin.

A 5% price appreciation of the S&P 500 index translated to the 9.7% spurt performed by Bitcoin during a day and a half of trading, resulting in the new higher high at $7400. Over the week, BTC has shown a 16% price increase, which is only 0.4% short of its cumulative losses during the previous month. The first cryptocurrency, however, is still 8% below the point of the total recovery, but that gap could be narrowed, or even closed completely, in a matter of days, if not hours, given that the present bullish pressure persists. 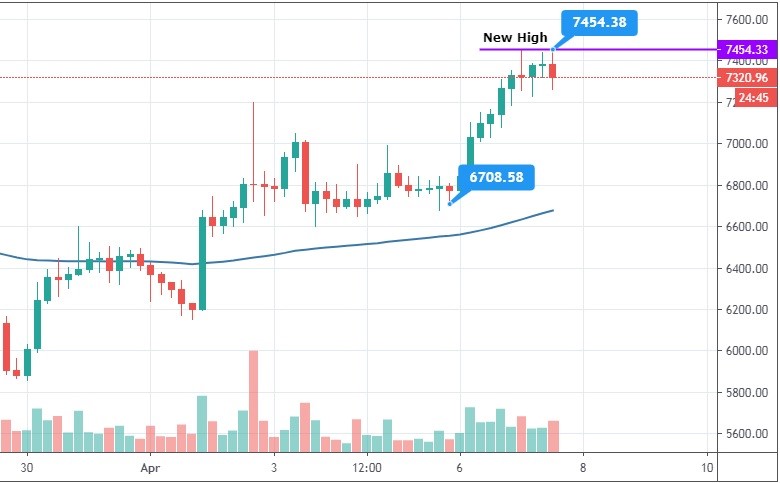 For the first time since the notorious coronavirus had been declared the global pandemic, the world has been given a chance to take a breather as the daily numbers of new cases and deaths stalled and even began to decrease in certain countries. This fact has immediately spurred the talks about the effectiveness of the global lockdown and the possible relief from the insane overload of the medical system worldwide.

The markets reacted immediately by initiating the most prolonged bull run since the inception of the crisis, which was also instigated, in no small way, by the $2 trillion economic relief package issued by the US government two weeks ago. While the containment of the virus spread is certainly a positive notion, the optimism that it instilled could be premature - the same applies to the optimism in the markets.

The injection of an unprecedented volume of liquidity, which, in essence, is just a product of the US money printing machine, is likely to be just a temporary relief, which could be followed by another slump once the impact of a global lockdown on the real economy begins to emerge, while the pumped-in liquidity will dissolve.

The anticipated global recession will surely have negative consequences for the price of Bitcoin since it is still widely perceived as a highly risky speculative instrument. Therefore, it is far too early to go long on BTC, or any other cryptocurrency, although the current market finally provides opportunities for swing trading.

Even though it feels great to let go of panic and take a ride on a bullish wave, let’s not forget that on the macro level, Bitcoin is still deep in the bear market that has been worsened by the aforementioned factors. Therefore, traders should be prepared for a rapid pullback even if the price manages to test the 99-period EMA on the weekly time frame.

Five weeks of uninterrupted growth in the present conditions must be already overheating the market, so there is a need for a healthy retracement to $6400 - $6700 - before or soon after the test of the 99 EMA - to allow the bulls to prepare for the next phase of price growth.

The 14-period RSI, which has also been moving within the confines of the downtrend, leaves enough space for such a move. Otherwise, we would strongly suspect the market manipulation carried out by the big capital for the purpose of creating an artificial demand only to drop the price below $6000 again.