Bitcoin Ranging in Anticipation of the Next Move

Some six weeks ago, cryptocurrency traders were living in anticipation of enormous profits from what seemed to be an altseason that emerged on the back of the declining Bitcoin dominance. But in a span of a very short time, they were forced to awake to the reality and face the all-encompassing crisis that is running rampant across all markets.

Bitcoin regains dominance only to stagnate

Now, the altseason seems like a distant hazy dream, while the price action of Bitcoin is once again on everyone’s mind. Since February 13, Bitcoin dominance has been on a steady rise, increasing from the six-month low at 62% to 67.8%, with the largest spike occurring right after the markets have lost their marbles. Subsequently, the capital began flowing rapidly from altcoins to BTC, which is evident from the total market capitalization chart, which shows that money is currently flowing almost exclusively into the first cryptocurrency. In contrast, Ethereum and altcoins remain on a starvation diet. 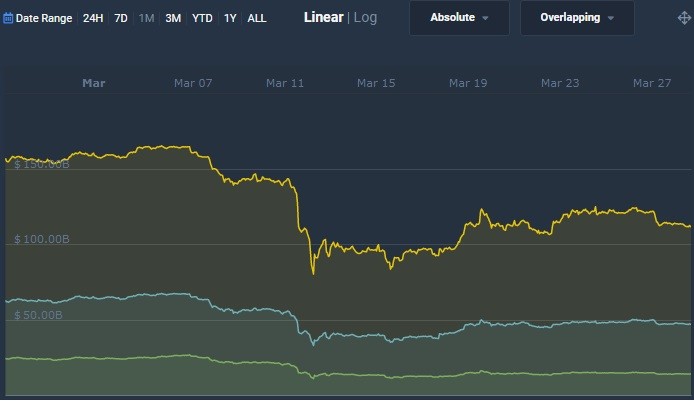 And even though cryptocurrencies, in general, didn’t turn out to be the safe haven, contrary to the expectation of many adepts, Bitcoin has been doing significantly better in this regard since investors, not to mention traders, have shown it at least some degree of trust.

However, this show of trust isn’t even close to being substantial for the total recovery from the knockdown punch, which is evident from the display of the 25-period Money Flow Index on the daily time frame. 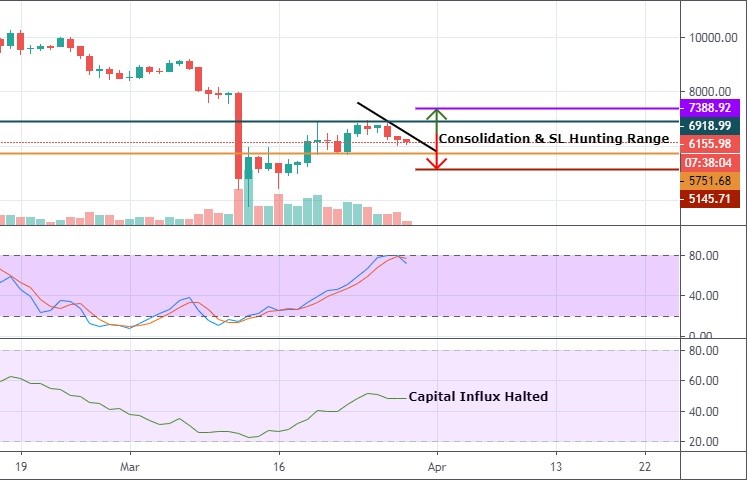 Since the crash, which pushed MFI to -20, the index has climbed no higher than 50, which is characteristic of stagnation rather than growth. What’s interesting, though, is that even in the face of a global recession, MFI didn’t actually go below -20, as it did back in November of 2018, when the price approached the $3000 zone. This could only mean that the present confidence in BTC is higher than before, even against the backdrop of the worldwide panic-turned-uncertainty that is likely to linger for months.

Nevertheless, that confidence is still way too far from translating to even a shadow of a bull run, mainly because the correlation with the conventional markets, primarily the S&P 500 index, is getting more evident, but they have utterly failed to stabilize, despite the massive infusion of liquidity on the part of Federal Reserve. Therefore, the chapter that follows the one called “Doomsday” will be titled “Stagnation,” in which the price of BTC is going to move in the range between $5700 and $6900 for a prolonged period of time, given that the authorities do manage to sustain the current crisis.

We see a triangle forming on that time frame, but even when Bitcoin breaks it, the impulse would be weak because there’s presently no new capital coming into the first cryptocurrency, which points to the fact that big players are satisfied with this price level, at which they will be gaining the position size for the time being. In the meantime, retail traders shouldn’t forget that now would be the time for stop-loss hunting, which means that the sudden spikes to $7400 or drops to $5100 are to be expected over the course of the coming week.