Bitcoin is a coin that hardly needs any introduction. It is the first crypto ever to be created, as well as the largest coin in the current crypto market. Its' market cap exceeds half of the total crypto market's market cap, and it is the dominant coin, as it has always been in the past decade.

Bitcoin is the first crypto that any newcomer to the crypto industry explores, and while its technology is considered old and outdated — especially when compared to the newest projects — it is still highly respected for its value.

And, while we are on the topic of its value, it is highly volatile. In fact, Bitcoin is so dominant, so influential, that it commands the prices of the entire crypto market. Many like to claim that investing in altcoins makes no sense, as they move how Bitcoin dictates. Of course, this is only partially true, and coins are known to follow their own path. But it is undeniable that BTC holds major influence over them.

But, what can be expected of Bitcoin's own price in the future? This is as difficult to predict as it is with any other asset, especially those in crypto space. Cryptocurrencies have ignored a lot of events that should have taken their price to the moon, as well as those that should have knocked it down in 2019.

The hack of Binance from a few months ago would have had a major impact on crypto prices a few years back, or so everybody thought. In 2019, however, no coin paid any attention to it. Similarly, Bitcoin Futures exchange, Bakkt, finally saw launch only weeks ago, and cryptocurrencies once again failed to react in any meaningful way, including Bitcoin itself.

BTC price is known for its volatility, but it seems to be following its own rules these days, instead of just allowing any event to manipulate it, as it did before. This might be seen as a sign of maturing, although it is not likely that great stability will come along. In fact, many believed that BTC would soar in 2019 and reach greater heights than ever before.

This opinion was further encouraged by the coin's behavior earlier this year. On April 1st, BTC surged up, in the first of several major bull runs that had taken place over the next few weeks. It did so again in the first days of May and June, eventually going from $3,200 — its price at the beginning of the year — to almost $14,000 in only a few months. 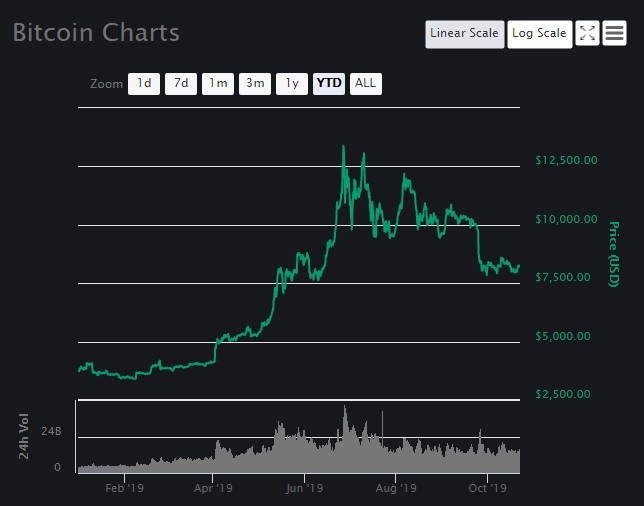 After that, corrections started to arrive, and the BTC price was struggling to stay up. It first fell to $12,000, and then to $10,000, only to finally drop to $8,200, This is where it has been holding up for about a month now, awaiting the end of the year, when some expect a new bull run, while others think that the next drop is about to take place.

So, what will actually happen? The truth of it is that nobody knows. A few years back, BTC would have definitely surged with the end of the year approaches. However, with the situation being as it is right now, it seems like there are no such certainties anymore. The end of the year might bring changes, though, so keeping a close eye on the coin is certainly a good idea.