Bitcoin Not So Dominant Anymore, Yet Strong

In the last seven days, Bitcoin has once again become the talk of the town. After a predicted retraction phase, during which the price crawled down from $9180 to $8260, the first cryptocurrency made yet another leap from the 50-period moving average to $8570. The fact that it didn’t cross the average to the downside signified the presence of bullish sentiment on the market, which was later confirmed by a strong upside impulse.

It’s been a month since Bitcoin began giving hints about the possible inception of the new bull market, which traders have been waiting for since the end of the notorious crypto winter. It’s too early to say whether the ongoing rally would mature into a fully-fledged upward trend, but the expectations are running higher with every price swing made on a large time frame.

Speaking in numbers, Bitcoin has gained 11% over the previous week, which is a respectable showing, but certainly not the most impressive one out of all top cryptocurrencies. Ethereum, for instance, has been pumping much stronger than the dominant cryptocurrency, outperforming Bitcoin by 5% in terms of pure gains. Anyone who takes a glance at the current situation on the cryptocurrency market will notice that altcoins are displaying much better results than BTC, gaining 10% -30% over the same period of time. The reason for that lies in the continuously declining Bitcoin domination, which has dropped from 67.8% to 66.61% in less than five days. 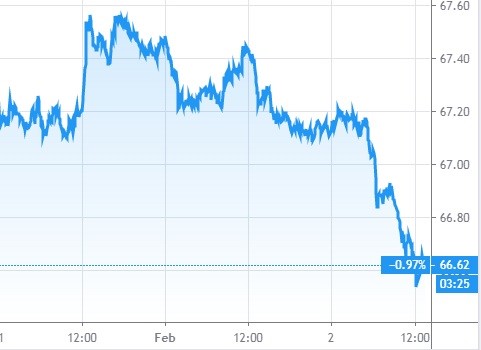 This could force traders to consider the possibility of trading BTC against altcoins, but they shouldn’t forget that the so-called altseason, the signs of this are causing heated discussion on trading forums, could end as fast as it began.

Let’s not forget that the price of Bitcoin is already affected not only by the news and events within the crypto industry but also by the geopolitics. Remember how one negative tweet from Donald Trump caused such nervousness on the market that the price of BTC dropped significantly? Why wouldn’t Brexit, which has been officially carried out last week, has a similarly powerful but positive effect on the value of Bitcoin? After all, it’s earning a reputation as a safety asset for the times of political and economic turmoil. Therefore, regardless of the momentary loss of dominance, the first cryptocurrency is likely to continue climbing in the direction of the very important resistance at $10,000.

Right now, Bitcoin is consolidating after the significant upswing, which took place in the form of a price pattern called three advancing soldiers on the daily BTC/USDT chart. 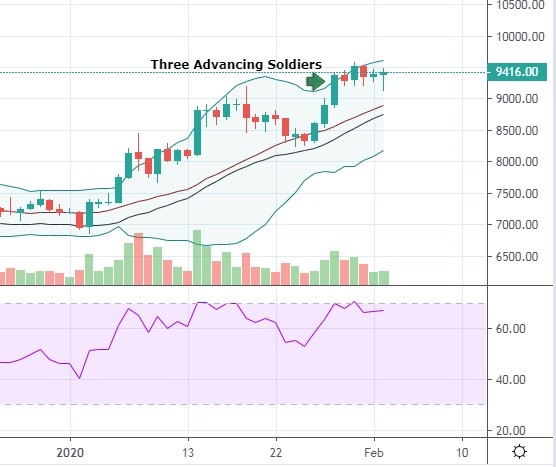 Three advancing soldiers is a textbook bullish pattern that signified the change in market sentiment and the overwhelming presence of buyers. The positive price movement ended in Bitcoin making another higher high, thus confirming its bullish intentions.

However, such factors as the closedness of 14-period RSI to the overbought zone should also be considered when deciding which trade to enter. The oscillator is at 75 now, which still gives Bitcoin some room to breathe, but the price decline should also be expected, most probably to $9000. To summarize, the Bitcoin market is yet to run out of steam, and it could even provide an extra incentive, should BTC regain its dominance.