Bitcoin Is Crashing Along With Other Financial Markets

Not even a month has passed, but the market sentiment has already switched from optimism to extreme fear that stems from the threat of coronavirus pandemic, which has now engulfed the entire planet and affected the cryptocurrency market, as well as all other markets, except for the gold one, in an immensely negative way.

As of the time of writing, the oil prices have collapsed by 32%, the most significant one-day decline since the Gulf War of 1991, which dragged down the currencies of the countries whose economy is based on the export of oil and gas. The S&P 500 index, to which Bitcoin has the largest correlation among other conventional markets, has dropped by 8% on the day. All these occurrences have had a direct impact on the price of Bitcoin, which had already waved farewell to the uptrend that had been shaping up during the first months and a half of the year. 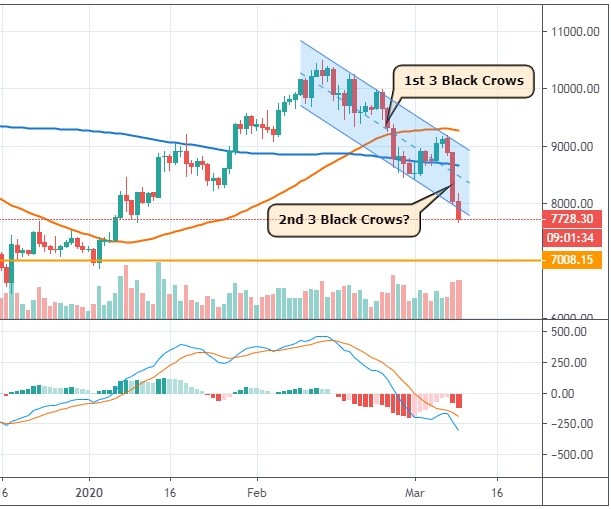 Over the past three days, the price of BTC has plunged by 15% and dropped significantly below the 200-period moving average while sending the MACD lines, which are already running far below zero, further away from each other, thus proving that the bears became firmly entrenched in this market. There is absolutely no doubt that we are now in a full-scale bear market as the price of BTC has already formed four lower highs and dropped below the critical moving average. Moreover, it appears that the price is finalizing the formation of yet another bearish pattern dubbed three black crows, the second one in two weeks. The first one didn’t result in a massive drop - instead, it lured the reluctant traders into a bull trap by dancing around the 200MA.

And now we see Bitcoin making an attempt to breach the channel line on the daily time frame - the successful completion of this move would provoke an accelerated landslide of the price, possibly to $7000, which served as a support during the formation of the inverted head and shoulders pattern which preceded the minor bull market of January-February.

Right now, there is hardly any basis for the price recovery since the global financial markets have been thrown into disarray, whereas Bitcoin has failed to prove its worth as a safe haven asset in the face of the unfolding crisis, at least for the time being. 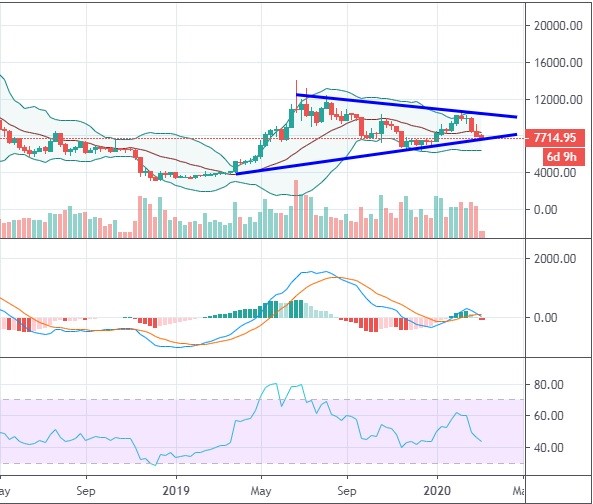 The weekly time frame shows that there is still some hope left for the continuation of what now appears to be an extended uptrend that began last April, as Bitcoin is presently holding at the level of $7729, which is an edge of the higher low in this particular structure. Moreover, Bitcoin is now approaching the point where it has to break out of the ascending wedge formation either to the upside or the downside.

The move that Bitcoin is going to take in the next couple of weeks will determine its behavior over the first quarter of 2020. Unfortunately for those who went long on BTC somewhere at $9000, the probability of the price rebounding to that level or above is substantially lower than the one that suggests Bitcoin falling to the pre-rally level of $7000 or even $6500.

The bears still reign over this market, though this situation presents a prime opportunity to buy BTC once it reaches the potential bottom because once the panic of coronavirus settles, the factor of approaching halving could help BTC rebound strongly to $10,000 or higher.