Bitcoin Gold is one of the numerous Bitcoin forks which emerged over the last several years. This particular one occurred on the block number 419406 and entailed a switch from the SHA256 algorithm to the one called Equihash in an attempt to make mining more democratic.

The fork was initiated by Jack Lao, the developer of Lightning ASIC. It allowed miners to bypass ASIC restrictions and begin mining using graphic processing units. Therefore, Bitcoin Gold became the only coin out of the three total forks that provides means for GPU mining, and also adjusts the difficulty with every verified block. There has been no ICO of Bitcoin Gold because of some controversies which had arisen during the pre-mining process. Therefore, we should compare the current price of BTG with the one at the time of the exchange listing.

Bitcoin Gold is way past its prime time - and prime price - which was right at the mentioned exchange listing, which occurred in the fall of 2017. At that period, BTG had reached its peak price of around $480 twice, before beginning its inevitable descending almost to the very bottom of the price range. Naturally, the market capitalization of this coin has followed suit.

Bitcoin Gold began the year of 2019 slightly above the $12 mark, had briefly established the support line at $8 before entering the bull run, which lasted throughout the summer and climaxed when the price reached $32,25. 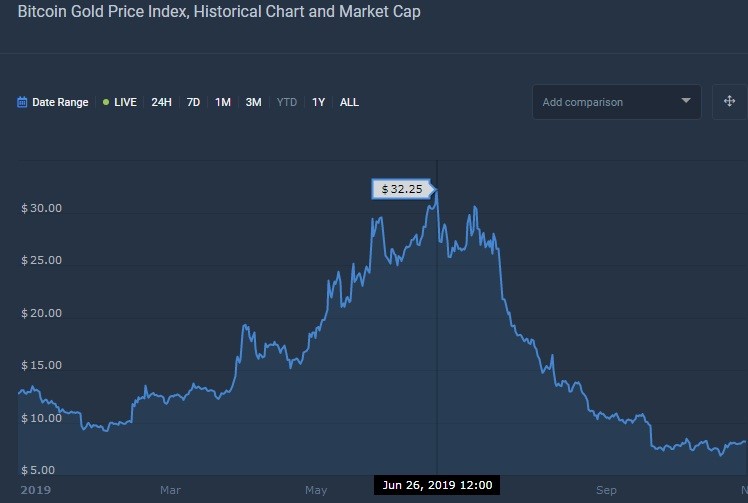 Once again, BTG made a double-touch of the resistant line, which happened to be $30, before throwing itself off the cliff to the bottom of the chart.

What the future could hold for BTG

As of now, Bitcoin Gold is sitting firmly below the $8,80 resistance level, showing practically no signs of recovery after the bears took charge of the market. The holders of BTG haven't been particularly happy with the performance of this cryptocurrency in 2019 because it displayed the negative gains of -36,7% since the inception of the year and - 98,2% on the all-time chart. 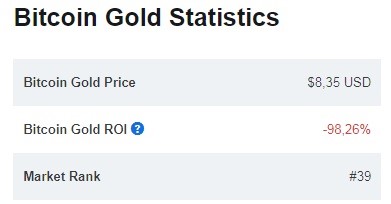 On this chart that depicts the price action of Bitcoin Gold of the current month, we can see that the uphill struggle to breach the $8,5 resistance level always ends up is a deeper dip - a short-term trend that is most likely to continue for the duration of November. 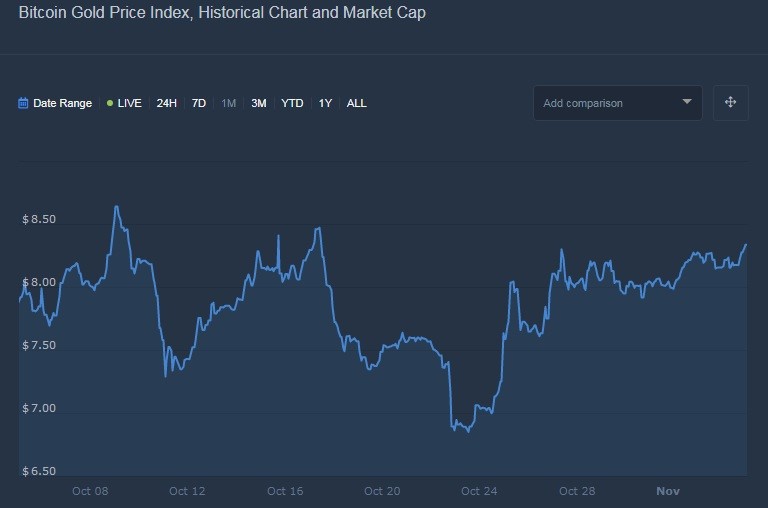 The analysis of the trading volume indicates that as of now, Bitcoin Gold has no real potential for any impulses to the upside, let alone initiating a bull run, unless the entire market gets back into the green for longer than a few days.

All in all, Bitcoin Gold has been one of the worst performers among altcoin from the top 20, with even the neighboring coins like Holo and Ravencoin displaying 100+% gains. It all points out to the probability of BTG continuing to frustrate the holders while traders could be dumping the hopeless coin en masse, which would result in the further price stagnation, or even decline. With no grandiose system updates or partnerships on the horizon, Bitcoin Gold could easily fall out of the top 50 over the course of 2020.