The last few days have brought a major price increase for a number of cryptos. In turn, traders and investors started buying coins once again, and even their market caps and daily volumes surged higher than ever in the past several months.

Even so, most coins have been surpassed by Tether (USDT), which managed to rise to the position of the fifth largest crypto. However, Bitcoin Cash (BCH) still stands in its way, remaining the fourth largest coin, with a market cap of $4.7 billion, and a price of $261.04 at the time of writing.

BCH has seen a decent performance in the past few days, and even in the last 24 hours, its price grew 4.30% against the USD and 1.85% against BTC itself. Meanwhile, BCH has seen a major increase in daily trades, with a trading volume of $3.3 billion.

Of course, this is still quite far away from the coin's all-time high, as it was in December 2017. Back then, BCH exceeded $4,000 after less than half a year since its creation.

Unfortunately, as soon as the market crashed, BCH did, as well. Within days, its price was below $3,000 again, and by early February, BCH dropped below $1,000. It reached $912 before it grew again slightly, only to drop further down. Then came April and May of 2018, which brought a new surge, and many expected that crypto winter was over. BCH surged with the rest of the market, but the following drop hit it stronger than ever before, knocking its price from $1,500 to $480.

Of course, the coin reached this after dropping for the entire summer, but this was not the lowest point in its relatively short lifetime. No, the lowest point was reached in November 2018, after its own hard fork resulted in a hash war. BCH community split and fought, with each side hoping that their fork will continue its existence as Bitcoin Cash. Eventually, the real BCH won, while the other coin became Bitcoin SV.

However, this event triggered the second market crash of 2018, and the prices of almost all coins dropped to lows that were not seen in over a year, while BCH itself finally found its bottom at $80.

Then, in 2019, the situation started to improve around April 1st, when Bitcoin saw its first real bull run. Bitcoin Cash followed, breaking one resistance after another in a series of small bull runs until it was back up at $400. It remained slightly above this level until mid-July. 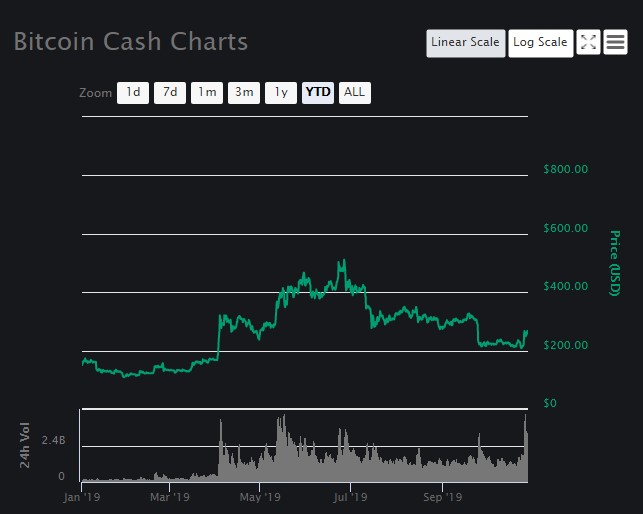 This was a few weeks after the correction took place, and all coins started dropping once again. BCH spent the rest of the summer held by the support level at $300, until it broke this one as well in the second half of September 2019.

Ever since then, it was held by support at $220, until it started growing yet again in the few days. The new surge allowed it to climb only slightly, however, and it currently sits at $260, going above and beyond this level.

What will BCH do next?

Bitcoin Cash's price performance seems to be tied to BTC quite closely, and comparing their charts shows it. In other words, BCH seems to be ready to follow whatever Bitcoin itself does, so trying to predict the future of one also means predicting the future of the other.

With that in mind, what will happen to BCH? Optimistic predictions claim that it will grow as the year approaches its end, likely due to the hype that usually arrives in the last months of each year. Of course, there are no guarantees when it comes to crypto prices, so watching the performance of its price closely is a must for anyone who might be planning to invest in this coin.