Bitcoin Cash is likely the best-known fork of Bitcoin, in addition to also being the largest one. The coin separated from Bitcoin's main blockchain back in mid-2017, and since then, it became well-known for being a more efficient version, at least in theory.

However, in practice, BCH became a bit more stable than BTC itself, especially in 2019. It had its fair share of difficulties, one of which was a hard fork that took place in November last year, which led to the creation of BSV, hash war, and a second market crash in 2018.

Now, however, all of that is in the past, and we are interested in seeing what the coin might experience in its future. But first, let's quickly go through the coin's history and see if there are any indications of its future behavior.

The history of Bitcoin Cash

As mentioned, Bitcoin Cash emerged in mid-2017 as a fork of Bitcoin. It came to be due to a disagreement within the BTC community, and how the blockchain should proceed. One part wanted to deliver an update that would increase the size of BTC blocks, while the other part disliked the idea. From the conflict, Bitcoin Cash was born.

Unfortunately, once 2018 had arrived, BCH took a nosedive which was only stopped at $1,000. It attempted another surge in April/May 2018, but when this attempt failed, it crashed even stronger. The crash broke its support at $1,000, and BCH hit its next strongest support at $500. This level held for a few months, until November 2018, when the earlier mentioned hard fork took place and BSV emerged from the resulting chaos. Once again, the community had a disagreement, and the following hash wars resulted in a market crash that led BCH price from $450 to $88.95 — the lowest point in its history. 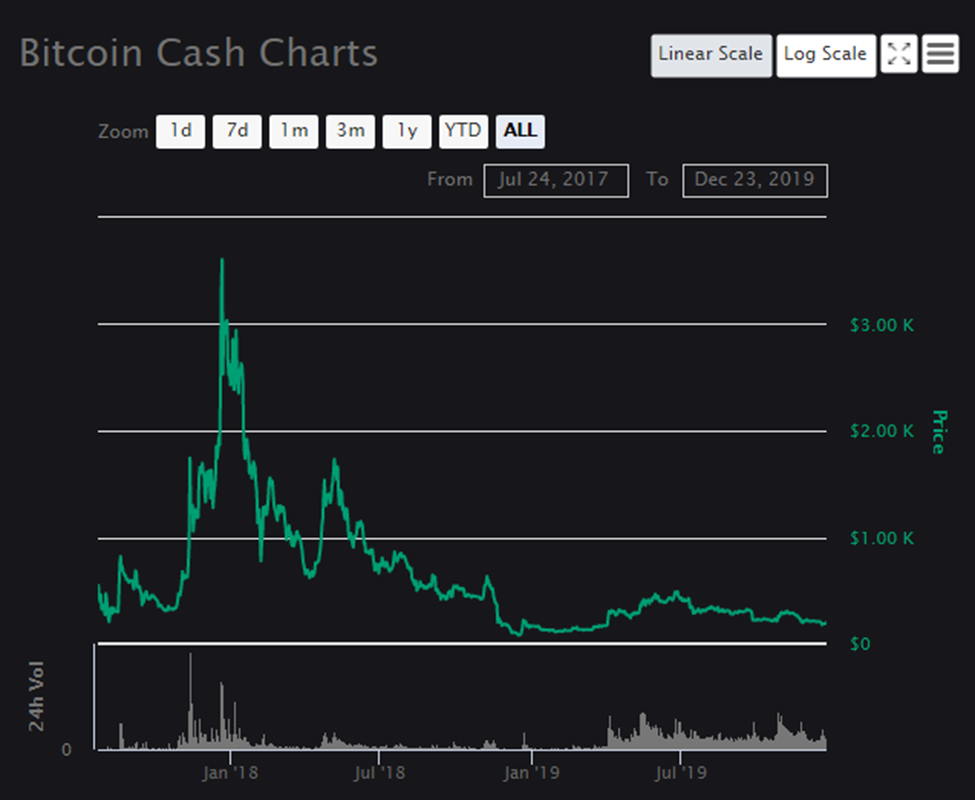 In 2019, the coin saw some level of recovery, at least during the first half of the year. It to grow back and breach a support-turned-resistance at $450, once again turning it into a support. Unfortunately, it also broke it once more when the bull runs ended in late June, which led to the coin's slow decline to its current price of $195.

Where will BCH go from here?

While BCH price definitely is not what it used to be, the coin is still the 5th largest crypto in the world, bested by Tether (USDT), XRP, Ethereum (ETH). and Bitcoin (BTC) itself. It has a market cap of $3.5 billion and a daily volume of $1.65 billion. In other words, it sees a lot of use, and there is quite a lot of money in it.

However, it is undeniable that BCH does not follow Bitcoin's lead as closely as many other coins. Earlier this year. BTC had gone way past half-way towards its old ATH. BCH, on the other hand, barely made one-tenth of the way towards its own ATH.

The coin is more stable than ever, but its price remains rather low. It spent half of the year locked between a support at $240 and a resistance at $480, while the second half saw it break its support and venture below the 'bottom.' In other words, BCH will likely need a large market recovery to start growing again, while it is not going to do much on its own.

Whether this means that the coin is finding stability, or that it has no strength to venture further up, it remains to be seen. For now, however, BCH is likely to remain where it is, with only small price fluctuations in the near future.