Ever since the notorious market crash in March, Bitcoin Cash (BCH) has never been the same jolly gainer it was during the first quarter of the year. Once the price dived from $493 - this year’s high - traders saw only a single bull rally that’s worthy of attention. For the remainder of the time, the price has been oscillating between the support at $215 and the horizontal channel’s resistance at $270. 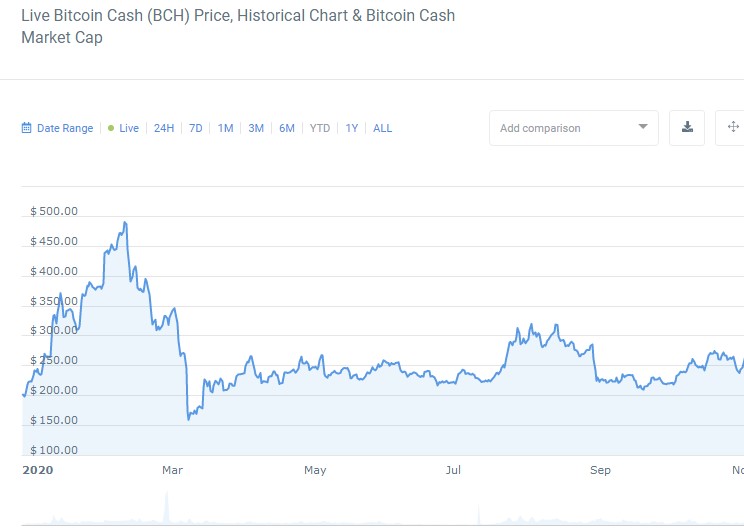 As a result, BCH’s performance throughout the past year has been underwhelming for a top-ranked altcoin, much like the ones of Ripple (XRP) and Litecoin (LTC). Therefore, if you want to buy Bitcoin Cash for the investment portfolio - think twice because it has a negative return on investment showings on a macro level. Over the past year, BCH has recorded the following results in three major markets:

Remains incarcerated inside the horizontal channel

But while large players are obviously not very eager to buy Bitcoin Cash en masse, its current market structure on the monthly chart provides for a nice 20% trading range with long-established levels of support and resistance. 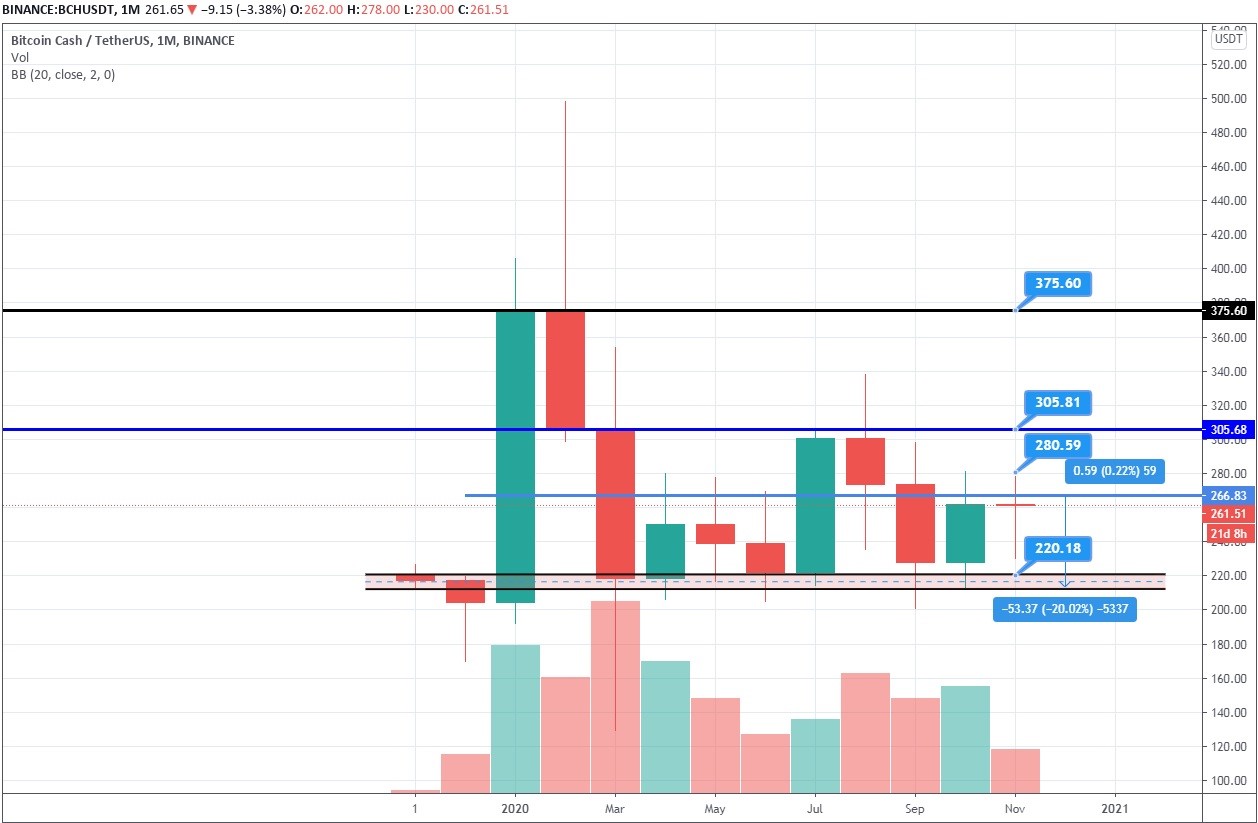 The current situation on this time frame dictates that the price is attempting a breakout to the upside above the resistance at $270, evidently aiming at the broader resistance level at $305, passing which might lead to a fast break to $375. However, if BCH gets rejected at $267, a predicted drop to $220 is likely to happen.

The weekly time frame actually shows that Bitcoin Cash is already being rejected at $270, with the bearish candle engulfing the previous two weekly candles, thus flashing a mild BCH trading signal to sell, with the buy-back target either at$ 240 (conservative) or $225 - $215 (riskier). 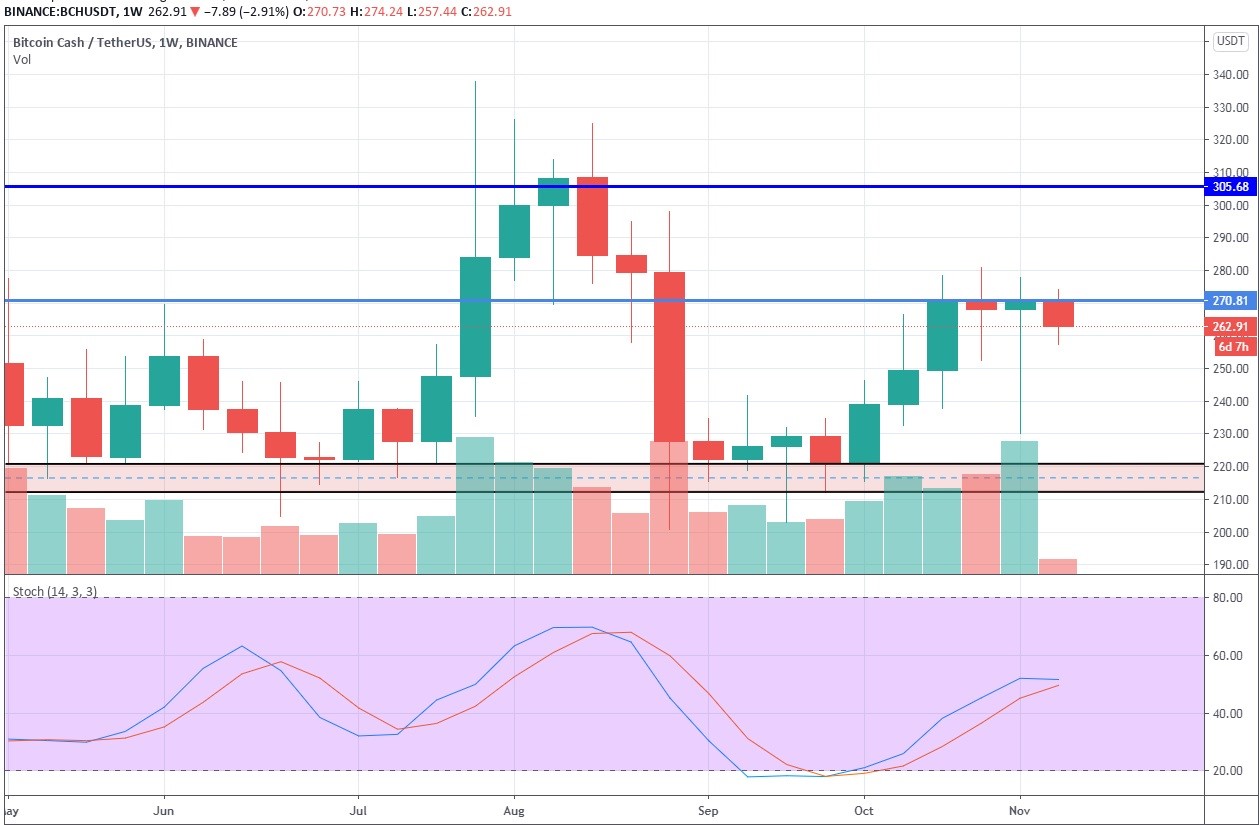 Stochastic doesn’t display a lot of eagerness to rise about the neutral zone, staying right at 50 with a slight inclination to the bearish side. The fate of the resistance at $270 is hanging in the balance because the previous weekly candle shows that the buyers have had enough power to reclaim $$268, but that push could have led to their exhaustion. This increases the possibility of a quick slide to $240 in the next two to three weeks.

On the daily time frame, the Ichimoku Cloud indicator offers confirmation of a mighty strong resistance that stands between $270 and $280 as the red Kumo cloud nearly takes up the entire space. 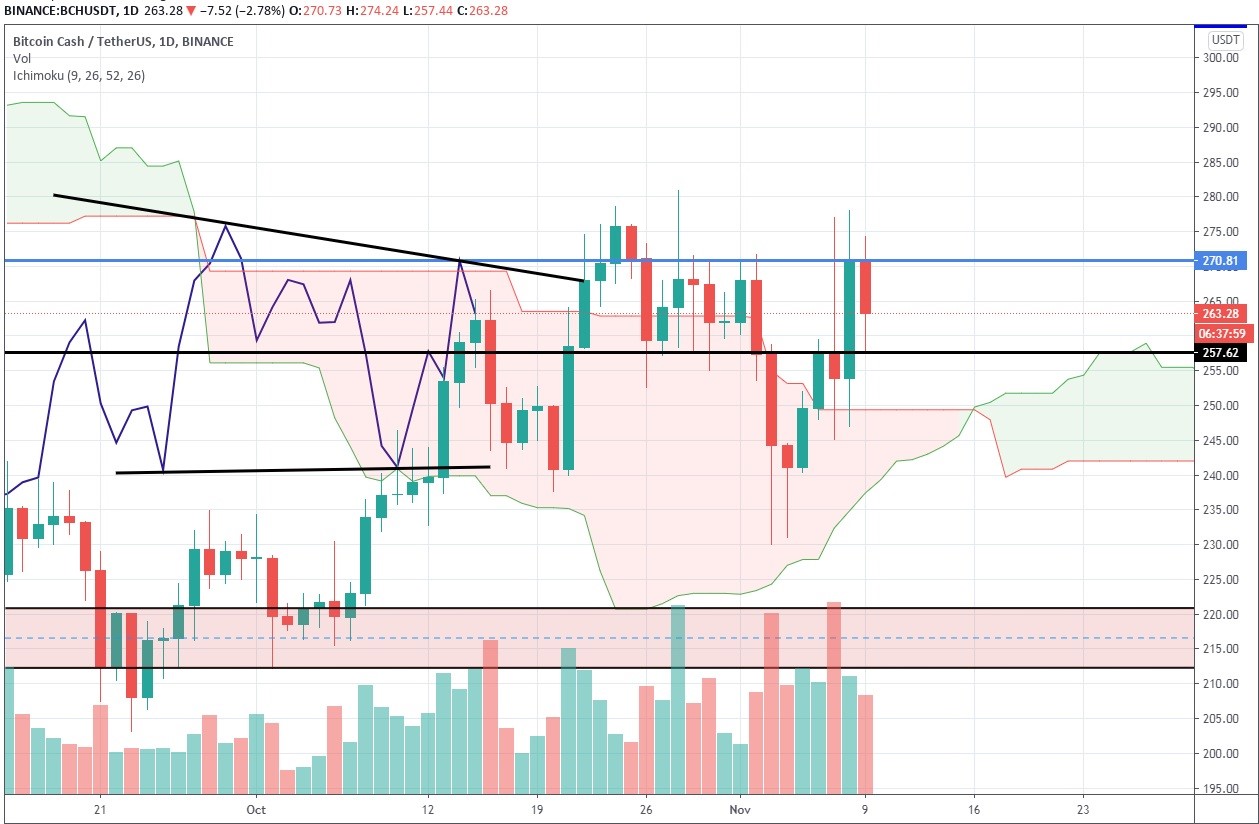 The lagging span of this indicator reveals that the price is forming a descending triangle pattern. Given the current situation, that pattern has a high likelihood of being resolved to the downside.