In our previous prediction article, we labeled Bitcoin Cash (BCH) as probably the most underperforming top altcoin, which, nonetheless, manages to maintain the 5th position in the global ranking, thanks to the respectable market capitalization of $4,8 billion and the average daily trading volume of $2.8 billion - a two-fold increase from the September showings. 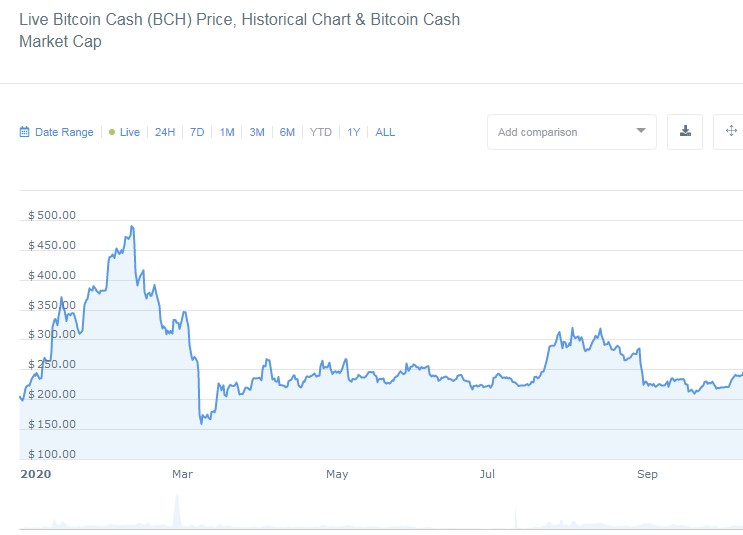 As of the time of writing, BCH’s value stands at $261.76 after the bullish day that brought it 3.6% to the upside. Bitcoin Cash spent the month on a positive note, having gained $13.44% against USD, went 6% to the upside in the BTC pair, and even outperformed ETH by 11%. Not bad for a coin whose progress has been stopped in its tracks during the selloffs in March and September. But now, after the disappointing V-shaped reversal from this year’s high at $325, and the subsequent revisit to $200, Bitcoin Cash is engaged in arguably the strongest bull rally since the one that occurred in July.

A failed breakout will keep Bitcoin Cash in the range

The weekly time frame shows how vigorously the bulls that have been defending the price level between $215 and $223, which we have established to be the strong support area that remains relevant for many months. 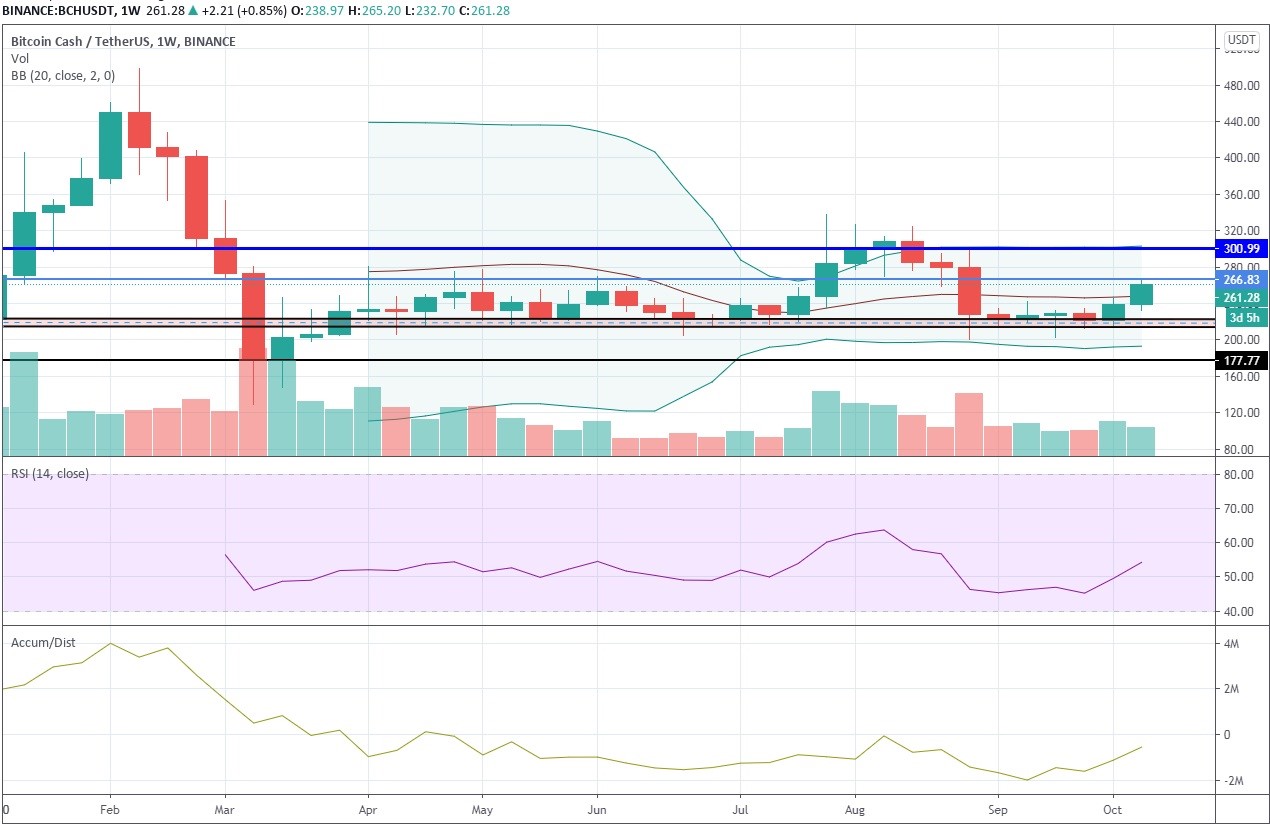 Last week marked a strong start to the presumed bull rally with a big engulfing candle that took out the month-worth of price action and got proper confirmation in the form of buying volume that also exceeded the one seen during the previous four weeks. Those who went long on BCH at last week’s close could have already scooped a 9% profit as the price kept pushing to the upside in the direction of the multi-month resistance line at $267 that also serves as the upper line of the long-standing consolidation channel.

In addition, that particular level of resistance coincides perfectly with the upper line of Bollinger Bands that reinforces our conviction that Bitcoin Cash will encounter a tangible rejection once the price tests $300. But we also take into account the reasonably high probability of the price attempting a breakout above that level if the buyers ensure the substantial bullish volume over the next three to four weeks.

You can see that both the 14-period RSI and the Accumulation/Distribution indicators are bullish on this time frame, which means that the ongoing bullish momentum is being supported by the corresponding volume, thus giving even more weight to the breakout expectations. 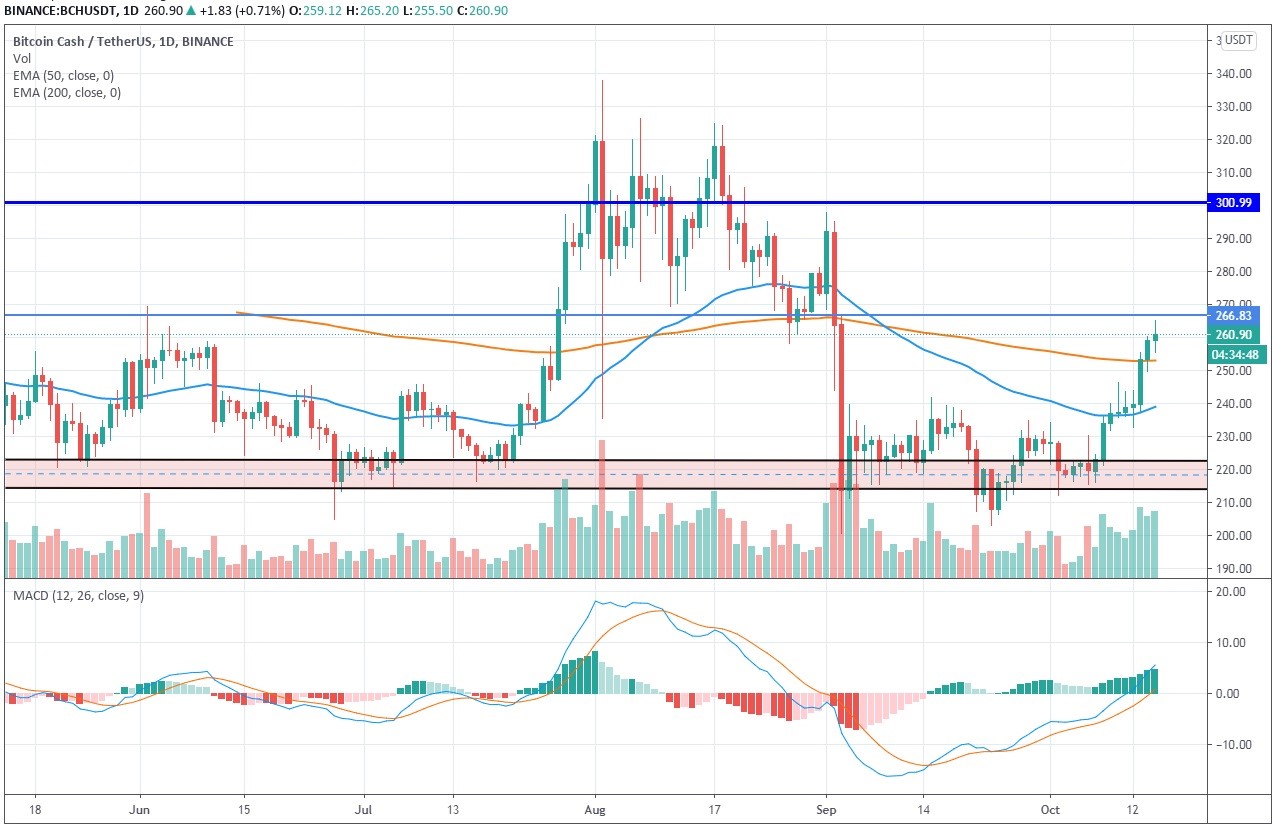 The daily time frame gives us an even clearer understanding of BCH’s bullishness as the price has already made its way above both 50 and 200 EMAs. Should Bitcoin Cash confirm the 200 EMA as temporary support, the break through $266, and the subsequent push to $300, would constitute the most probable price action scenario. Judging from the presence of a massive cluster of buying volume, and the fact that MACD didn’t get rejected at the zero and kept on traveling to the upside, the resistance at $266 won’t stand.