Bitcoin Cash has obviously lost all of its bullish steam after the halving that happened on April 8. The time before the event was associated with the massive exodus of miners, which led to a sizable drop of BCH hashrate. And although it has already partially recovered, the price of the cryptocurrency reacted very passively.

After a couple of retests of the horizontal resistance level at $275, the price went ranging while the gains from the past three months began to melt away slowly. The losses remain small: the USD value of Bitcoin Cash decreased only by 2% over the past 30 days, but the overall market outlook suggests that they could start piling up soon.

Bitcoin Cash is to encounter a decisive resistance

Right after the halving, BCH has stuck to the 50-period EMA, not being able to decide which way to go. In the meantime, the daily chart began to show the signs of the descending triangle pattern that is considered to be bearish in nature. And from the look of things, the triangle is highly likely to get resolved to the downside, which would mean a drop below the psychological level at $200, eventually. 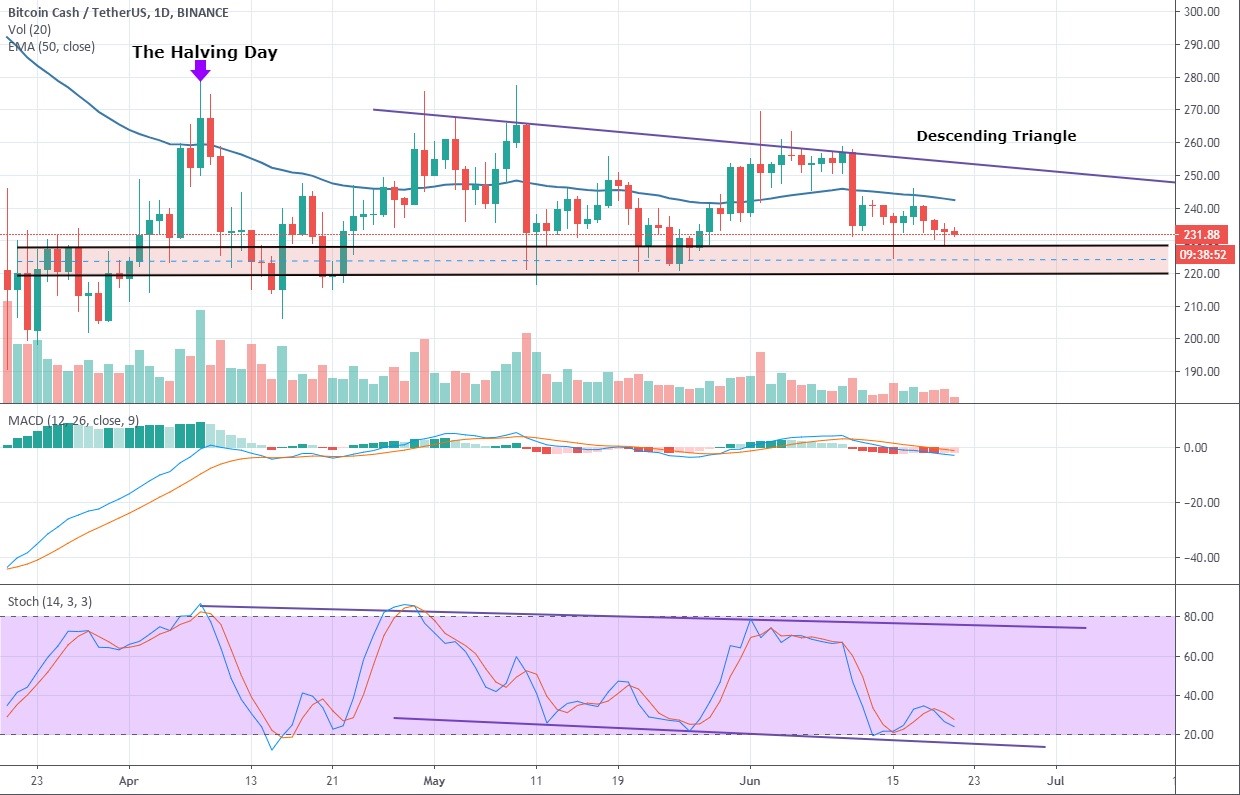 The most important price levels to watch right now are $228 and $220, which form the boundaries of a distinctive resistance zone that emerged after BCH recovered from the market collapse. Should Bitcoin Cash drop below $200, and further below the 50 EMA, the market could react with an avalanche sale, thus resolving the descending triangle to the downside.

Most indicators confirm the higher probability of BCH going south after this week’s close.

The volume analysis tells us that the bears seized the initiative after the last 8% price dump that occurred on June 11. The selling volume has been growing over the previous three days, which leads us to believe that the next daily red candle after this week’s close could break the resistance at $228 decisively, and later find support near the interim resistance at $223.

Once the price gets to test the resistance at $220, traders may expect a quick leap to the upside, most likely to the 50 EMA that should be at $240 by the time the upside move takes place. The sizable price dump will occur after the price tests the moving average and gets rejected, possibly followed by a short consolidation. That is the pattern the price has repeated time and time again, which provides the possibility for a successful short play.