Bitcoin Cash has gone from being one of the top performers across the entire cryptocurrency market to becoming an underperformer. Whereas its yearly gains currently stand at a respectable 161%, the coin’s showings in the period of the last 7 to 10 days were less than impressive as it recorded -15.3% against the US Dollar and - 13% against both Bitcoin and Ethereum. Has the BCH fairytale come to an end, and it’s time to jump on the selling wagon, or is it just a recuperation before another significant impulse to the upside?

Bitcoin Cash has become the talk of the town over the past several months as it had ousted Litecoin from the 4th spot on Coinmarketcap and then began the ongoing altcoin rally as one of the leaders in terms of overall gains.

Starting from January 3, when we saw the emergence of the morning star pattern, which later transformed into three advancing soldiers, the price of BCH had been moving by leaps and bounds, pumping vehemently and attracting the liquidity to this market. In less than months and a half, the fork of Bitcoin had inflated in value by the said 161%, making traders wondering when this miraculous rally is going to run its course.

Apparently, it happened somewhere around February 14 when the price growth stopped just a dollar short of $500, and then took a nosedive right below the 50-period moving average, which should have served as a warning sign that the trend structure is about to break. And so it did in two successive price drops and eventually landed at the mid-January - February resistance level at $370 - a 30% price degradation in a matter of three days.

Furthermore, this downward move took Bitcoin Cash all the way below the 200-period moving average, which should constitute a serious concern for traders who went long on BCH when it was on the rise.

Judging from the situation on the 4-hour chart, the coin will act in accordance with the following scenarios:

If the bulls decide to oppose the bears in their strive to push the price further down, BCH is going to consolidate within the $370 - $400 range, waiting for big players to bring something to the table;

Should bears maintain the initiative, the price of Bitcoin Cash could fall to the next support level at $309, marking the demise of the bull market that everyone was anticipating.

Therefore, those who went long on Bitcoin Cash when it was still at around $300 should seriously consider the possibility of placing stop-loss somewhere below the current support - no too tight, of course, but just enough to take at least minimal profits. Those who initiated the trade at $400 at didn’t take profit at the peak should entertain the possibility of cutting losses before the price moves even lower. 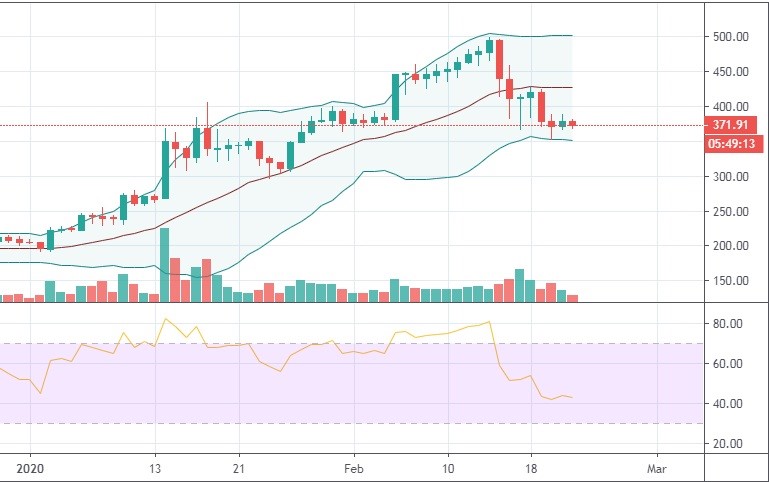 A similar picture is presented to us on the daily chart. With the shattered trend structure, BCH is hanging at the edge of the mentioned support, threatening to go lower at the next bearish day on the market. To make matters worse, trading volume has been declining substantially, while the 14-period RSI is sliding down to 40. The present situation is not favorable to Bitcoin Cash as it could become one of the biggest disappointments of the current altseason.